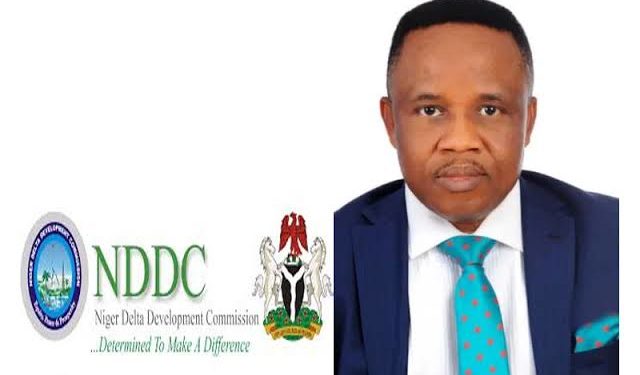 Niger Delta Peoples’ Forum (NDPF) has criticised the Minister of Niger Delta Affairs, Obong Umana Okon Umana, for what it described as “another antic to try and divert attention and attempt to continue the illegality of administering NDDC with a Sole Administrator contraption that is unknown to the law setting up the Commission.”

In a statement signed by its National Chairman, Chief Boma Ebiakpo, it noted that at the end of the Ministerial retreat for the Ministry and NDDC, the Minister spoke about his plans to “improve operational efficiency and accountability in NDDC with a Sole Administrator who is still administering the Commission in flagrant breach of the law – the NDDC Act.”

This, according to NDPF is “fundamentally flawed as the first step to ensure proper corporate governance and legality in NDDC is to put in place the governing board in line with the NDDC Act, which ensures equitable representation of the nine constituent states of Abia, Akwa Ibom, Bayelsa, Cross River, Delta, Edo, Imo, Ondo, and Rivers, in managing the Commission, in accordance with the law.”

The group noted that at this time, the expectation of Niger Delta leaders, youths, women, traditional rulers, civil society organisations, and other stakeholders is that the Minister of Niger Delta Affairs, Obong Umana Okon Umana will “implement President Buhari’s recent promise to inaugurate the Board of NDDC in accordance with the law.”

In what Ebiakpo described as “an alarming plan that is at variance with the NDDC Act and the mood of the region,” he emphasized that the group considers the Minister’s statement as “diversionary and an affront on the people of the Niger Delta region from a Ministry which has in the past three years supervised an illegal Sole Administratorship which is not fully representative of the nine constituent states, and which has carried on without due process, an abuse of the NDDC Act which the people have had to endure for three years.”

NDPF wondered why the Minister can attempt to talk about efforts to “usher in a new era of transparency and accountability,” with what it described as “an illegal sole administrator contraption that is evidently devoid of accountability, due process, transparency, checks and balances, when, sadly, the nine constituent states have been deprived of the opportunity of having their representatives who, sitting on the NDDC Board, are supposed to ensure that the budget of the NDDC is run in the way that what is due to each state gets to them.”

According to Ebiakpo, “it is unbelievable that the nine constituent states of Abia, Akwa Ibom, Bayelsa, Cross River, Delta, Edo, Imo, Ondo, and Rivers have been deprived of representation in the affairs of NDDC against the Act establishing the Commission yet Obong Umana talks about collaboration with all stakeholders.”

NDPF noted that Obong Umana’s statement “is certain to cause outrage in the Niger Delta region that is already agitated over the delay in inaugurating a substantive board, in compliance with the law to ensure proper corporate governance, and fair representation of the nine constituent states.” According to the group, this latest gambit clearly negates the Minister’s earlier commitment, on assumption of duty, that “NDDC will be repositioned and rebranded to achieve its core mandate.” Continuing, NDPF noted that “clearly, the preservation of a Sole Administrator or an Interim administration in the management of the Commission, in defiance of the law, is sure not a way to reposition the region’s foremost agency.”

According Ebiakpo, “the NDDC Act which explicitly states how the Commission is to be governed is clear on the process. The NDDC Act stipulates that the Board and management (comprising the MD and two EDs) shall be appointed by the President, Commander-in-Chief of the Armed Forces, subject to the confirmation of the Senate.”

The group however, regretted that in the past three years, “the Commission has been administered in breach of the law through illegal interim managements/sole administrator contraptions administering a total of N799 Billion approved budgets by the National Assembly for the 2019 and 2020 financial years. The 2020 Financial year for NDDC’s budget as approved by the National Assembly expired on March 31, 2022.”

NDPF cautioned that rather than “continue the illegality of administering NDDC with a sole administrator contraption that is not known to the NDDC Act, we urge the Minister of Niger Delta Affairs to implement President Buhari’s promise at the just concluded retreat of his Ministry and NDDC, to halt the ongoing charade at NDDC, abide by the law and inaugurate a substantive governing board for NDDC to ensure proper corporate governance, checks and balances, probity, accountability, and equitable representation of the nine constituent states that have endured three years of the Commission being run like a personal fiefdom.”

The group also drew the attention of President Buhari, Obong Umana, the Federal Government, and indeed the ruling All Progressives Congress (APC) to a “scathing editorial” by ThisDay Newspaper earlier in the year, on Wednesday, January 12, 2022, titled “THE MERRY-GO-ROUND IN NDDC.” It quoted the paper as stating that “The Niger Delta Development Commission (NDDC) is becoming an object of jokes among critical stakeholders. All that Nigerians are regaled with are tales and empty presidential threats while the Minister of Niger Delta… continues to run the commission with some nebulous interim management committees that are unknown to law.”

NDPF urged President Buhari and the Federal Government to “resist attempts by certain officials in this government to goad them into further acts of illegality in administering NDDC by not acquiescing to this latest diversionary act to further administer the funds of the Commission and should therefore end the illegal interim sole administratorship at NDDC and inaugurate the substantive Board of the Commission in accordance with the law.”

Ebiakpo recalled the President’s earlier promise to inaugurate the board after the forensic audit. He stated that President Buhari promised the nation on the 24th day of June 2021, while receiving the leadership of Ijaw National Congress (INC) at the State House in Abuja that the “NDDC Board would be inaugurated as soon as the forensic audit report is submitted.”

The President said: ‘‘Based on the mismanagement that had previously bedeviled the NDDC, a forensic audit was set up and the result is expected by the end of July, 2021. I want to assure you that as soon as the forensic audit report is submitted and accepted, the NDDC Board will be inaugurated.” However, according to Ebiakpo, eleven months after the submission of the report on September 2, 2021, the board is yet to be inaugurated.

Ebiakpo also reminded the Minister and the Federal Government that “whereas the North East Development Commission (NEDC) has been allowed to function with its duly inaugurated board (since May 2019) in line with the NEDC Act, thereby guaranteeing proper corporate governance, accountability, checks and balances, and fair representation of its constituent states, the NDDC on the other hand has been arbitrarily managed in the past three years by interim administrations/sole administrator, in flagrant violation of the law establishing the Commission.”

NDPF therefore urged the Federal Government, President Buhari, and indeed the ruling All Progressives Congress (APC), to be “concerned about the disdain of the Niger Delta people over the manner the NDDC has been handled, most especially administering the Commission with illegal interim managements/sole administrator contraptions for five years in this administration’s seven years in office, and therefore needs to end the ongoing illegality in NDDC if this government is to be remembered for good in the Niger Delta.”

The group further cautioned that the “continued illegality of the interim managements/sole administrator contraptions administering NDDC since October 2019 in breach of the law, NDDC Act, is a national embarrassment that should be of grave concern to the Federal Government and President Buhari, most especially for his legacy when he leaves office in May 2023.”

NDPF said that it aligns with other Niger Delta “authentic stakeholders to reject in its entirety the Ministry’s stated plan to further use an illegal sole administrator contraption to administer the funds accruing monthly to the Commission when the sole administrator position is unknown to the law setting up NDDC.”

The group expressed concern that “presently, the illegal NDDC Sole Administrator singularly acts as the Managing Director, the Executive Director of Finance and Administration, and Executive Director of Projects, with no checks and balances, proper corporate governance, and probity in administering the Commission as stipulated in the NDDC Act which separates these functions to ensure propriety in administering the Commission. To the detriment of the entire region, these illegal interim contraptions/sole administrator contraptions have been fleecing the NDDC of its funds in the last three years.”

The group also pointed out that no less a person than the President of Ijaw National Congress (INC), Professor Benjamin Okaba, in an interview with a national daily on October 17, 2021, stated that there has been “unceasing irregularities and lack of due process in NDDC since October 2019 when the illegal interim managements/sole administrator contraptions have been in place, administering a combined two-year budget of N799 Billion for 2019 and 2020, as approved by the National Assembly.”

The Niger Delta Peoples’ Forum therefore urged President Buhari and the Federal Government to “halt the ongoing breach of the law governing the operation of the commission, the unfortunate disregard for the rule of law, and hearken to the unending calls, demands and peaceful agitations of youths, men and women, political and traditional leaders and civil society organisations for the inauguration of the board of NDDC. This will ensure compliance with the NDDC Act, promote and sustain peace, equity and fairness, transparency and accountability, good governance and rapid development and transformation of the Niger Delta Region.”