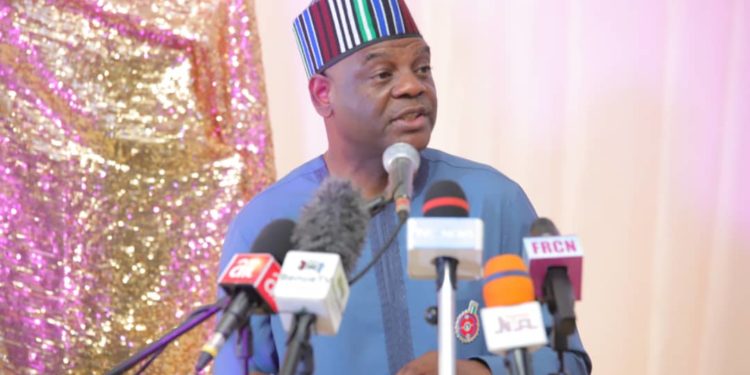 The executive secretary of Tertiary Education Trust Fund (TETFund), Arch sonny Echono, recently marked 100 days in office, having assumed the mantle of leadership on the 21st of March 2022.

However, directors and other senior staff of the fund have taken the opportunity to hail the executive secretary over the reforms he has introduced in the Fund within a short period.

Speaking recently when they were featured on TETFund Television, the staff commended the ongoing reforms, saying the agency was lucky to have Echono as the executive secretary.

“Since the assumption of the Es, precisely on the 21st March 2022 there has been a flow of activities at the Fund. We believe this is driven purely by his patriotism and selflessness.

“He has brought reforms with the intent of taking of this organisation to a higher level and we believe this definitely will go a long way for our tertiary institutions and therefore, we decided that to commemorate his 100 days in office, we highlighted some of the activities that took place within that period,” he said.
Barr Adamu Abubakar, the director, Human Resources said the staff are happy to have Echono who had served as a board member in the Fund.
“TETfund is lucky to have him because he has been one of us. He has served on the TETFund board of trustees for the last four years as a board member.
“Now, he is coming as a chief executive of TETFund. So we are lucky to have one of them coming back in a bigger capacity.”
Also, Barr Bashir Haruna, head Internal Audit Unit (IAU) said the laudable reforms in the department cannot go unnoticed.
“As part of the reform to step up project life cycle implementation, finishing projects on time, the audit clearance will now be issued at the last tranche for the beneficiaries to finish their project. I think this is a laudable achievement for him,” he said.
Arch Enuwo Inene, director Strategic Planning (SP) commended the relationship with the Federal Inland Revenue Service FIRS under the new leadership.
“The Other area of reform we would like to say is in the area of our interaction with Federal Inland Revenue Service FIRS.
“He had always said at different fora that the collection is in nerve with our activities at TETFund and he has shown that seriousness because one of the visits he made as executive secretary was to the chairman of FIRS.
While saying Echono’s first one hundred days has been eventful, Dr (Mrs) Gloria Olotu, director Finance and Investment (F&I) said the disbursement rate has been phenomenal.
“As we speak, over N79 billion has been released to us by the FIRS for the year and we have disbursed, inclusive of what we had last year over N90 billion, as we speak, the disbursement rate is phenomenal.
“I wish to congratulate him on his first 100 days in office. They have been very eventful, a lot has happened within a short time.
Arch Uchendu Wogu, director, executive secretary office noted that the Fund has been on a steady move since Echono took over as the executive secretary.
“One of the first assignments he issued upon assumption of office was for us to open up contact with the CBN, FGIRS, the regulatory agencies, NUC NBTE and NCCE and then of course, the beneficiary institutions.
“So we have been in a steady match. He is one of a kind and I must say it on record that we are lucky to have him as the one in charge at this time,” he added.
Buhari Mikailu, director Physical Infrastructure (PI) said there has been underground work on how to improve the quality of TETFund projects.
“This department, the first issue that came up in trying to work in line with his agenda is how do we change from having those match box structures into iconic structures, then improving the quality of TETFund projects in all the tertiary institutions.
“Two things are involved there in which we have started the ground work in improving the process of getting the submissions and ensuring that quality designs are approved for institutions, then supervision and monitoring is also important.”
On his part, the Echono assured that his administration would build on the solid foundation that has already been laid, especially in the area of promoting content development and research and development (R&D).
He has delivered with a range of achievements that build on his vision to drive the nation’s economy through industry-academia relationship, dwelling on the need to build a symbiotic relationship between the industry and academia to ensure seamless production of manpower needed to drive the nation’s economy and even produce in excess for export to other countries.
The TETFund boss said he would focus on curriculum delivery in tertiary institutions in Nigeria to make the nation’s graduates more relevant and not just employable but creators of wealth while focusing on capacity building and staff development and effective service delivery.
To keep to his promise, by March this year, Echono received the Governing Council of the Federal University of Health Sciences, Otukpo led by the Vice Chancellor, Mallam Abdullahi Abba, calling on higher institutions in the country to prioritize specific programmes and boost the human capacity development components in their TETFUND allotted funds.

ISLAM COLUMN: To Every Pilgrim And Hajj Tour Operator

ISLAM COLUMN: To Every Pilgrim And Hajj Tour Operator