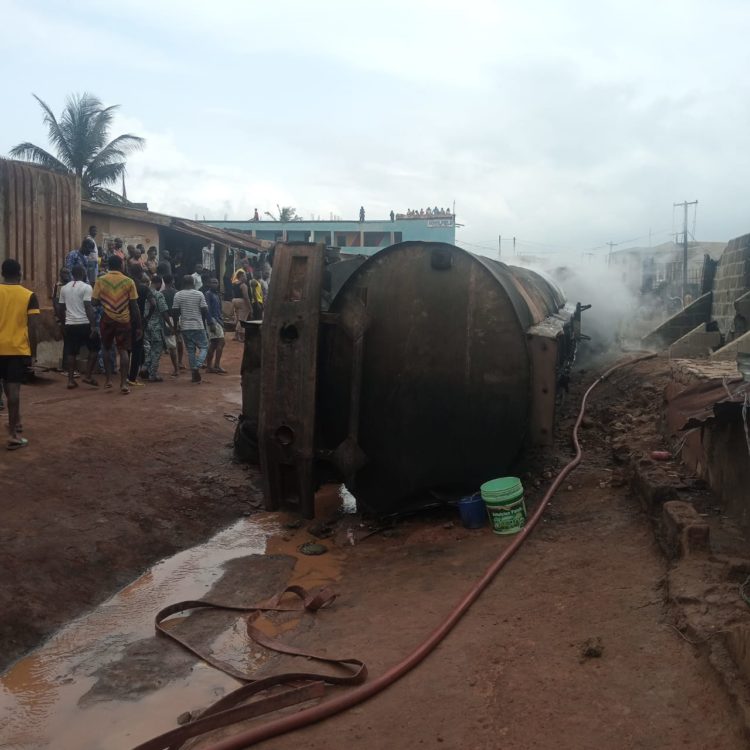 At least two persons were confirmed dead, while three others sustained varying degrees of burns following a petroleum tanker explosion, which happened at the early hours of Thursday at the old Toll Gate Plaza of the Abeokuta – Sango Ota – Oshodi expressway.

The duo of the Federal Road Safety Corp (FRSC) and the state-owned Traffic Compliance and Enforcement agency (TRACE), who confirmed the accident, explained that the faulty fuel-laden tanker rolled back and fell on it side, thereby spilling its content on the road which later caught fire and thereafter exploded.

The FRSC Public Education Officer, Florence Okpe, who confirmed the accident to journalists on Thursday in Abeokuta, explained that a total of 12 vehicles that included three luxurious buses belonging to the Lagos State Bus Rapid Transport (BRT); four tricycles; three motorcycle; a commercial bus painted in the colour of Lagos transportation and the tanker were burnt in the inferno.

Okpe further stated that property worth several millions of Naira were also gutted in the inferno that ravaged the stalls in the area.

For his part, the TRACE Public Relations Officer (PRO), Babatunde Akinbiyi, who also confirmed the accident, disclosed that the driver of the PMS-laden tanker truck was also trapped inside the truck, while the second deceassed, who was burnt beyond recognition, was later discovered under the truck when it was being towed away.

Okpe, however, maintained that a total of three persons were rescued to the State Hospital in Ota, while corpses of the deceased were equally evacuated to the morgue of the same hospital.