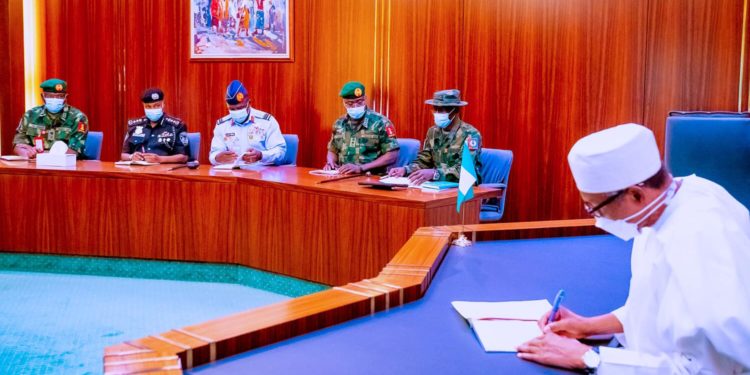 Given the worsening insecurity in the country, President Muhammadu Buhari held two security briefings in less than two weeks.

No doubt, the insecurity in the country is at an all-time high. In Abuja since the Kuje prison break, security officials have been placed on high alert.

Last week the troops of the 7 Guards Brigade which provides security for the Presidential Villa and the FCT were attacked by gunmen suspected to be terrorists.

They were ambushed while on patrol along the Kubwa-Bwari Road in the nation’s capital. Sadly two army captains and one soldier died as heroes battling the insurgents.

Also, bandits on Thursday at about 8 pm attacked the 102 Battalion Military checkpoint on motorcycles but met stiff resistance at Zuba. Following the attack, a heroic soldier killed two bandits before paying the supreme price. According to sources, the bandits who failed in their bid, dissolved into the Gauraka community and environment causing fear and panic.

Also in the Dawaki/ Dutse axis on Thursday night, robbers walked into a popular eatery, and phones and cars were stolen.

There have been several security warnings of impending attacks in Abuja and its environs by Boko Haram and bandits.

Recall that the governors of Niger and Nasarawa states have warned severally that Boko Haram was in their states and it’s just a matter of time before they move to Abuja.

Also because of the worsening insecurity, opposition lawmakers in the National Assembly called on Buhari to arrest the slide into anarchy in 60 days or face impeachment.

Sadly, the chicken has come home to roost. The tension in Abuja can be cut with a knife as major gardens and areas are deserted at night for fear of being in the wrong place at the wrong time.

After the meeting, the National Security Adviser (NSA), Major General Babagana Monguno (rtd), disclosed to State House correspondents that the National Security Council is working on new strategies to curtail the worsening insecurity in the country as it observed that Nigerians are tired and gravitating towards self-help.

According to him, the country is in a difficult situation, saying that the President is aware of the people’s concerns about the growing insecurity.

He revealed that the Security Council has agreed on new strategies to curtail the menace,  assuring that there will be a renewed momentum against terrorism.

The NSA also revealed that Council is in the process of winding up a special investigation on the Kuje Correctional Center attack to hold those found negligent accountable for their actions.

He urged the media to be circumspect in what they publish from terrorists, appealing that they should consider the consequences of such materials.

He said “today’s meeting was convened by the President, as a continuation of the meeting that took place last week to discuss the technical issues and the taskings that were given to the various security agencies.

“The meeting deliberated on all those issues, after the brief by the National Security Adviser, which is usually the procedure. Again, the council deems it necessary to inform the general public, that fighting this type of asymmetric conflict is a collective effort.

“It’s not something that should be confined to only the security, intelligence, and law enforcement agencies. When we keep saying the whole of society approach, the whole of government approach, to get a whole of nation approach, what it means is that everybody has to partake in this enterprise.

“The truth is that no country can ever overcome the difficulties of an asymmetric conflict because the enemy of the state is embedded within the population within the wider society.

“It is true that the local people are averse, they’re scared, they’re worried and there’s no confidence. That is understandable. But without their support without the cooperation in terms of giving information, it makes it very hard for the operational elements

“. A few days ago, troops of the guards’ brigade were ambushed and decimated. Had there been a collective effort by way of just snippets of information we might have averted that incident, that is not to say that the responsibility is for those outside the security domain. It’s a collective responsibility.

“Furthermore, counsel is also concerned about the nature of media reporting incidents with regards to insecurity.

“It is important for the media to understand that certain reports being generated by the media, either the way the manner in which they report can also aggravate this delicate situation.

“So Council is urging the media to be very careful in whatever it reports, whatever gets out to the public space, can have a debilitating effect on the population.

“Equally, the political elite is also urged to take into account the consequences of utterances, especially from people who have established a reputation, people who are considered leaders of thought, people who are considered to have some kind of influence in society, whatever goes out, may be harmful, not just to the government, if that is the intention, which I doubt may not be a deliberate thing, but at the end of the day, it will affect the wider society.

“We are in a very difficult situation. And Council understands. Mr. President understands people’s concerns about the growing insecurity.

“But I can assure you that there’s no straight cut and dried method of dealing with this thing unless all of us embrace each other.

“I know people are weary people are tired people are beginning to gravitate to other places for self-help. The truth is that help is rooted in everyone working for the other person.

“Again, the members of the armed forces have also committed that in the coming weeks, they have already started working on a new strategy to deal with these snippets of violence.

Gbajabiamila, Wase And Illusion Of Reality