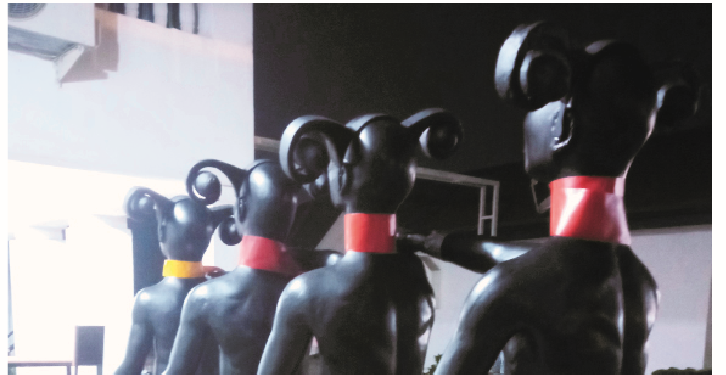 At the exhibition Blazing Century I, viewers are scarce. Art exhibitions have never been a favourite past time or conversation starter for Nigerians, and it draws even less crowd when it showcases ‘demonic images’ images whose aesthetics at first glance scares the bejesus out of its viewer.

The ‘demonic images’ are black-skinned females one crouched, staring full-frontal into the camera, another black-skinned female seemingly bathing from oil polluted creviced waters and a quartet of horned, black skinned boys floating on a gas tank, close to a sea shore. Yet others, hold images of a horned, red-skinned female in various poses amidst some futuristic technology. In a particular image, she is surrounded by two red-skinned horned males. She reveals a symbolic baby in a capsuled machine of sort. The red-skinned woman, clearly the protagonist of the exhibition is strong, and attired in a long futuristic military robe and has that rigidity, absent-minded stare that is reminiscent of weird characters in a Star Wars flick. These are Wilfred Ukpong’s vision of a futuristic Africa.

Nigerians reaction to the exhibition range from shock and disgust, to boredom and nonchalance. For instance, the artist’s mother upon citing the work during its exhibition at the Texas Biennale, yelped, “Blood of Jesus,”; Others said, “These images are demonic,” and a young girl who was visiting the gallery in Abuja during its installation shuddered, “I cannot imagine what inspired this artist to do this”, to which Ukpong flippantly reacted, “Oh! He was demonically influenced.”

Even, influential friends he had to drag along to the exhibition in Lagos, lacked interest in the art pieces, and attended for the aesthetics of the exhibition venue, the Mike Adenuga Center, rather than the interesting dialogue of socio-environmental issues, and a futuristic Africa it is stirring among the international community. The height of reactions, was Ukpong’s citing of two viewers dozing off mid-screening of the video installation of Blazing Century I, at the Abuja exhibition.

Ukpong says there are viable reasons why Nigerians do not care for Afrofuturistic works as Blazing Century I, a work that is apparently raising awareness of socio-political issues and environmental degradation that directs affect them.

First, the average Nigerian, he said is not interested in art or ecological matters because he is occupied with thoughts of survival, and how to feed his family. Second, the richer class are more interested in amassing wealth; third, and perhaps the most important, is the neo-colonial mindset which prevents Nigerians from placing value on anything until it is viewed so by westerners.

Understanding the above factors, hardly minimized how hurt the artist felt, devoting ten years of his life to the project and telling the peoples (Niger-Deltans locals) stories, with no interest from Nigerians. Yet, he has no intent on mellowing his subject or its visual interpretation to carry the people along.

Consequently, much is lost in the translation of these images by the few Nigerians who visit the exhibition. For instance, the fact that the aesthetic red and black colours bear double symbolism – the black skins represents oil, and loss of lives experienced in the Niger-Delta region; but also signifies the culture of a certain tribe of people in the region; the horned worn by the photos subjects is a nod to a tribe in the south-eastern part of the country; and the long militarized robe are reminiscent of colonial impact on fashion in the southern part of Nigeria. Nigerians did not only lose an opportunity to discover more about her history, but also truly engage on issues that presently plagues the country. They are not the sole losers here, Ukpong’s adamancy not to simplify his visual interpretation of his subject of discuss, means he may never gain a genuine local audience or interest in the purchasing his works. And on occasion, regret for dedicating ten years of his life to the work.

“So much time and money has been put into this, to the detriment of my family. And I just have to survive through it, hoping that better things will come.”

While recognizing the efforts of young Nigerian artists pushing the boundaries to create works that drives the population to ‘think’ more, he is not too optimistic.

It is not easy to create works like these, because you need to think about how to take care of your family. I don’t think I want to do this again, because ten years, and spending so much money, hoping that there will be monetary returns someday, nobody bought anything today. My worried family is asking, “Oh! You are spending so much, when are you going to see returns? What about the money for holidays?”

Perhaps, the sadder aspect, is the lesser impact he’s had on the lives of the locals who were his muses, and who depended on him for their career take-off, Ukpong lamented. Two of the females in the photographs have succumbed to prostitution in Dubai, and France; one of the younger lads on the floating gas tanks, is dead; and the artist has had to help pay the school fees of one the local female subjects. Hence, his establishment and hope to fund the Creative Academy of Art Foundation – an art, creative and cultural space with some of the proceeding from the sales of the exhibition.

While he aims to continue exhibiting globally, Blazing Century I (maybe even Blazing Century II), he is also taking a commercial cinematic approach to the work. One that this time, will attract Nigerians interest.

Definitely, a way of mellowing the subject matter, but he thinks not.

“I have done the artistic film which accompanied the exhibition. I am going to do something commercial. This does not represent me as an artist, but as a filmmaker. This is about gravitating to the filmmaking realm and to see how to create a commercial work that has an Indie kind of artistic work that has a mainstream appeal. But I know if you tell a sensational story (particularly when you go commercial) people will tune in.

“Nigerians will be attuned to that once it is acknowledged to be made by my film studio Blazing Century Studio, Heaven, Texas US, in partnership with films companies in the US. When Nigerians know the work is talked about outside the country, and shown in foreign cinemas, they will go see it,” said Ukpong.

Ukpong is further working on an Afrofuturist film that combines the spiritual, physical and virtual worlds called Metaland.

“Meta in the Yoruba context means three. Meta is also from Facebook’s metamorphosed state Metaverse, a virtual reality. It is a world where you have this virtual, and physical component. The fusion of these two worlds culminate in this third world (Metaland) that I am talking about,” concluded Ukpong.