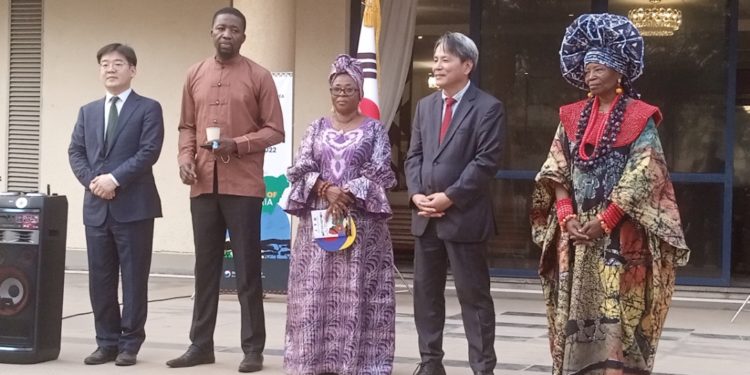 South Korea has appointed Nigeria’s veteran and renowned artist, Nike Okundaye, as it’s goodwill ambassador in its bid to host the 2030 World Expo in Busan.

The Embassy of Korea held the official conferment of award ceremony at the Nike Art Gallery, on Wednesday, August 10.

Organised by the Bureau International des Expositions, the World Expo is an international exposition designed to showcase the achievements of a nation. It is dedicated to finding solutions to the challenges of the present times via the exploration of a universal theme through engaging and immersive activities. Held every five years, the expo is site specific, stretching up to a period of three to six months. Toronto, Canada is set to host the World Expo 2025.

In 2021, Korea submitted a bid to host the World Expo 2030, and the appointment of the world renowned artist Okundayo, is part of its effort at gaining Nigeria’s support in the bidding.

Its choice of Okundaye and Korea’s second largest city, Busan is quite strategic. Okundaye, a prominent batik and adire artist champions the promotion of Nigerian and African artistes. She has trained hundreds of women in art making skills from performative art to painting, batik and adire arts production. In collaboration with the Embassy of Korea, Nike Art Gallery hosted the 2021 Female Association of Nigerian Artists Exhibition in Abuja. She also designed Nigeria’s pavilion at the World Expo Hannover, Germany in 2000.

As Korea’s second largest city, Busan is a economic hub, with a vibrant seaport that interconnects the Eurasian continent and the Pacific Ocean. It boasts top notch infrastructure including airports and high speed railways, and is home to international events such as the Busan International Film Festival (BIFF). Busan is no newcomer to hosting global events such as the 2002 Asian Games and the 2002 APEC Summit.

Korean Ambassador to Nigeria, Kim Young Chae in his address said Busan embodies Korea’s theme choice for the 2030 World Expo, which is Transforming Our World, Navigating Towards A Better Future. The theme is a testament of how Korea within the past 60 years moved from a developing nation to a donor nation, and today is a global ICT powerhouse, and amongst the leading nations in the field of technology, particularly in The Internet of Things (IoT), Big data and Smart Mobility. In addition, the country wields a strong soft power via Hallyu, it’s exportation of Korean culture – Korean films, dramas, KPop, KFood, Sports among others.

Working in partnership with the Embassy, Okundaye will enhance support base for Busan 2030 Expo via her network of friends, patrons and gallery visitors.

Residents Of Shimfida Community Return After 5 Months As IDPs

Residents Of Shimfida Community Return After 5 Months As IDPs