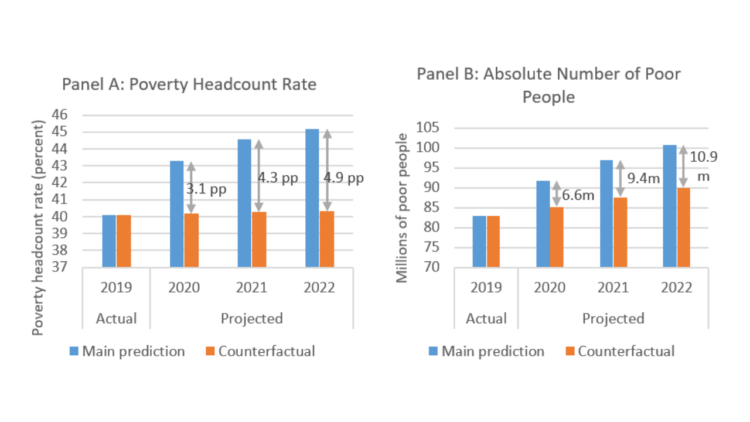 The poverty level figures just released by the National Bureau of Statistics (NBS) which claimed that 133 million Nigerians are multidimensionally poor though alarming, did not come as a surprise. The international community’s perception of the country as the poverty capital of the world had earlier taken the wind off its sail thus reducing the shock element in the disclosure.

It is instructive to note that in the 2022 Multidimensional Poverty Index Survey released recently in Abuja, the NBS pointed out that the figure represents 63 percent of the nation’s population. It is, indeed, something to worry about for an administration that came into office with the promise to pull most Nigerians out of the poverty threshold.

For effect, NBS added that the poverty index is mostly experienced in rural areas especially in the north with women and children being the most affected. The survey was conducted by the NBS, the National Social Safety-Nets Coordinating Office (NASSCO), the United Nations Development Programme (UNDP), the United Nations Children’s Fund (UNICEF), and the Oxford Poverty and Human Development Initiative (OPHI). The measure used to arrive at the figure was based on Multidimensional Poverty Index (MPI) with five components of health, living standard, education, security, and unemployment.

In the considered opinion of this newspaper, this is a damning statistic and a wake-up call for all leaders at all levels of governance in the country. The question on the lips of the people is how did the nation get so low?  By way of conjecture, it is easy to blame insecurity in the north as a result of banditry, Boko Haram insurgency as well as farmers/ herders’ clashes for this poor state of affairs. But put appropriately, corruption in high places should take the cake for reducing the people to the level of paupers.

Analysing the insecurity component, the Centre for Democracy and Development (CDD) had disclosed that at least 60,000 people were killed in Nigeria’s 19 northern states in the last 10 years due to insecurity. In a report by CDD titled “Multiple Nodes, Common Cause: National Stocktake of Contemporary Insecurity and State Responses in Nigeria,” the CDD said in the Northwestern states of Jigawa; Kaduna, Kano, Kebbi, Sokoto, and, Zamfara about 14, 000 people lost their lives between 2011 and 2021.

Regrettably, in our view, the insecurity has also prevented many people specifically in the rural areas from accessing their farms. Besides, agriculture is the main occupation of most people in those areas. This has considerably increased the number of poor people in rural areas.

It is gratifying to note that President Muhammadu Buhari has vowed to leave Nigeria a safer country by the time he will be leaving office in 2023. With recent reports of military exploits against terrorists and bandits, the president’s pledge may, if sustained, become a reality.

We also call for financial autonomy for the local governments. The absence of governance at the local government level is a catalyst for insecurity. In addition to this is the intensification of the war against corruption and the election of leaders with a vision.

It is pertinent to stress that lifting millions out of poverty is not rocket science. All it takes is good and committed leadership. The time has come for leaders at all levels to start to deliver the basic minimum of governance. In our view, people-centered policies by the state and the federal governments should be on the front burner.

Besides, good governance translates to the growth and development of any country. The more people feel the impact of good governance, the more they are lifted out of poverty.

But should Nigerians really be talking about poverty at such abysmal levels? The nation is blessed with abundant resources, human and material which, with a purposeful leadership, will make any talk of poverty out of sync with reality.

What is required at this time, in our opinion, is a deliberate policy re-engineering that will bring about attitudinal changes in the government and the governed in such a manner that will impact positively on the polity. We insist that good governance and judicious deployment of resources can reduce the spates of insecurity and all its negative manifestations which include, primarily, poverty.

The Suffering Children Of Nigeria!

The Suffering Children Of Nigeria!