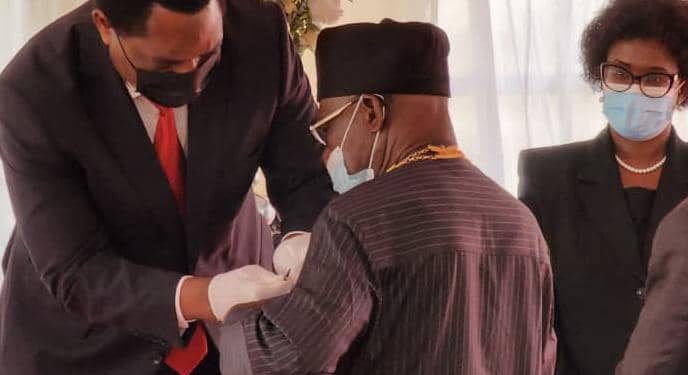 Former President Olusegun Obasanjo alongside two other former African presidents were on Thursday honoured by the Zambian Government for the role they played in advancing the cause of the African continent.

At the event, which held in Lusaka, the capital city of Zambia, the former Nigerian leader and elder statesman was conferred with the Zambia’s highest national honour of “Order of the Eagle” by the country’s President, Mr. Hakainde Hichilema.

In a statement issued in Abeokuta, the Ogun State capital and signed by Obasanjo’s special assistant on Media, Kehinde Akinyemi, two other African leaders honoured alongside Obasanjo were former Presidents of Liberia, Hellen Sirleaf-Johnson, and her Sierra Leonean counterpart, Ernest Bai Koroma.

Akinyemi in the statement explained that the honours bestowed on the tree former Presidents were contained in a Zambian Government’s official gazette notice signed by the country’s acting Secretary of the Cabinet, P.K. Kangwa with reference No: 7146, Vol. LVIII, No. 72, “the gazette notice No.1067 of 2022 of the Constitution of Zambia”.

Speaking on behalf of all the awardees, Obasanjo disclosed that the honour would serve as an encouragement to do more for the continent.

“On behalf of the awardees, I wish to thank you for the honour done us. We take this honour as encouragement to do more.

“Whatever we have done for Africa and for humanity to make you honour us, we assure you we will do more,” Obasanjo said.