Oyeyemi Gets Showers Of Praises For Reforming FRSC 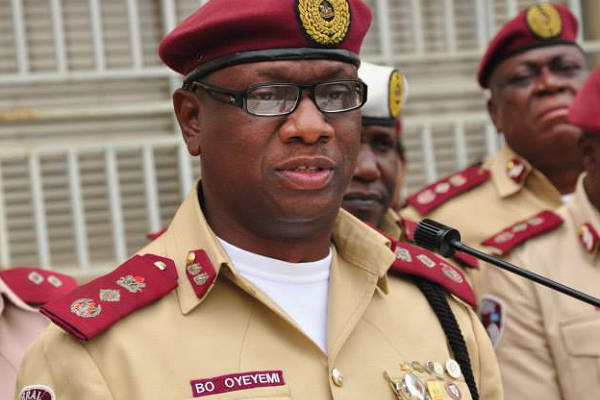 They spoke  at the first corps marshal valedictory lecture held in honour of Oyeyemi in Abuja yesterday.

The chairman of the FRSC board, Bukhari Bello said the excellent work done by the retiring FRSC boss has made it necessary for the president to look inward and appoint the next corps marshal from the current officers.

Bello said this would ensure continuity and stabilization within the FRSC and give the officers the confidence to continue to do a good job hoping that one day, they will be rewarded with the highest position.

Also, the secretary to the government of the federation, Boss Mustapha said, “There is no gainsaying that the present FRSC administration under the leadership of Dr Boboye Oyeyemi has achieved landmark progress in the history of the Corps.

“The unflinching support from the federal government was utilized judiciously and converted economically to the establishment of new institutions under the FRSC, building the capacity of its personnel, alignment with international standards, adoption of The Nigeria Road Safety Strategy (NRSS I &II) and organs which was approved by the federal executive council on 10th December, 2020. Indeed, he is a strategist and a visionary leader.

“I am therefore highly delighted to be a part of the success story of the outgoing corps marshal and reiterate the commitment of president Muhammadu Buhari’s administration to FRSC in achieving a country where road traffic crash results to no death.

“I also implore for the continued cooperation of all and sundry in advancing road safety and national security through the cross-fertilization of ideas and knowledge sharing on the platform provided by the Federal Road Safety Corps.”

Also speaking at the function, the retiring corps marshal, Oyeyemi, while giving account of his activities from 2014 to date, said over 10,000 staff have been promoted.

He also stated that about 241 houses have been built and delivered to the officers and men of the FRSC, while about 108 houses are under construction.

Within the same period, the corps marshal said 12 state command offices have been built while three others are under construction.

Oyeyemi, who is one of the seven men that established the FRSC, will be retiring on Monday July 27, 2022.

Will Machines Replace Journalists, Too?

Will Machines Replace Journalists, Too?