by Emmanuel Mgheahurike
in Cover Stories
0 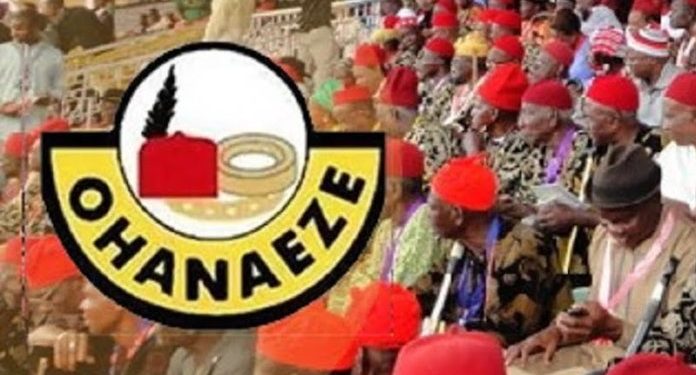 Ohanaeze Youth Council (OYC) has declared political war on Igbo delegates who voted against aspirants from South East at the just-concluded presidential primaries of the Peoples Democratic Party (PDP) and the All Progressives Congress (APC).

The group x-rayed the height of betrayal and sabotage by what it described as “a few microscopic political elements to enslave the present and future generations of Igbo extraction, the council resolved that lgbo land is not a habitable for all these enemies of Ndigbo.”

Addressing reporters yesterday in Owerri, the Imo State capital after the council’s meeting, OYC national president, Igboayaka O. Igboayaka, lamented on how Southeast delegates sold the future of their children and unborn generation in the course of the recently concluded primary elections of the leading parties in the country.

He said: “It is a clear betrayal and historical sabotage for delegates whom we assigned to go and vote Southeast aspirants, went to Eagle Square Abuja and sold the future of our children. This is a typical breach of trust and they have shown that they can’t be trusted with leadership mandates in Igbo Land.

“Certainty there will be “Egwu Surugedee” against Southeast presidential delegates.

“Unfortunately, Governor Hope Uzodinma who used our women as delegates to collect $10,000 from Chibuike Amaechi, and end up in giving the women N300,000 yet he told the delegates to vote for Ahmed Lawal, this is another height of greed and primitive accumulation of wealth and deliberate betrayal to Ndigbo by Governor Hope Uzodinma and his cohorts.”

The group submitted that Governor Hope Uzodinma has demonstrated his alleged ill character over trust, and shows an inward betrayal attribute that forms his personality.
In his reaction, the chief press secretary to the governor, Ogwuike Nwachuku, stressed that the bribery allegation is the figment of imagination, gross falsehood. He advised the youths to investigate properly before putting up any write up.

“We earnestly pray that God will root them out from Igbo land, as we prepare for new political emancipation from the shackles of political mediocrity and injuries they caused us.

“We shall in due time make public the names of the all delegates saboteurs and other stakeholders saboteurs that betrayed Southeast in the 2022 presidential primary election.

“We are watching closely on those set to betray Ndi Igbo come Presidential election 2023”
The council, therefore, enjoined political stakeholders from the region to solidarise with Mr. Peter Obi, the presidential candidate for Labour Party to ensure his victory in the forthcoming general election.