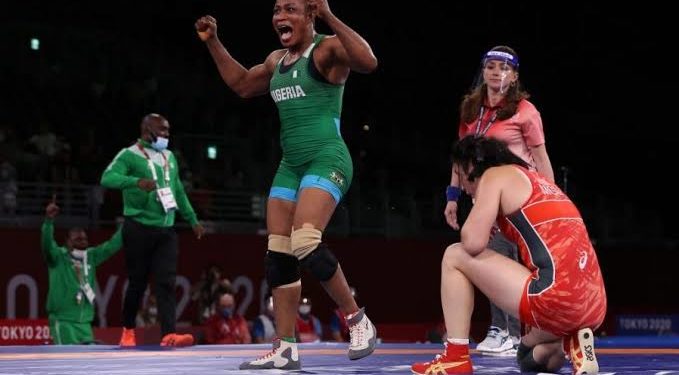 Nigerian wrestler Blessing Oborududu has declared that “the sky’s the limit” after smashing gold medal in the Women’s 68kg Freestyle Wrestling event at the just ended Commonwealth Games in Birmingham, retaining the title she won four years ago in Gold Coast, Australia,

The Olympics silver medalist had an easy ride over Nyeh Ngiri of Cameroon 10-0 in the round of 16 before easily dispatching India’s Kakran Divya in the quarter-final with an 11-0 win.

The 33-year-old also had it smooth against Cocker Lemalie in the semi-final with a 10-0 win and defeated Canada’s Linda Morais in the final to claim her consecutive Commonwealth Games gold medal.

The ten time African champion, who spoke to LEADERSHIP Sports on her arrival at the Nnamdi Azikiwe International Airport, Abuja, from Birmingham, was full of confidence that the sky will be her limit at the 2024 Olympics in Paris, France.

“With this high spirit and good preparation the sky will be the limit in the Paris Olympics,” Oborodudu declared.

“I met the Indians in the quarterfinal-semifinal matches and Canadian in the final, and I was able to conquer them.

“Though the Canadian was a world champion, I was able to have the confidence to wrestle her to win the gold for my country, make myself proud and put a smile on the faces of my well wishers and those that pray for me to excel.

“I dedicate the victory to God Almighty who made it possible for me to attend the Commonwealth Games and I also want to use this medium to appreciate the president of Nigeria wrestling Federation and also my miracle governor, senator Douye Diri, Ministry of Youth and Sports and Nigeria Olympics Committee for been there for me by going to ranking series make me improve to attend more competitions to wrestle.”

She urged the upcoming athletes to remain focused and not to give up.