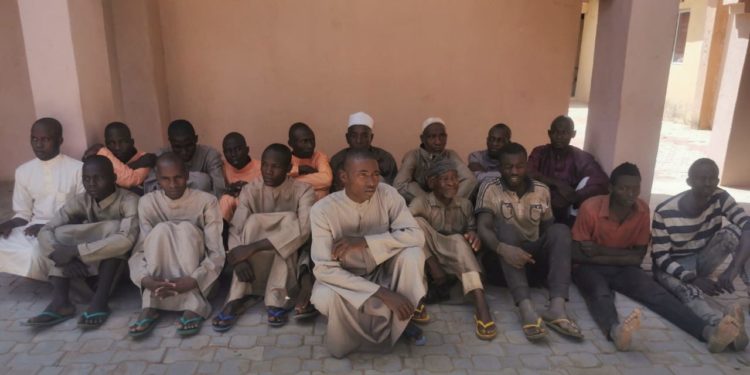 Last year, Mr Oladimeji Josiah, was kidnapped in Kubwa, Abuja, and he was not released until his family paid N2million ransom. What he passed through in the hands of the abductors was terrible. He narrated his experience to the News Agency of Nigeria (NAN).

According to him, they used cloth to cover his eyes after which they tied a tight rope over the cloth. While in captivity, he said, the armed men usually went on operations to kidnap more people.

“We were about 16 abductees in that camp; about 11 people were kidnapped from a settlement along Suleja-Abuja-Kaduna road. “They were about 21 gunmen in that camp with very sophisticated weapons. Whenever they were about going for a raid, they would smoke Indian hemp, shoot severally in the air and be shouting in their native language. “They would tie our hands backward and made us to lie down flat until they return from the operation. Few of their members would man us when others left. “In one of the raids, they arrived at the camp with a man and his son who they kidnapped in Bwari,”. Josiah said the kidnappers subjected their victims to various inhuman treatment. “They beat us with thick sticks on a daily basis. In fact, my neighbour, Somorin, was given the worst treatment because they initially thought he was a soldier. Some of the pictures and videos they found in his phone made them felt he must be a uniformed man.
They showed their hatred for uniformed men and women.”

According to media reports N800 million was paid to the terrorists before seven more victims were released. It was reported that families of each of the six Nigerian victims paid N100 million while the captors pegged the ransom for the Pakistani at N200 million, a sum which was also paid. The terrorists reportedly collected the ransom in naira and US dollars. “Only N200 million was collected in naira, the remaining N600 million was paid in the equivalent of US dollars,” one of the sources had told Daily Trust.
All the families of the victims felt abandoned by the federal government and therefore had to pay for the release of their loved ones. The families also said they sold their property to raise the money. One of the released captors had painted sordid details of their journey to the terrorists’ den and life under the insurgents.

According to the released victim, the attack on the train was a collaborative operation between the Boko Haram elements who held them and some bandits familiar with the train. “They entered into an alliance with the bandits so as to benefit from their numbers and their familiarity with the train. In fact, even the location where we were held in the forests around Birnin Gwari they told us it was not their territory, they got permission from some bandits to keep us there.” He said the location where they were held was an open forest with only three huts within the vicinity. “The men shared two huts while the women and kids used the other one. There were 20 of us in the hut,” he said.
Also, the director of the Universal Basic Education Board (UBEB), Dr Hassan Suleiman, who was among those released from the kidnappers’ den said that he did not pray that his worst enemy should experience what he went through in the hands of the terrorists. Dr Suleiman, while narrating his experience in an audio message circulated on WhatsApp said, he went through the valley of death. He recounted that he was on board the ill-fated train from Abuja to Kaduna to attend an agricultural education programme organised by the FCT UBEB, saying many were killed during the attack.
In the new video that the terrorists released, they were seen flogging the kidnap victims mercilessly who were wailing helplessly. After watching the video, I was very sad for the victim’s harrowing experience.
One must wonder what gives the terrorists so much audacity to treat their captors so badly without any fear of the powers of the state.
What do the terrorists really want from Nigeria? When they recently invaded Kuje Prison and freed their colleagues in that prison, many had thought that they would in turn release the abducted train passengers. This has turned out not to be so. In their new video they are still insisting that their demands have not been met. In the video one of the abducted passengers appeared on camera, narrating how they were kidnapped and lamented that the Nigerian government has so far failed to secure their release. The unnamed captive pleaded with foreign governments – the US, UK and France – to help secure their release.
According to him, the gunmen have no intention of keeping them longer than necessary in the forest. Also, a female captive cried and called the Nigerian government ‘wicked.’ In the process, one of the terrorists said the Nigerian government should be blamed for what is happening to the captives because they refused to do the needful. “We know your plan (Nigerian government) is to rescue the captives with force. Know that this is little of what we can do to them (beating the captives) as we said earlier, if you (the government) did not reach our demand, this place will be a slaughterhouse,” the terrorist said.
The man, who appeared to be a leader of the gang, vowed that his group would kidnap top government officials, politicians and senators.
President Muhammadu Buhari, had last June, directed security agencies to explore every means possible to secure the release of the kidnapped passengers. But that directive is yet to yield fruit. Media aide to President Muhammadu Buhari, Garba Shehu had in a statement said that
Buhari had directed increased kinetic and non-kinetic efforts to bring the case to closure and secure the passengers’ release. Alarmingly, in their new video the terrorists were so daring that they threatened the President and Commander-In-Chief of the Federal Republic of Nigeria and the governor of Kaduna State. How long can Nigeria continue to tolerate these terrorists?
If we can go outside Nigeria to bring a terrorist back to the country to account for his alleged crimes, why can’t we do the same for these terrorists terrorizing Nigerians inside the country? As I write this column, relatives of the victims of the Abuja-Kaduna train attack have picketed the headquarters of the Ministry of Transportation in Abuja.
How long shall we continue on this path? When will the required and available technologies and intelligence be deployed to safeguard citizens while rescuing those already in the hands of kidnappers? Isn’t it time the government came to terms with the fact that citizens remain lame ducks because they are not allowed to bear arms? When citizens bear arms, they will be able to defend themselves in the face of the fact that formal security structures are simply insufficient!
MAY NIGERIA REBOUND!