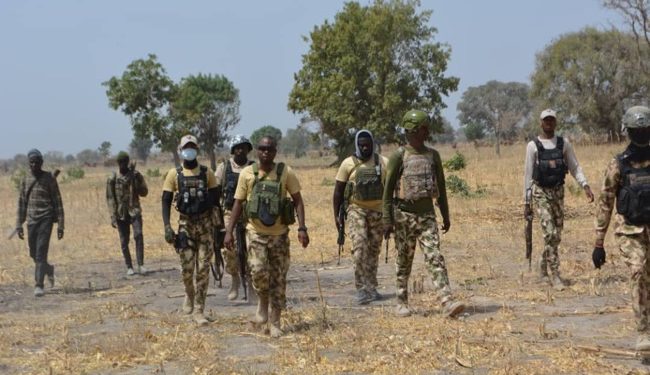 A combined team of military operatives have killed no fewer than 23 bandits , in an early morning invasion of military camp in Sarikin Pawa, Munya local government area of Niger State. It was learnt that the bandits tried to take the soldiers by surprise but they were unfortunate as the soldiers were at alert, and were able to kill some of them.

LEADERSHIP gathered that the bandits attacked the military camp yesterday at about  2:15am, in an attempt to lay ambush for them as they did in Ajata-Aboki last month.

An eye witness account revealed that “they (bandits) invaded the military camp in Sarkin Pawa, the headquarters of Munya local government of Niger State. Unfortunately for the terrorists, the gallant soldiers were on alert even at that late hour of the night.”

The spokesperson of Coalition of Shiroro Associations (COSA) Salis M. Sabo, confirmed that the terrorists came in hundreds to dislodge the military base.

He said, ” The military engaged them in a gun duel which lasted for about two hours until the military called for reinforcement and successfully neutralized them.

“It took the military less than 30 minutes to arrive Sarkin Pawa from Minna in response to the distress call for reinforcement. The energy and passion our security men are exerting recently, in the fight against terrorists in our locality, is unprecedented and has restored hope in the mind of the people.”

On the number of casualties, Sabo said, “By the report at our disposal, there was no casualty recorded on the side of the military but there is strong indication that some terrorists were gunned down, although the number is yet to be ascertained.”

When contacted the state commissioner for internal security, Emmanuel Umar did not respond to his call but a security source confirmed that no fewer than 23 bandits were killed while most of them escaped with bullets wound.

He said the bandits opened fire on sighting the advancing troops, adding that the troops responded with superior fire power and neutralized three bandits while others escaped. The director said the troops searched the hideout and recovered 18 motorcycles used by the bandits to terrorise the general area.

In another development, troops of Operation Hadarin Daji on 17 July 2022 conducted a special operation at Palale-Jaja village in Jibia local government area of Katsina State. The troops engaged and neutralized two terrorists.