by Ray Morphy
in Opinion, Backpage
0 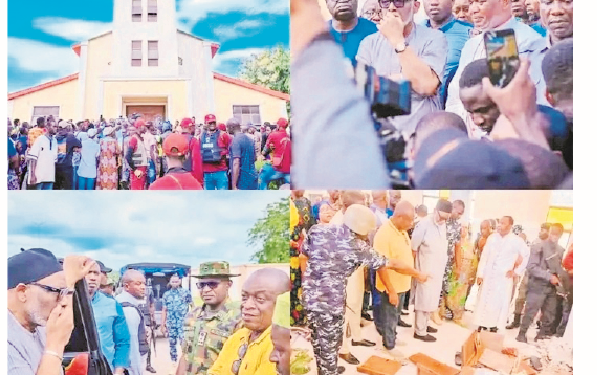 About two weeks ago, the media was awash with the sad news of the bombing and shooting of worshippers at the St Francis Catholic Church, Owa-luwa Street, in Owo town, Owo local government area of Ondo State.

The whole country was shocked by that devasting, gruesome and barbaric attack on a group of people innocently worshipping their God in the South West, a part of the country that had been spared such murderous  attacks, a feature that had become commonplace in many other parts of the country.

No fewer than 40 innocent worshippers lost their lives and many more were injured by the cowardly attack that many hoped and prayed would be the last. No one in his right senses would want to watch the video of that attack again!

The video footage of that attack was horrible to behold. It showed worshippers being killed while blood littered the church, even as some worshippers were seen lying in a pool of their own blood. May we never see that kind of blood spill again in our country. Ondo State governor Arakunrin Oluwarotimi Akeredolu, who visited the scene of the attack, described the incident as “a great massacre” that should not be allowed to happen again. President Muhammadu Buhari condemned the attack, calling it “heinous!” The Vatican said Pope  Francis was praying for the victims who had been “painfully stricken in a moment of celebration”.

The identity and motive of the attackers was not immediately clear, as the perpetrators did not take responsibility. However, the federal government said the attack was likely carried out by a terror group,   Islamic State of West African Province (ISWAP). The Minister of Interior, Rauf Aregbesola, said this while briefing journalists after National Security Council meeting presided by President Muhammadu Buhari.

“The Council is quite concerned about the violent attack in Owo, Ondo State. We have been able to locate the imprints of the perpetrators of that attack and from all indications, we are zeroing in on the Islamic State of West African Province (ISWAP),” Aregbesola said.

However, the governor of Ondo State, Rotimi Akeredolu, has picked holes with the declaration of Islamic State West Africa Province as being responsible for the terrorist attack by the federal government, describing their conclusion as too hasty.

Akeredolu who said he took the conclusion with a pinch of salt, added that ISWAP is known to take responsibility for its attacks and always owned up to any attack perpetrated by its members. Similarly, Governor Kayode Fayemi of Ekiti State described the claims linking the Islamic State West Africa Province or Boko Haram to the attack as mere speculation. Fayemi stressed that no evidence has confirmed that the  terrorists were responsible for the attack.

Amid the controversy over who was responsible for the sad incident, on Friday last week authorities in Ondo State held a mass funeral for victims of the massacre. The attack has raised fears, and rightly too, that the Islamic State West African Province that was blamed for the attack is spreading from the north to other parts of Nigeria. At the venue, hundreds of people gathered to witness the funeral mass, including state and church officials. During the mass, church authorities denounced the attack and said the government must do more to protect citizens. “I call on  President Buhari and our leaders in the federal government or state  government to wake up, sit up and act up to secure lives and properties all over Nigeria,” said Catholic Bishop Emmanuel Badejo, one of the officiating clergymen. “How many more must die? Does life really have any value anymore with you?” Ondo State governor Rotimi Akeredolu promised to improve security. “What has happened to us in Owo is indescribable, I’m short of words,” he said. “We still have over 70 in the hospital, some have been discharged. I’m here before you to accept a failure of security, we have failed to defend these people.”

Nigeria is seeing increasing attacks by armed gangs as the country’s general elections draw closer. Outgoing President Muhammadu Buhari promised to improve security when he was voted in seven years ago and improvement in security has remain a promise, yet to be fulfilled.

What better way to show that nothing was being learned from the Owo Church attack than the sad news that churches was again attacked on Sunday, barely two weeks after the Owo massacre.

According to the media four people was killed while 44 others were abducted by terrorists in an attack on two churches in Rubu community, Kajuru local government area of Kaduna State. The terrorists attacked worshipers at St. Moses Catholic Church and Maranatha Baptist Church in the community during mass at the Catholic Church and service at the Baptist church. Most of those abducted were said to be women and children. Those who sustained injuries were said to have been taken to St. Gerald Catholic Hospital, Kaduna, for treatment.

Has Nigeria returned to the era when people are not safe, even in sacred grounds like Churches and Mosques? Is this a classic case of the more things change the more they remain the same? In April this year, Muslim faithful observing Ramadan fast in Taraba State were thrown into mourning as unknown gunmen killed a monarch in a mosque. The attack took place in Maisamari town of Sardauna local government council in the Mambilla Plateau at about 7:25 pm when the Muslims were observing their Ishaa prayers in the mosque. The incident came barely two weeks after armed bandits launched an attack on a mosque in Bali local government council killing three persons and  leaving others with various degrees of injuries. The name of the deceased district head was given as Alhaji Abdulkadir Maisamari, while several worshippers escaped with various degrees of injuries.

Similarly, in October 26, 2021 gunmen killed 16 worshippers at a mosque in Niger State. According to media reports scores of gunmen on motorcycles stormed Maza-Kuka village in Mashegu district of Niger State and opened fire during morning prayers, said Ahmed Ibrahim  Matane, the secretary to the state government. “The bandits shot dead 16 people inside the mosque while they were praying,” Matane told AFP.

Three worshippers were injured in the attack, one of them critically, he added.

What does this tell us and what message are the perpetrators trying to pass to us? And what are the implications?  The message is loud and clear. It is to tell us we are not safe anywhere in the country, not even in worship centres. It is also a clear indication that our security agencies still have a lot to do because it seems the outlaws are steps ahead of them. This is also a  reminder to Abuja that it has reached the point that it must devolve policing powers to states and local governments as obtainable in other  parts of the world. The security situation is dire. This is a situation that Nigerians cannot leave only for the government and security agents. Security should be everyone’s business. The message everywhere should be, “If you see something, say something.”

Though sad to say, the religious authorities in the interim should take their security into their own hands, since the government seemed overwhelmed. Worship centres should beef up their security by having more security personnel both public and private during worship sessions. They should have security equipment including bomb detectors and CCTV inside and outside the worship centres. That said, we need a  proactive security architecture that should stop the terrorists before they strike. It is the only way to have sustainable peace in the country and Nigerians will go to their worship centres without fear of being killed.