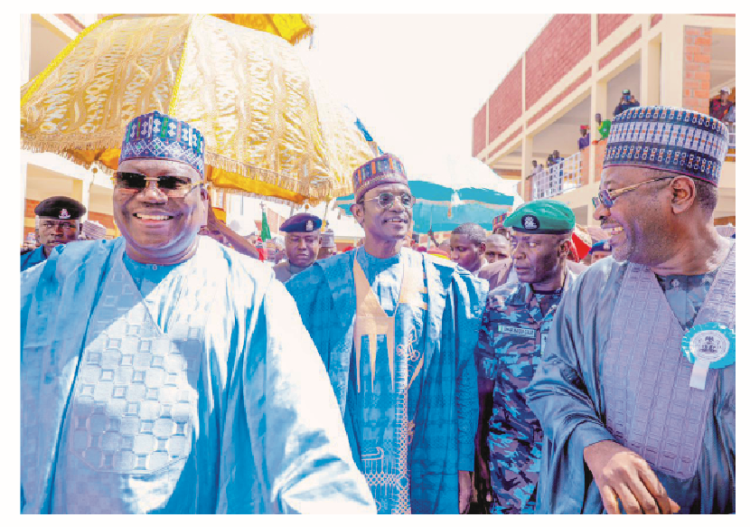 Senate President Ahmed Lawan and Governor Mai Mala Buni during a reception in honour of Lawan in Gashua at the weekend.

The Yobe State government has organised a grand reception for the senate president, Ahmed Ibrahim Lawan, over his doggedness, perseverance and excellent representation of the state throughout his years in the National Assembly since 1999.

Governor Mai Mala Buni while addressing mammoth crowd of well wishers during the grand reception in Gashu’a, the headquarters of Bade local government area said, the state government decided to honour the Senate President based on his selfless service to the nation as well as concern to the plight of the people especially the less privilege.

Buni further said the Yobe State government as well as the entire people of the state are proud of the senate president Lawan’s achievements especially in championing the course of the people through excellent parliamentary representation at all times.

“I am pleasantly delighted with the presence of everyone here today, as you honour our invitation to celebrate a very illustrious son, an excellent ambassador, an uncommon parliamentarian, and a pride of our dear state, the President of the Senate, Ahmad Ibrahim Lawan, CON, the Sardaunan Bade, Akorewolu of iyin-Ekiti, the Ganuwan Kabi, the Mukadam of Nguru and Nwanedinamba 1 of Igbere clan.

“His Excellency, Sen Ahmad Ibrahim Lawan, the President of the Senate, though elected from Yobe state, has become a national figure and this explains why he is honoured with numerous traditional titles from across the country.

“These recognitions by the various groups indeed justify why he should now be honoured at home to appreciate him and his contributions to national unity, the development of his constituency, Yobe state, the North East sub-region, and the nation.

“His Excellency, distinguished Senator Ahmad Ibrahim Lawan, is an apostle of a united Nigeria. His passion for an indivisible Nigeria is uncommon and second to none. Little wonder why he always maintains the slogan ‘Unity,” Buni disclosed.

The governor stated that apart from his role in the establishment of the North East Development Commission, the Senate President has also the approval of the new railway line from PortHarcourt to Maiduguri via Damaturu and Gashua, among other projects in Yobe State.

Lawan while speaking thanked Governor Mai Mala Buni, members of his cabinet, among other personalities for the reception and that “Ypur Excellency I am short of wards for this honour done to me today.”

Ifa Will Determine Next Aseyin Not Money, Priest Insists

Ifa Will Determine Next Aseyin Not Money, Priest Insists