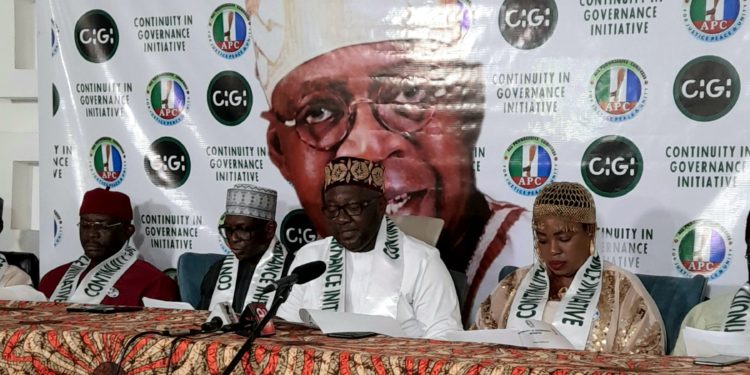 Share on WhatsAppShare on FacebookShare on TwitterTelegram
Ahead of the 2023 presidential election, a socio-political group, Continuity in Governance Initiative (CIGI), has promised to deliver over 50 million votes for the Presidential candidate of the All Progressives Congress (APC), Asiwaju Bola Ahmed Tinubu.
The group said it has constituted structures in all the 774 local government areas of the country in preparation for the elections.
Speaking at a press conference Thursday in Abuja, the Executive Secretary of CIGI, Hon. Nonso Ezedinma, said that Tinubu has the blueprint, business acumen and prerequisite experience to transform Nigeria the way he did as Governor of Lagos State.
He said: “Asiwaju Bola Ahmed Tinubu, as a former governor of Lagos state, has set the template for good governance, which today, has remained a reference point for other states to copy.
“His legacies, as a leading Progressive politician is well known and acknowledged worldwide. He needs little or no introduction, given his credentials as a consummate politician, shrewd business man and a media guru.
“The many legacies of Asiwaju Bola Ahmed Tinubu are spread across nearly all sectors of the nation’s economy, spanning Banking, Oil &Gas, Real Estate, Media Management, ICT, Sports, etc, and has left indelible marks in the sands of time.
“His foray into politics began after he left a very lucrative job with the oil sector, to become a distinguished Senator of the Federal Republic. As a Senator, Asiwaju showed his brilliance in politics, and quickly became a rallying point for his colleagues.
“It was to his credit that the General lbrahim Babangida’s administration succumbed to pressure to hand over power, after the annulment of the June 12, 1993, election won by Chief MKO Abiola of blessed memory.
Ezedinma futher said that the Jagaban story in the struggle for the actualisation of that truncated mandate, has been well documented to warrant a recap.
“However, there’s a consensus, that what Lagos state has become today, as a mega city, was the result of the good governance template set by His Excellency, Asiwaju, when he was the governor of Lagos state for two terms, between 1999 -2007.
“The Jagaban school of progressive politics has produced the largest number of governors, minister and top-ranking members of the National Assembly, including Senate President, House of Representatives Speaker and even the current Vice President.
“Our area of immediate concern is to solicit your cooperation to highlight the positive accomplishments of Asiwaju in the field of politics, governance and industry, where he has left indelible marks. These are very huge credentials that he would bring to bear as the next president of Nigeria.

JUST-IN: How We Killed Gulak, Suspect Opens Up