In this report, IGHO OYOYO dwells on the need to tackle the recurring flooding in Trademore, a popular estate located in the nation’s capital, as victims recount their ordeal after a devastating flood wreaked havoc on the community. 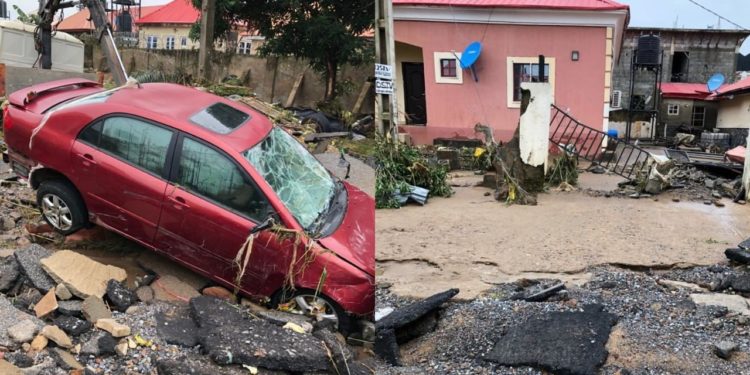 It is no longer news that the perennial flooding in TradeMore Estate has become a major concern to the Federal Capital Territory (FCT) administration, which has over the years tried to find a lasting solution to the flooding situation in the community, because of the devastating effect and damage as a result from the flood whenever it rains heavily.

Flooding in the estate has on different occasions claimed so many innocent lives and destroyed properties worth hundreds of millions, which has become a source of concern to both residents and non-residents of the estate.

It can be recalled that in September 2021, no fewer than four persons were killed as the flood wreaked havoc on the estate, destroying about 166 houses and 26 vehicles.
The residents attributed the flood to the downpour which occurred all through the night on the day of the disaster.

When LEADERSHIP Weekend visited the estate after the heavy downpour last week, some residents who could not hide their fear narrated their experiences in the estate whenever it rains heavily.

A victim who was lucky to have escaped death during the flood, Mr. Solomon Yusuf, told LEADERSHIP Weekend that he was returning from an evening prayer fellowship that night when he drove into the flood, not knowing the gravity of the flood.
Yusuf said when he saw that his vehicle was no longer moving forward and was swerving from left to right. He said he had to halt his trip via the main route and suddenly did a U-turn.

According to him, “Even to get back to the area I entered the flood from was very difficult for me. I was struggling with the wheel amidst the flood, praying that God should help me not to meet any disaster ahead. The fear that took over me gave me the strength to be more focused while struggling to drive out of the flood.

“God heard my prayers and suddenly I felt my car tyres in a better place without much strength from the water. But I did not dare to leave my car, because from where I was, I saw the force that the flood was moving properties of all sorts. However, I keep praying that it should not get to where I parked.

Also, a resident, Mr. Festus Muyiwa who said that the horror of the last year’s floods still hunts his memory said he witnessed how some cars were swept away by the flood, blaming the perennial flooding in the estate on the promoters of another estate in the area who channeled water towards their area.

“I can still vividly remember the flood that claimed those lives last year. It all started after the rain that fell heavily throughout the night before the next day which was Sunday. Before we knew what was happening, houses were flooded and vehicles were carried away by the flood.

“I have never witnessed such a thing before in my life. One of the innocent victims was a man who came to the estate to buy drugs from the pharmacy, when it started raining, he decided to stay inside his car for the rain to subside. The car later got submerged and he died.
“Three bodies were later evacuated on Monday after the rain. I was able to count 11 cars that were swept away; many houses were not spared. I cannot put figures to this.

“All I was able to do then, was try to salvage my belongings. I can boldly say that the annual flooding in this estate is caused by some estate promoters who channeled their water towards the affected side of the estate. If something is not done quickly to address this, what has happened could be just a tip of the iceberg,” he said.

Corroborating Muyiwa’s statement, another resident of the estate, Mrs. Agnes Okechukwu appealed to the FCT minister to take proactive measures to put an end to the annual flooding in the estate, saying that despite all the houses that were demolished by the FCTA, the flooding remains the same, that lives and property are still threatened by the flood.

“We do not know what the government can do to put an end to the flood situation in this estate. Even though the flood does not get to our side of the estate, we still live in fear whenever there is a heavy downpour, because we know that the flood can change direction at any time.

“Whenever it rains heavily, we use to feel the frightening gravity during the movement of the flood, it is always as if a big river is flowing. It is very scary. The government should please come to our rescue and think of the best possible way to control these disastrous floods in this estate before they expand more than the way it is presently.

The negative development in the estate made the FCT minister Mohammed Bello to approve the demolition of 23 houses that were marked for demolition at the estate.
The director-general of FEMA, Abbas Idriss, announced the minister’s approval after a meeting with the association of residents of the estate, Abuja Metropolitan Management Council, and the Department of Development Control.

The acting director, Forecasting Response and Mitigation, (FRM) Department of FEMA, Florence Wenegieme, who represented Idriss in the meeting, informed the residents that the affected properties were built on waterways thereby narrowing the water channels.

He blamed the perennial flooding at Trademore Estate on human-induced activities, explaining that the developer had allocated plots of land on waterways with development presently ongoing.

He explained that the 2022 annual flood outlook placed Abuja Municipal Area Council (AMAC) and Gwagwalada area council on high probable flood risk and that Trade More Estate was on a low plain and advised residents to relocate to safer grounds.

The director-general further added that FEMA has stationed its rescue teams and local divers in flood-prone areas of the territory, barricaded vulnerable roads and mounted early warning signs.

He stated that FEMA would continue to carry out sensitisation across all the area councils using town criers, as well as broadcast media and social media handles.

Following the approval of the FCT minister to demolish affected houses in the estate, the FCTA a month ago demolished over 30 houses affected by the flood plains in the estate.

The demolition exercise was carried out by the FCT minister Taskforce Team led by the senior special assistant on Monitoring, Inspection, and Enforcement to the FCT minister, Comrade Ikharo Attah.

Attah explained that the 30 structures demolished were among the over 100 houses marked for demolition at the estate, lamenting that the estate has always been prone to flooding causing loss of lives and damage to property, especially during the rainy season.

“Some developers are fond of carrying out excessive development on the flood plain in Trademore Estate in violation of building codes and the master plan of the FCT.

“This situation is also very disturbing to the FCT minister, Mohammed Musa Bello, who authorised the demolition exercise.

“All the houses that are going down were marked and some have been marked as long as three years ago. Some were marked at foundation level, window level, and roofing level. The final marking was about four days ago. And we gave them 48 hours plus an extended grace of 24 hours,” Attah said.

He added that the FCTA was still engaging the critical stakeholders at the estate on how they can use the Solution Act to resolve the fate of the 70 marked buildings, reiterating the unwillingness of FCTA to pay compensation, saying there was neither a building plan nor approval nor allocation on the flood plain.

One of the victims of the demolition Ms Sadat Bankole who has been residing in the community for over 10 years, offered support for the demolition if the exercise would save and prevent further loss of lives.

She also called for the prosecution of the developer of Trademore Estate for criminal diversion of water flow and for building houses on the flood plain.

However, despite the demolition of those houses in the estate, the issue of flooding persists in the estate after a heavy downpour last week, which almost wrecked another havoc in the area.

The FCT Emergency Management Agency (FEMA), which went to the estate to assess the affected area, lamented that despite the removal of over 30 structures built on the water channel, the result of the incident was unfortunate and regrettable.

“Right now we are planning a stakeholders meeting involving the FCDA, Department of Development Control, Department of Engineering, and other partners to ensure that more strategies are adopted to mitigate floods in the FCT,” he said.

The FEMA boss further identified narrowing of water channels, excavation, building on waterways, and construction of retention walls, as major issues responsible for flooding in vulnerable parts of the FCT.

Idriss reiterated the commitment of the FCTA to do the needful through the removal of obstructions and the creation of an emergency structural remedy, particularly along the Airport Road.

However, the residents are worried that despite all efforts and promises by the FCTA to put an end to the flooding situation in the area, the flooding continues, thereby appealing that more proactive measures be considered to control the flooding, save lives, and property in the estate.