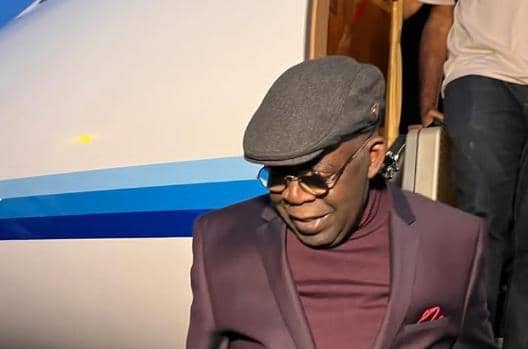 After spending 12 days in the United Kingdom, presidential candidate of the All Progressives Congress (APC), Bola Ahmed Tinubu, yesterday returned to the country, saying the help Nigerians need is back.

His return to the country has put to rest week-long speculations about the state of his health.

Vice presidential candidate of the APC, Sen Kashim Shettima, director general of the party presidential campaign council, and his deputy and former APC national chairman, Comrade Adams Oshiomhole, led some party chieftains to receive the former Lagos governor on arrival at the airport.

In a video shared by the spokesman of the APC presidential campaign council and minister of State for Labour, Festus Keyamo (SAN), Tinubu who stepped out of the plane that brought him back to the country, was greeted with cheers of ‘Jagaban’ and ‘Asiwaju’.

Speaking shortly after his arrival in the country, Tinubu asked Nigerians to shun negative thinking, assuring them that the help they need is here.

“And we owe every effort to the country of patriotism, dedication, capacity and ability to do the job; not negative thinking; not the fact that Nigeria has failed. If it is building, we are builders, if it is construction we are constructors, and if it is assurance, we give to Nigerians that definitely we will make a better country out of it all.”

Hinting about his arrival, presidential spokesperson, Bashir Ahmad, had earlier took to his twitter handle, saying, “After days of intensive political consultations and meetings in London, our presidential candidate, Asiwaju Bola Tinubu is expected back in Abuja, later today,”

Announcing his arrival, Keyamo who had on Wednesday said he had no information about the present location of the presidential candidate also tweeted: “He teased them; he played mind games with them; their thoughts went wild but @officialABAT is the master of the game. Just when they thought they had something on which to feast, he’s rather the one now feasting on their naivety. Welcome back, the City Boy.”

Tinubu’s London trip had sparked speculations that he may be having a severe health condition, especially when he was conspicuously absent at the signing of the Peace Accord by all the presidential candidates and their political parties.

But last Sunday, he took to the social media to certify himself medically fit,

In a short video he posted, Tinubu was seen riding a bike at a gym, saying contrary to rumours that he is down in health, he was strong, hale and hearty.

In the video which he posted on his verified Twitter handle, Tinubu also left a short message, saying, “Many have said I have died; others claim I have withdrawn from the presidential campaign. Well… Nope.

“This is the reality: I am strong, I am healthy and I am READY to serve Nigerians from Day One,” he further tweeted.

Also rattled by reports of his alleged medical condition, the APC campaign team had dispelled the rumour, noting that Tinubu was healthy.

Reacting to social media photos suggesting that Tinubu was indisposed in that country, the director, Media and Publicity, of the APC presidential campaign council, Bayo Onanuga, stated on his Facebook page: “Look at the frame of his glasses. It is certainly not Tinubu’s trademark frame. Let me assure Nigerians who genuinely want to know Tinubu’s whereabouts. He is in London, in his house.

“Tinubu left Nigeria on Saturday night for a short break and in readiness for what will certainly be a grueling campaign.

“I saw him and spoke with him two hours before he left. He was hale and hearty. He was not ill. He didn’t go to treat any ailment.”