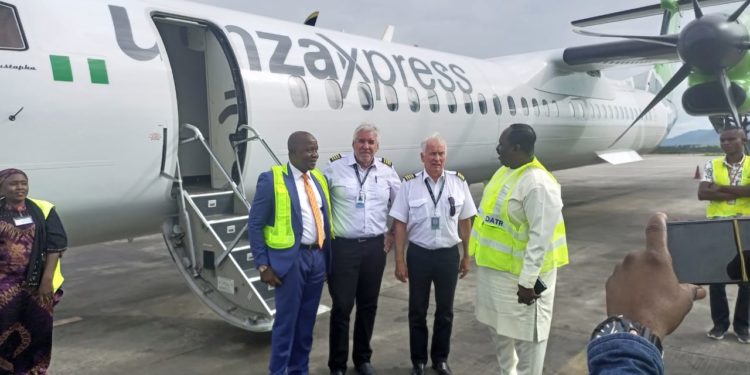 Hope may have come the way of Aero Contractors Airline as it has brought in five new aircraft to boost it operations after suspending all operations since July 20, 2022.

The first of the aircraft, a Q400 arrived the Nnamdi Azikiwe International Airport on Thursday at about 4:26pm.

The new aircraft, which were purchased by Hon. Mohammed Abubakar, owner of Umza Farms, were part of the new partnership deal between his company, UmzaExpress and Aero Contractors, which would bring the airline back to operations.

Speaking at the Airport on the reason for venturing into aviation sector, Hon. Abubakar said: “We are diversifying to aviation despite the troubling situation because some people have to take the risk. So, we are taking the risk.

“This is not about benefits but what we can bring to the country. The issue of flight is no more a secret, the difficulties are there and everybody knows what is going on. For you to leave point A to B, sometimes, it takes you throughout the day for you to do that. Some people have to come to the sector to rescue the sector and to at least bring something to the people.”

On the choice of Q400, he said, “it is because of the prevailing time and issue of fuel and the rest, I think it is the best for now because of the fuel efficiency.”

Also speaking, the managing director of Aero Contractors, Captain Abdullahi Mahmud, said: “as you know, we have suspended our scheduled operations, so this is part of our recovery strategies since most of our aircraft are undergoing maintenance and we want to make sure that when we are coming back as we promised, we come back very strong.”

“We are getting prepared to resume operation as soon as possible. I don’t want to give exact date that we are resuming but we are going to resume as soon as possible. So, we are working day in day out because we don’t want to rush coming back. We have taken time, taken a decision and you know when you are pressing a reset button, you want to make sure that you clean up the mess and once you are coming back, you are back well rather than resume in the same situation you were before and you start dragging and people start seeing delays and cancellations. So, we want to make flights safer to make our partners happy.”

Makinde Urges Nigerians To Be Positive For Nigeria’s Potential

We Endorsed APC Guber Candidate Based On Merit – Ohuhu Monarchs