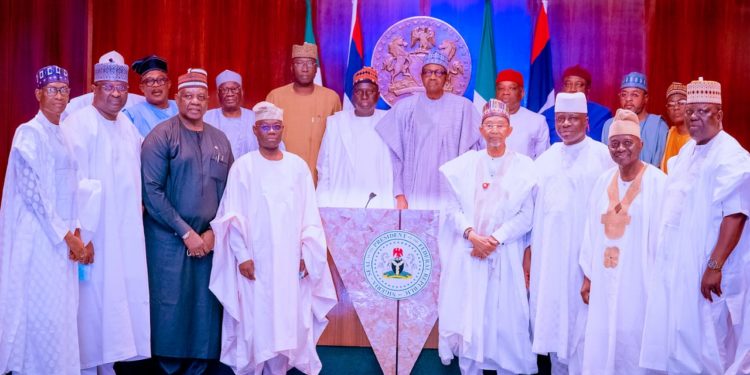 Sequel to the recently concluded party primaries, President Muhammadu Buhari has urged aggrieved members of the ruling All Progressives Congress (APC) to remain committed to its ideals in order to sustain the party beyond its present circumstances.

The president, who said this yesterday in Abuja when he met with some APC senators on the outcome of the party primaries and their implications, said the leadership of party would sustain the healing process that it started to ensure fairness, justice and oneness ahead the 2023 general elections.

LEADERSHIP reports that the meeting stemmed from reports that many aggrieved lawmakers and other party chieftains had left the party and many were on the verge of leaving the party following their failure at the primary elections.

The senators, it was gathered, were angry at the outcome of the primary election in the APC in which they complained they had been unfairly schemed out.

In a statement by presidential spokesman, Femi Adesina, President Buhari noted that complaints were received by some party members, and that machinery had been put in place by the National Working Committee (NWC) to address their various concerns.

“In keeping with our ethos, therefore, I shall continue to address the ensuing challenges and grievances through the party machinery while paying keen attention to the outcomes.

“I must also remind you of the primacy of justice in all our actions. If justice is denied, the outcome is usually unpleasant. This is because you are the members who keep the party running.

“I should add that as part of the policy of using the party machinery for effective resolution of conflict, the chairman and some members of the National Working Committee visited the National Assembly recently to dialogue with our legislators.

“The leadership of the party is currently addressing the outcomes as part of the way forward,” he said.

The president encouraged all the party officials to adhere to the truth and to be fair to all parties in any dispute.

President Buhari told the APC senators that the strength and victory of the party in the election will depend on unity of members and ability to prevent injustice or heal them, perceived or real.

He said, “As the leader of the party, one of my primary roles is to ensure that our culture of internal democracy and dispute resolution is strengthened by creating the opportunity for members to ventilate their opinions, views and grievances at different levels.”

He stated that notwithstanding the fact that Nigeria had accomplished 23 years of uninterrupted democratic governance, the journey is still in a nascent stage and the citizens will continue to learn from their challenges and mistakes.

“Similarly, our party is still evolving in its culture and practices and it is my expectation and hope that we shall attain a mature level in our internal conduct,’’ he said.

The president urged party members to exercise restraint and continue to demonstrate commitment to the party’s ideals, while the leadership continues to build and develop the APC and the country.

“I have noted your grievances particularly as it concerns the just concluded processes, the cost to the nation, the threat to the majority position held by our party in the legislative chambers and likely consequent cost to the electoral fortunes of our party as we approach the general elections. We must not allow these dire threats to come to pass.

“I must acknowledge that in every contest, there must be a level playing ground just as there would be grievances at the end. That is the test of our democratic credentials, systems and practices.  I have since the conclusion of the processes been inundated with various reports and complaints,’’ he said.

The president assured that “justice shall prevail, aggrieved members shall be assuaged and the interest of the party and the nation shall be protected.’’

Buhari thanked the senators for suggesting a meeting on the issues, which include the future of the party and pursuing solutions to the challenges thrown up by the recent election-related activities, particularly the primaries.

In his remarks, leader of the delegation and Chief Whip of the Senate, Sen. Orji Uzor Kalu, said at least 22 senators and other members of the party were unhappy at the outcome of the primaries in their states, noting that they felt disenfranchised by the process.

He said the legislators had made sacrifices for the growth of the party and democracy in the country, asking for the president’s kind intervention.

“Mr President, in the Senate we have worked hard and consistently sold your programmes beyond party lines. Be assured always of our support,’’ he added.

Twenty-two senators of the APC who had earlier threatened to dump the party have reportedly changed their minds.

The senators, after a meeting with President Muhammadu Buhari, assured him that they would not leave the party again.

They were led to meet with President Muhammadu Buhari by Senator Orji Uzor Kalu.

Speaking on the matter after meeting with the president, Kalu said the senators had promised not to dump the ruling APC again.

“Earlier this afternoon, I led the 22 aggrieved senators and members of the All Progressive Congress to President Muhammad Buhari. Our meeting with Mr President was successful and the issue of defecting from our party has been laid to rest,” Senator Kalu said.

President Off To Portugal For UN Ocean Conference

Meanwhile, President Buhari has departed Abuja on a state visit to Portugal at the invitation of President Marcelo Rebelo de Sousa.

The president, who will hold official talks with his Portuguese counterpart, will be conferred with the country’s national Honour and decorated with ‘Great Collar of the Order of Prince Henry.’

According to a statement by presidential spokesman, Garba Shehu, the two presidents are expected to chair an enlarged bilateral meeting and witness the signing of some agreements bordering on issues of mutual concern.

Buhari will also visit the Portuguese Parliament and hold discussions with its president, Dr Augusto Santo Silva, as well as the Prime Minister of Portugal, Antonio Costa.

In the course of the visit, the president is scheduled to address a Forum of Nigerian and Portuguese businessmen and hold separate meetings with select Portuguese chief executive officers and prospective investors to Nigeria.

Buhari will also participate in the United Nations Ocean Conference, which began in Lisbon on Monday, June 27, and runs till July 1.

The conference, co-hosted by the governments of Kenya and Portugal and supported by the UN Department of Economic and Social Affairs (DESA), aims at accelerating the adoption of science-based innovative solutions to challenges facing oceans and the global marine ecosystem.

The Nigerian leader is also expected to engage members of the Nigerian community in Portugal on matters affecting them and developments at home.

The president will be accompanied by minister of foreign affairs, Geoffrey Onyeama; minister of information and culture, Lai Mohammed; minister of industry, trade and investment, Adeniyi Adebayo; minister of youth and sports, Sunday Dare and minister of communication and digital economy, Isa Pantami.

He will return to Abuja on Saturday, July 2.

We Will Still Amend Electoral Act Before 2023 Polls – Lawan

Meanwhile, the Senate president, Ahmad Lawan, has said the National Assembly will try to amend the electoral act to take care of weaknesses identified in the law.

Lawan made this known in a short remark yesterday during plenary following a matter of national importance brought to the floor by Senator Yahaya Abdullahi (APC, Kebbi North).

Lawan, in his remark, described the judgement by the Supreme Court on Section 84(12) of the Electoral Act as a “landmark” judgment that vindicates the National Assembly.

According to him, further amendment of the Act would strengthen it ahead of the 2023 general elections.

He said, “Let me say that this is one major landmark judgement by the Supreme Court, that the National Assembly had done their job and the court upheld it.

“The idea of what method of primaries should be adopted at the moment is entirely left for the political parties to decide.

“But as we implement the electoral act 2022, we are supposed to be very observant of the strengths and weaknesses of the law. This law is supposed to improve the electoral processes and procedures in our country.

“So, it is for us to ensure that where there are weaknesses, we will try to come up with measures, amendments to deal with the issues of weaknesses in the law.

“And, I’m sure it will come full circle when the 2023 elections are held.

“I have no doubt in my mind that all of us in the National Assembly, not only in the Senate, but in the House as well, feel that we must do everything and everything possible to make this electoral act serve the purpose for which it was passed and assented to.”

Rising under Order 42 of the Senate Standing Orders, Senator Yahaya Abdullahi lauded the 9th Assembly for resisting the pressure from the executive to amend section 84(12) of Electoral Act 2022.

He also applauded the Supreme court for the clarity, decisiveness and unanimity of its verdict in upholding the separation of powers principle enshrined in our 1999 constitution.

He said the Supreme Court verdict was a major victory towards true democratic governance anchored on the rule of law.

“In my view, the Supreme Court verdict should be celebrated for the following reasons: It restored and anchors the power of making laws to the National Assembly; and it established a principle that once the president assents to a Bill he/she can’t approbate and reprobate, i.e. he/she cannot go to the courts to amend/reject the Bill in part or in whole”, he said.

Abdullahi, however, underscored the need to amend the Electoral Act to revert to the direct mode of primaries.

“One issue still remains outstanding, and that is amending the Act (after the 2023 elections) to revert to our earlier stance on Direct primaries.

“Our recent nasty experience of the misuse of consensus and delegate system has vindicated our earlier position on the merit of direct primaries provided that verifiable membership registers of political parties are kept simultaneously at the ward level and with INEC, with all the necessary safeguards against corruption and data manipulation, is put in place,” he said.

According to him, as the political process towards 2023 unfolds, the National Assembly will be observant of the loopholes and weaknesses of the 2022 Electoral Act, so that a comprehensive assessment is undertaken to provide adequate grounds for making amendments to the Act before the end of the term of office of the 9th Assembly in May 2023.