An Independent Ukraine Is A Problem For Putin, Says Enifome 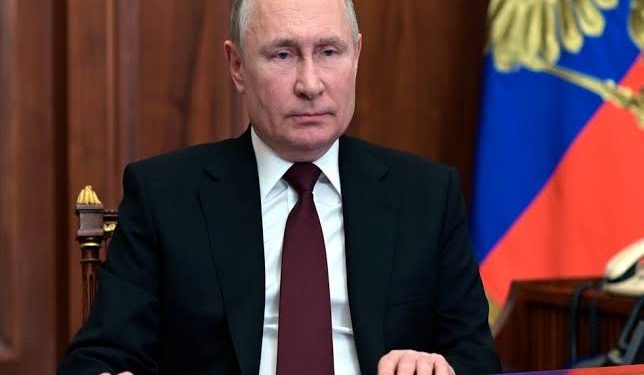 About three months since Russia invaded Ukraine, a public affairs analyst, Emesakoru Enifome, has said that an independent Ukraine was a problem for Russian President, Vladmir Putin.

He said the excuses about the threat from Ukraine joining the North Atlantic Treaty Organisation (NATO), were just a smokescreen.

Enifome, chronicling what led to the dissolution of Soviet Union, said, ”On 12 June, in the conditions of the unprovoked full-scale war of Russia against Ukraine, during which Moscow had already lost 31 thousand military servicemen, the Russians will be celebrating the ‘Day of Russia’. This holiday is celebrated annually, on the date when the Declaration on state sovereignty of the Russian Soviet Socialist Republic was adopted on 12 June 1990.

”On the same date in 1991 Boris Yeltsyn was elected as the president of the Russian Soviet Socialist Republic. Initially, this holiday was celebrated as ‘Russia’s Independence Day’. Since everybody was asking questions from whom the independence was declared, in 1998 the holiday was renamed the ‘Day of Russia’. The Declaration on State Sovereignty of the Russian Federation was the very document, which cased the ‘parade of sovereignties’ of the former Soviet republics.

”That historical moment does not comply with the n’s story of Russia, which restores the Soviet Union, which it had destroyed. The Russian Federation was the first among the ‘Slavic’ republics, which declared independence. After that Ukraine, Georgia, Belarus, Kazakhstan, and other republics of the former Soviet Union, as well as some regions, in particular Chechnya, Tatarstan, Ural People’s Republic, Bashkir Republic, Buryat Republic, and others adopted Declarations on State Sovereignty. However, Moscow did not want to let Chechnya go. The Russian side was alleging genocide of the Russian population in Chechnya and according to its official representatives, it was one of the reasons for the conflict.

“That caused the first Russia and Chechnya war 11.12.1994-31.08.1996, which ended with the victory of Chechen armed forces, withdrawal of the Russian troops from Chechnya, and led to the actual acknowledgment of Chechnya’s independence. On 30 September 1999, in his interview with the Russian newspaper ‘Commersant’ the head of the government of Russia Vladimir Putin said that there would be no new war against Chechnya. In the evening of the same day, the tanks of Russia’s army entered the territory of Chechnya. The second Chechen war, which was officially named counterterrorist operation, lasted over 10 years, ended on 16 April 2009, and claimed over 20 thousand lives of military servicemen and 125 thousand civilians.

“Today the Russian propaganda interprets the events of 1990 as such that Russia allegedly “released” the republics in return for their neutrality and undertaking not to join any military unions. However in reality Putin has always referred to the Soviet Union’s dissolution as the greatest geopolitical catastrophe of the 20th century. In 2015 Putin said that pursuant to the Soviet Union collapse, the Russian people are “the most divided people in the world”. In December 2021, three months before the beginning of the second wave of Russia’s war against Ukraine, in film “Russia. The newest history”, Putin said that for him the collapse of the USSR became tragedy and collapse of historical Russia”.Putin’s quote, “

He said after the start of a full-scale war by Russia against Ukraine, Finland and Sweden decided to join NATO but Putin did not see anything terrible for Russia in the NATO expansion.

“The independent Ukraine is a problem for Putin. The allegations about the threat from NATO are just a smoke screen. After the start of a full-scale war of Russia against Ukraine, Finland and Sweden decided to join NATO, and Putin did not see anything terrible for Russia in this NATO expansion. Ukraine’s rapprochement with the European Union, which became reality at the end of 2013, threatened Putin’s plans.

“Hence, the “special operation” initiated on 24 February 2022, intended to replace the authority in Kyiv after the pattern of Prague and Budapest and to start preparation of the new union sometime in the fall of 2022. In October this year Putin will be 70. He would be really glad to make himself a present in the form of the new Soviet Union.

“You can imagine how triumphing for him would be the completion of Putin’s era (and this is sure to happen)?! For Putin that would: remedy “the biggest mistake” of the USSR collapse; avenge for the defeat in the Cold War against the West; revenge for the unification of Germany; revenge the for “humiliation” of Russia “by ignoring” the Moscow’s protests against expansion of NATO and the EU. It is clear for all that Putin loves symbols, and the new USSR 2.0 should become his personal symbol, no matter how ridiculous this idea is,” he added.

Osinbajo To Supporters: Our Movement For A New Nigeria Must Remain Strong, Firm