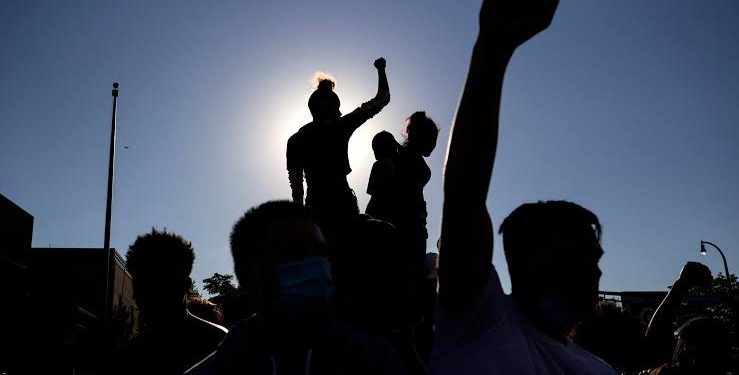 Human and vehicular traffics were held up for several hours along the Udo Udoma stretch of the major access road to the INEC office.

The group under the aegis of the Coalition of Political Parties in Akwa Ibom State (CPPAIS), expressed dismay at Igini over his alleged interference and taking side by supporting one political party against others, saying “such bias stance by an electoral umpire, who is supposed to be neutral is totally unacceptable”.

The protesters numbering over 1000 pointed out that that “Igini has deviated from an unbias umpire to a partisan politician and the effect is in the controversy rocking particularly the All Progressives Congress (APC) in the state”.

The protesters who chanted “Mike Igini must go” slogan, were armed with placards of various inscriptions:

“Igini is biased”; “Democracy is not for sale”; “INEC must act now”; “Akwa Ibom REC has compromised; “Igini don’t kill Akwa Ibom political parties”; “Igini is partisan” and “Igini is a factional Chairman of a party.”

Speaking with LEADERSHIP, the leader of the Coalition, Comrade Ubok-Obong Umoh, said the “personal vendetta of Igini against the main opposition party in the state should be probed”

“This protest is carried by all the youths in opposition political parties in Akwa Ibom State and APC is all prominent here because it is the main opposition party in the state,

“We are protesting clear partisanship demonstrated by a supposed umpire, the Resident Electoral Commissioner, Mike Igini, who has since 2019, demonstrated his partisan interest for one political party,” he said.