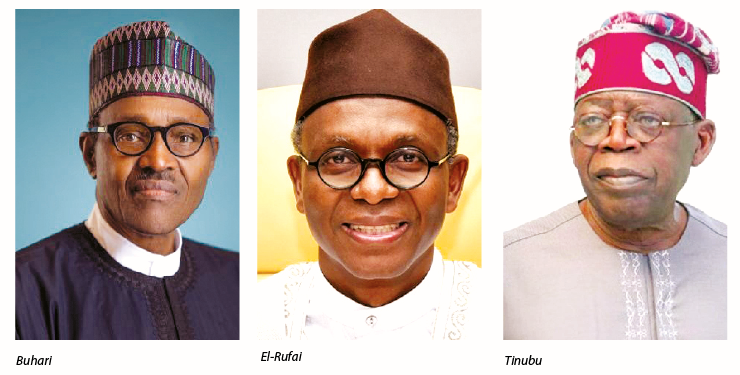 He also lashed back at those kicking against a Muslim running mate for Tinubu, describing them as irresponsible people.

Tinubu had polled 1,271 votes to defeat 13 other presidential aspirants at a keenly contested primary which was concluded on Wednesday.

Revealing some of the factors that led to Tinubu’s emergence as the party’s presidential candidate, El-Rufai said governors of the North West geopolitical zone met before the primary and decided to support the most sellable aspirant knowing the North East would follow.

El-Rufai who spoke on Channels TV last night said he repeatedly asked President Muhammadu Buhari to name his preferred candidate among the five that were presented to him by state governors but the president insisted on letting delegates decide.

The Kaduna governor also explained why northern APC governors insisted on power shift to the southern part of the country.

El-Rufai said his colleagues took the decision based on the principle that power should return to the South after the Buhari administration.

He stated: “It was based on principle and after eight years of President Muhammadu Buhari. It is only fair for the APC to zone it to the South. There is no written agreement but there was an understanding during the formation of the APC. Some of us were therefore terrified when some unserious contenders wanted to contest.”

Confirming a plot by some northern stakeholders to retain power in the region following the emergence of Atiku Abubakar as the Peoples Democratic Party (PDP) presidential candidate, El-Rufai noted that the plot failed because the governors resolved to adhere to the party’s motto of fairness.

He continued: “When we saw moves by some governors and the Senate president, we got worried because we had a principle based on the party’s motto of fairness. As a region, we must adhere to our words and we had to come out unanimously which the President supported.

“Right from the outset, Yahaya Bello made it clear he wanted to run but we didn’t take it seriously.

“The fact that the PDP picked a northerner should not change our stance on fairness. I was told to pick the form but declined in the spirit of fairness. How I wished the PDP zoned to the South also.

“We had to meet the president after reports about Lawan’s candidacy emanated. We told President Buhari that we will support anyone insofar they are from the South which he considered regarding a five-name list. He checked the names and he ratified them ahead of the primaries.”

On the protest against Muslim/Muslim ticket, the governor dismissed suggestions that he was in the race to become running mate to the former governor of Lagos State as mere speculations.

Instead, he said what Tinubu needed at the moment was the space to pick a vice presidential candidate.

Asked if it was appropriate for the APC to go into the election with a Muslim- Muslim ticket, he said irresponsible people were trying to inject religion into politics and governance.

He noted: “You are asking the wrong question because I don’t look at people from the lense of Muslim-Muslim or Christian-Christian. I don’t think the business of governance has to do with religion. I think we should look for the best person for the job.

“I am the wrong person to ask because in my state, I picked a very competent, qualified woman as my running mate in the 2019 election. Just because she happens to be a Muslim, people are calling it Muslim-Muslim ticket. And they said we were going to lose. We did it and we won overwhelmingly.”

El-Rufai said the fixation of Nigerians with religion instead of competence and capacity is sad and pathetic.

He stated: “The way the media and irresponsible people are trying to inject religion into politics and governance is sad and pathetic. It will not take Nigeria anywhere.

“Nigeria is at a crossroads. We face very serious dangers in security, economic meltdown and all people are concerned with as far as who will be president, vice president is religion. It is not religion that will solve our problems. It is the people who are competent and capable that will address Nigeria’s problem, unite this country and put it on a progressive path.”

But the Christian Association of Nigeria yesterday rejected Muslim-Muslim presidential tickets by the APC and other major political parties in the country, saying it would be a threat to the fragile peace and unity of Nigeria.

In a statement issued by its national secretary, Joseph Bade Daramola, CAN noted that with the country’s challenges  and its trajectory, it is imperative for the nation’s political parties not to further polarise the country by settling for Christian-Christian or Muslim-Muslim presidential tickets, warning that the outcome would be worse.

“We congratulate the Presidential Candidates of the ruling All Progressives Congress (APC), the opposition People’s Democratic Party, the Labour Party: Asiwaju Bola Ahmed Tinubu, Alhaji Atiku Abubakar and Mr. Peter Obi respectively, including other parties that are participating in the forthcoming Presidential election.

“CAN urges that a balance of both religious practitioners be considered in the choice of running mates of the presidential candidates. We do not subscribe to Christian/Christian ticket or Muslim/Muslim ticket. Politicians can talk politics but we have stated our view long before now.

“Any party that tries same religion ticket will fail. This is not 1993. Even when we have joint Muslim/Christian ticket, the church still goes through hell. Only God knows the number of Christians that have been killed in the last seven years with no one apprehended or prosecuted.

“Imagine how bad it will be if we have two Muslims in power? The extant Nigerian Constitution promotes religious balance. So, if any political party wants to try a Muslim/Muslim ticket, it’s at its own peril. CAN is only forewarning but will make a categorical statement in the event our warning is not heeded.

“Anything contrary to the above means that the leadership of these political parties do not bother about the unity of this entity called Nigeria.

“There is no party that has no great, good and patriotic Christians who can preside over the affairs of this nation not to talk of being the Vice President as some mischievous people are trying to say. If merit and competence are used as yardsticks, we have many qualified Christians in all the 774 Local Government Areas of this country.

“In the ongoing dispensation, CAN leadership cried in vain to ask President Muhammadu Buhari to break the monopoly or dominance of the security architecture with people of the same faith. We are all seeing the outcome now. It is obvious that the Nigeria of today is different from that of 1993. Our politicians should stop flouting the Constitution by respecting the North and South dichotomy and religious factors.

“To those arguing that people do not care about the religions of their leaders once they are competent and credible, we dare APC to pick its presidential running mate from the South and PDP pick its own from the North and see what follows.

“When the late sage, Papa Obafemi Awolowo picked Chief Mrs Oyibo Odinamadu, a fellow Christian and Southerner, as his running mate in 1979, we all know the consequences of his performance in the North. Our politicians should be doing what will unite us instead of what will further polarise the country.”

Meanwhile, the APC presidential candidate, Bola Tinubu, yesterday continued his process of reconciliation with presidential aspirants who slugged it out with him at the just concluded presidential primary of the party.

Bello was one of the contestants defeated by Tinubu in the contest to clinch the APC’s presidential ticket.

He met with President Muhammadu Buhari before proceeding to Osinbajo’s Aguda House residence in Aso Villa.

Yesterday, the former governor of Lagos State visited Governor Bello, asking him to support his campaign to improve the lives of Nigerians.

Speaking during the visit, Tinubu stressed the need for unity to provide a better, prosperous future for Nigerians.

He said, “To all of you, I say thank you; you’ve done a good job. If the mood reflects the day, I will spend the night here. I say thank you very much for donating a befitting office for us to continue to struggle,” he said.

“We will use our intellectual inquisitiveness, build a nation of sound minds, sound people, elevate our people, and extract them from poverty.

“There is no reason to be in abject poverty in this country. We are brilliant people. Let us wear the uniform of can-do; the mind of those people who have built other nations, particularly people from this age.

“You are the owners of today, tomorrow and thereafter. It will be your grandchildren that will drive the nation after you have gone. The prayer is that we will leave a united, prosperous nation for you.”

On his part, Governor Bello donated his campaign office to Tinubu’s presidential campaign.

In response, Tinubu thanked the governor for the gesture, even as he promised to work for the party and country’s unity.

Details of the meeting with Amaechi were still sketchy at the time of filing this report.