APC Ticket: We Lost The Battle, Not The War – Vice President 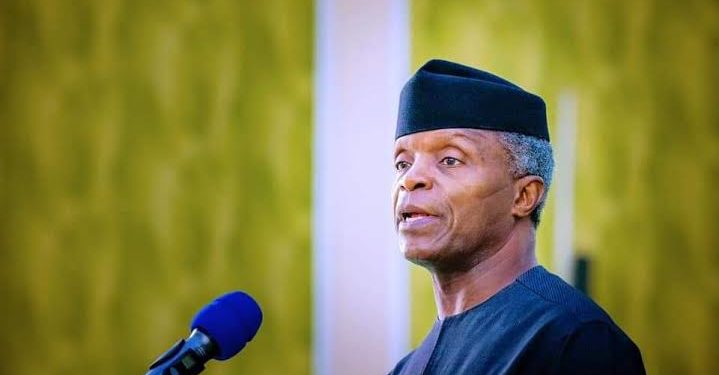 Despite the outcome of the results of the presidential primary of the All Progressives Congress (APC), Vice President Yemi Osinbajo has said he only lost the battle and not the war.

Osinbajo, who spoke yesterday in Abuja at the campaign office of The Progressive Project (TPP), a coalition of support groups that backed him for the presidency, noted that he remains committed to the dream of a new Nigeria.

A statement by his spokesman, Laolu Akande, quoted the vice president as also stating that he would support the PC presidential flag bearer, Asiwaju Bola Ahmed Tinubu.

The VP who was received by a large crowd at the TPP office in Abuja described the clamour for a new Nigeria as a movement.

He said, “This movement is a movement within a party also, we are not doing something that has not been heard of before. What is new is that we have a firm belief that a new Nigeria is possible and it is possible through us who are here.

According to the vice president, despite the result of the APC presidential primary, “the dream of a new country remains alive and well.

“We will have at the back of our minds, that what you have started in the various movements, coming into one, is the seed that will birth a new nation. You and I know the time has come and we will devote everything to it.

“A new Nigeria has only just started, and everywhere across this land, it will be clear to all that a new Nigeria has been born. Once the genie comes out of the bottle, you cannot put it back. The word has been spoken; it cannot be taken back: it is time for a New Nigeria,” Osinbajo added.

Pledging support for the APC presidential candidate for the 2023 elections, Osinbajo recalled the personal letter he wrote to Tinubu yesterday congratulating him on his victory at the party primary.

“In that letter, I said to him that the dream of this country, the dream of a new country, remains alive and well. And I want you to know in your hearts that we are democrats when we participate in a contest and the results are announced.

Thanking Nigerians at home and abroad, including the Osinbajo support groups, for the overwhelming support for his presidential bid, the VP noted: “When we started this race, I never believed that we would have so many young men and women who would believe so passionately in the cause of a new Nigeria.”

Meanwhile, Mrs Dolapo Osinbajo has consoled her husband, Vice President Yemi Osinbajo, after he failed to win the presidential ticket of the APC at Eagle Square, Abuja, on Wednesday.

The vice president lost the APC presidential ticket to his benefactor and former governor of Lagos, Bola Tinubu.

Some 26,000 people liked the post with 3,000 others making comments of encouragement, including Segun Awolowo who responded with the #so proud.

Commenting, Oseunayo wrote: “We’re so proud of him. He did not win the primaries, but he did not lose his honour and integrity. I salute his steadfastness. God bless him forever.”

Osinbajo has since congratulated Tinubu on his victory saying “for many decades, our flagbearer has shown passion, patriotism, courage and determination in the cause of nation-building.

“His sterling contributions to our democracy and its progress stand him out. His wealth of experience will certainly be critical in our party’s continued efforts to attain a more secure and prosperous Nigeria.

“To all members of our great party, regardless of who you voted for at the primaries, we must now unite behind our presidential candidate and flagbearer to ensure victory for our party in the 2023 elections,” the VP stated.

Meanwhile, the presidential candidate of the People’s Democratic Party (PDP), Atiku Abubakar, on Thursday hosted the forum of former governors of the party at his residence in Abuja.

The former vice president, in a post on his Instagram page late on Friday, described the meeting as pleasant and refreshing.

He said, “Steadily, the PDP is gearing for a phenomenal campaign ahead of the 2023 general election with a united front. The responses from all the stakeholders that I have met with reinforce the belief that as one, we can get it done.”

No official statement was however made on the focus and outcome of the meeting. The media was also not invited.

Reactions to his post were however mixed. While most were encouraging messages, at least one asked him to pick his running mate from the South East, and a few asked him to step down for Peter Obi, candidate of the Labour Party.