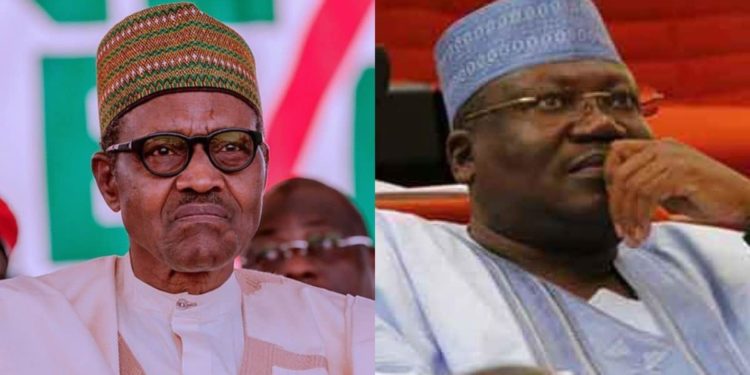 The leadership of the Senate and the service chiefs are working hard to prevent the impeachment of president Muhammadu Buhari.

This is coming just as the six weeks impeachment notice to Buhari has entered the second week with signatures currently being collated.

But worried by the threat from the members of the National Assembly who are desirous of impeaching Buhari, the leaders of the Senate who are likely to be casualties of the pending impeachment, held a crucial meeting with the military chiefs and heads of security and intelligence agencies over the deteriorating security situation in the country.

The President of the Senate, Ahmad Lawan, led other principal officers of the Senate and Chairmen of security related committees to tmeet. Service Chief.

The Senate leadership want the security agencies to tackle insecurity challenges within a short possible time because of the impeachment threat.

The National Security Adviser, Major General Babagana Monguno(rtd) was represented because he was attending the Federal Executive Council(FEC) meeting at the time.
LEADERSHIP reports that despite prompt appropriation to the security agencies to executive the war against insecurity, Nigerians are not sleeping with their eyes close while the country has become a nightmare for travellers.
Despite frequent meetings with president Muhammadu Buhari and the national assembly members in the past seven years, the security challenges in the country keep increasing, a worrisome situation which pushed the angry lawmakers to serve an impeachment notice on Buhari.
Lawan, who also acknowledged the fact that the country is in trouble times, said: “We have invited you today for what is obvious, what is before everyone, what is of concern and of interest to every Nigerian today.
“The Senate, before we went on recess last week Wednesday, we had discussions over the security situation in the country.
“But even before then, we have had several discussions over the security situation.
“Let me say, this Senate particularly and indeed even the previous sessions of the National Assembly generally, have shown serious commitment and partnership with the executive arm of government.
“As far as I can remember, there has never been an administration in this country, especially since the Fourth Republic started in 1999, that invested so much resources in the security of this country like this present administration.
“I have no doubt about it. I am a participant. To a very large extent I can say that none. We believe that as a National Assembly, we have always met this Executive at the right position, at the right time, most especially when it concerns investment in the security of life and property in Nigeria.
“We have also, in our individual capacities as committees of the National Assembly and infact as a National Assembly shown concern about the security situation.
“And the security situation of any country cannot be one hundred percent satisfactory but of course there is a level at which no country can be comfortable with insecurity.
“Ours has lingered definitely. We had hoped that by this time, the security situation in Nigeria would have been far better and Nigeria would have made more progress not only in the area of security but also in the area of economy which is tied to the security situation again.
“I believe that all security agencies and armed forces have been doing their best but apparently we have to do more to achieve what we desire to achieve.
“There are, of course, several arguments whether the resources available to our Armed forces and our security agencies are enough or not. Definitely not enough. I don’t know of any country where there is enough really. But even within the scarcity that we have, this administration and this Senate and National Assembly has always prioritise the security of our country.
“This particular session of the interaction between us is to look into where we are today and probably this current position where we are is most frightening because it is like there is nowhere to hide, nowhere to go. Insecurity is everywhere and especially, if it is coming to the point of dislocating the security situation where the government is quartered. We will really review and see what more we have to do and how differently we have to do.
“Our population is largely peasant. Most of our people are in the rural areas and they live their lives by going to farms. We all know this. In many parts of the country today, that is an herculean task.
“My belief is that we can do better to secure the rural areas. The so-called ungoverned space. At least for our population who go to farms to earn their living, “ Lawan said.
On the negative effect of insecurity to the country, Lawan said: “Where our agricultural productivity is drastically going down, that will complicate the security situation because the most ordinary Nigerian cares more about what he or she or what the family will eat. And of course, all other things are secondary.
“We have problems with our economy to some extent because of insecurity. No foreign direct investment or not as much as we would ordinarily attract to our country. Our prayer is to start seeing serious, remarkable and dramatic changes from today.
“We hope that our discussions will give us the opportunity to consider other things or other areas or ideas that we didn’t have before,” Lawan added.

But the Chief of Defence Staff, General Lucky Irabor, who thanked the Senate leadership for the invitation, described it as “an in-house discussion based on mutual concern.”

“I believe that the wisdom of the Senate President and Senate leadership to convene this meeting is born out of the fact that issues of national security must be seen from a collective perspective and that whatever the situation is, there is always room for rubbing of minds to make contributions to the effect that we have a more secure environment where every Nigerian will have a sense of security in truth, such that our individual and collective aspirations could be achieved,” General Irabor said.

“The commitment is there. It’s very profound. I believe that as we go into discussions on specifics, it will be clear that no one is leaving any stone unturned in redressing all the imbalances within the security environment.”

Some Senators told LEADERSHIP that they are not backing out from the impeachment notice served on President Muhammadu Buhari if the security situation did not get better within the period stipulated.