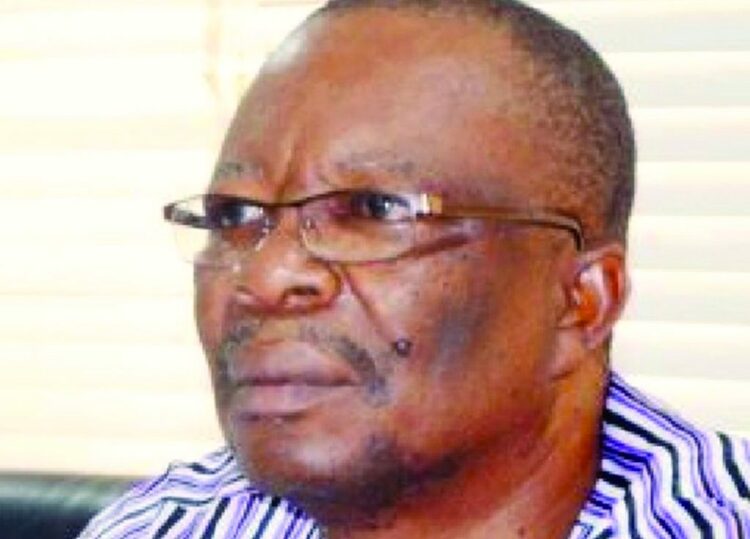 The Academic Staff Union of Universities (ASUU) yesterday took to the streets in some parts of the country in peaceful protests against federal government’s decision to pay them half salaries.

ASUU had a few weeks ago raised the alarm that the federal government turned the university lecturers to casual workers by paying them a half-salary in the month of October.

But in its response, the government said they were being paid in pro-rata for the number of days they (lecturers) worked in October, having suspended its prolonged industrial action on October 14.

The lecturers, however, resolved to protest over the half-salary paid to them by the federal government, declaring lecture-free days in its branches across the country in a bid to draw the attention of Nigerians to the move.

They called on well-meaning Nigerians to prevail on the government to as a matter of urgency and national interest resolve all outstanding issues with the union for the wellbeing of the nation so that the country will take its rightful place in the globe.

They stated clearly that they would continue to defend the University system and the Nigerian State through all legitimate means, adding categorically that they cannot be cowed by tyrants.

Members of ASUU, Bauchi Zone, comprising universities in Bauchi, Gombe, and Plateau States embarked on the peaceful protest in continuation of their demand for better teaching and learning environment across the tertiary institutions in the country.

Addressing journalists after the protest, chairperson of the ASUU chapter, Abubakar Tafawa Balewa University (ATBU), Dr Ibrahim Inuwa, noted that after suspending the eight-month strike due to court order and interventions of well-meaning Nigerians, the government descended so low to withhold salaries of ASUU members, but only paid pro-rata the October salary.

Ibrahim said the union will neither support the introduction of exorbitant fees beyond the reach of the children of the Nigerian downtrodden nor be a party to privatizing Nigerian public universities.

ASUU equally rejected in totally the casualization of Nigerian academics.

It also noted that Nigerian governments are not interested in the development of Nigerian public universities to global university best practice, just as it observed the deliberate underfunding of the universities in the guise of lack of money to introduce exorbitant school fees beyond the reach of the children of the masses, and privatise the universities to themselves.

“The introduction of the Integrated Payroll and Personnel Information System (IPPIS) as a payment platform in the public service and its forceful implementation in federal public universities has robbed the federal universities of their autonomy and academic freedom”, ASUU said.

It stated that the IPPIS regime resulted in haphazard payments of staff salaries, non-payment of promotion arrears, non-implementation of promotion, mutilation of salaries, untimely retirement of staff, and caused the withholding of a lot of university staff salaries, ranging from one, two and in some cases thirteen months respectively.

He regretted however that in the normal antics of the government, the unions’ payment platform is far from seeing the light of the day, even after being subjected to series of tests.

“As a patriotic Union, ASUU has for years been calling on the Government both at State and Federal levels to accord the Nigerian Public Universities a befitting and conducive learning environment that will drive the nations’ wellbeing through inclusivity and global competitiveness. These were conspicuously captured in the FGN/ASUU agreement of 2009,” the lecturers stated..

Inuwa said the union was not surprised that the Nigerian ruling class who are saddled with the responsibility of managing the country and are supposed to be at the forefront of championing the course of partnering with the academia to actualise and sustain the nations’ inclusivity and global competitiveness are the ones deliberately and actively working against these feats.

He further recalled that ASUU had deployed several diplomatic means to persuade the government to address the contentious issues in the public universities but all fell on deaf ears, leaving the union with no choice than to declare a nationwide strike on February 14, 2022 to drive home its demands.

The Union’s chairperson outlined the issues that necessitated the strike to include Earned Academic Allowance (EAA) Funding for revitalization of public Universities Proliferation of Universities, Visitation Panel Renegotiation of the FGN/ASUU Agreement of 2009 Replacement of Integrated Payroll and Personnel Information System (IPPIS) with University Transparency and Accountability Solution (UTAS), as well as Withheld salaries and non-remittance of Check-off Dues.

He described the union’s demands as legitimate and long overdue, saying the Earned Academic Allowance (EAA) are allowances of academic staff earned through excess workloads they’ve done and administrative work assigned to them by their respective universities, and to date the governments are owing the backlog of the EAA.

“In the FGN/ASUU agreement of 2009 which captures conditions of service, funding, university autonomy & academic freedom, and other matters, the government is expected to honour the agreement by providing funds for revitalizing public universities,” he added.

The University of Jos branch of ASUU also called on well-meaning Nigerians and stakeholders in the educational project to as a matter of urgency stand up to defend the future of students by calling on the present government to order.

Noting that the union’s struggle is a patriotic one aimed at repositioning Nigerian universities to compete globally, they condemned the casualization of Nigerian academics through the payment of pro-rata salary as well as withholding their eight months salaries.

ASUU also condemned in strong terms the mischievous IPPIS platform as a means of amputating their hard-earned wages as well as tool for criminal diversion of part of their salaries to private pockets using unverified deductions.

The chairperson of ASUU UNIJOS chapter, Associate Prof Lazarus Maigoro, while addressing journalists lamented that instead of making concerted effort to address the issues as contained in 2009 ASUU-FG agreement, “the Nigerian government through its hatchet man, Dr. Chris Ngege, preferred to ambush ASUU with a vexatious court judgment.”

He added that it has now been clearly demonstrated that the government is the enemy of students , their parents and public universities as a whole.

Meanwhile, ASUU has accused the Minister of Labour and Employment, Dr Chris Ngige, for personally directing stoppage of their salaries in the name of ‘no-work, no-pay’ policy.

The national president of ASUU, Prof Emmanuel Osodeke, who spoke yesterday on Channels Television programme, “Politics Today,” which was monitored by LEADERSHIP, also lamented that the minister has converted the struggle into a personal fight with the Union.

Osodeke said it was sad that Nigeria has such a person (Chris Ngige) as a minister, saying if the government tries to casualise University lecturers, then it will kill the system.

“It is sad that we have such a person as a Minister and the question Nigerians should ask is, can a Minister of Labour direct the Minister of Finance on what to do? .

“We are working under the Ministry of Education and we thought anybody that can give such a directive, who monitors what we do through the NUC is the Minister of Education who is our employer.