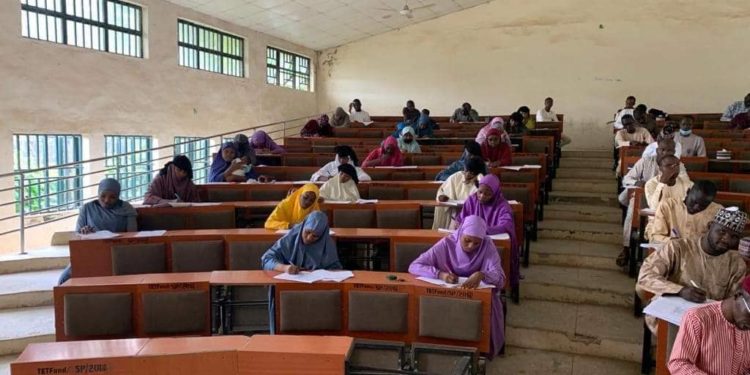 Despite the ongoing strike action by the members of the Academic Staff Union of Universities (ASUU), students of Kaduna State University (KASU), on Monday, commenced their second semester examinations for the 2021/2022 academic year.

Recall that Kaduna State governor, Nasir El-Rufai, had last week during a live media chat on local radio stations in Kaduna, threatened to sack striking lecturers of the Kaduna State-owned University (KASU) and replace them if they don’t resume work.

Our correspondent, who visited the KASU main campus in Kaduna metropolis, saw students sitting in lecture halls writing their examinations and supervised by officials.

A student, who identified himself as Sani Abdullahi, said: “This is our second semester examinations, we suppose to start last week but was shifted to start today Monday because of the three-day public holiday declared by the state government to enable residents obtain their voter cards. The strike affected our lectures. We received few lectures”

Although, efforts to speak with KASU officials by LEADERSHIP met a brickwall as they were not successful.

ASUU had embarked on industrial action to protest poor funding of universities and non-implementation of agreements reached with the federal government since February this year.

LEADERSHIP reports that this Monday, ASUU announced the extension of the strike action by another four weeks.