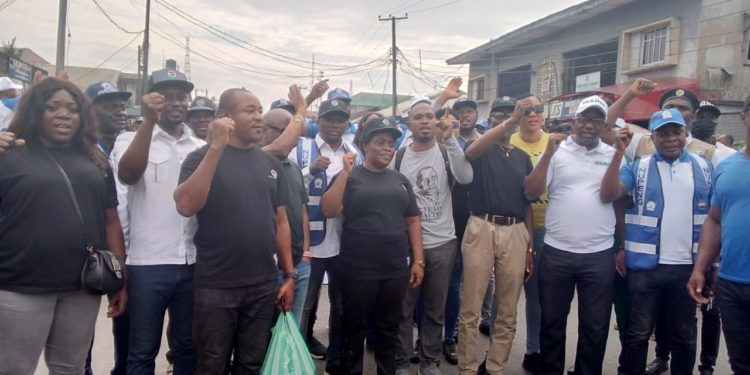 Hundreds of lecturers and students from various tertiary institutions in Rivers State, on Tuesday, joined workers in the state on a protest march to the Government House, Port Harcourt, in solidarity with the striking members of the Academic Staff Union of Universities (ASUU).

LEADERSHIP observed that the protest match, which was organised by the Nigeria Labour Congress (NLC) went on as planned in the state, despite the continued seal-off of the NLC secretariat in the state, as well and the threat by the state government to deal with any civil servant that participate in the nationwide protest.

The protesters, who started gathering along Igboukwu Street in D/Line area of Port Harcourt, close to the sealed NLC secretariat as early as 7:15 am, were also not frightened by the presence of over 100 armed policeman stationed in front of the secretariat.

The protesters, who carried large banners and several placards with different write-ups, marched through some major roads in the state capital, including Ikwerre Road and Azikiwe Road before arriving at Government House, where they delivered a letter to President Muhammadu Buhari, through Governor Nyesom Ezenwo Wike.

Addressing the protesters, NLC chairman in the state, Comrade Beatrice Itubo, said Nigerian workers were concerned over the condition of ASUU members and university students in the country.

Itubo said: “We are concerned; it is our matter. The children that are at home are our children. The lecturers and other principal officers of Nigerian universities are our people. They are all members of the Nigeria Labour Congress and today we have decided to protest peacefully.

“We are angry about how things are going in this country. Inflation is at highest level; everything has gone the other way. No security and now, no education. So, we are saying enough is enough.”

7 Incredible Health Benefits Of Strawberries And Why You Should Eat More... Click Here For Details
Tags: ASUU
SendShareTweetShare
Previous Post

You Can’t Shut Down Nigeria Because Of Banditry, SDP Candidate Tells Buhari