Atiku, Tinubu Wrangle Over Credibility Ahead Of 2023

by George Agba and Chibuzo Ukaibe
in Cover Stories, News
0 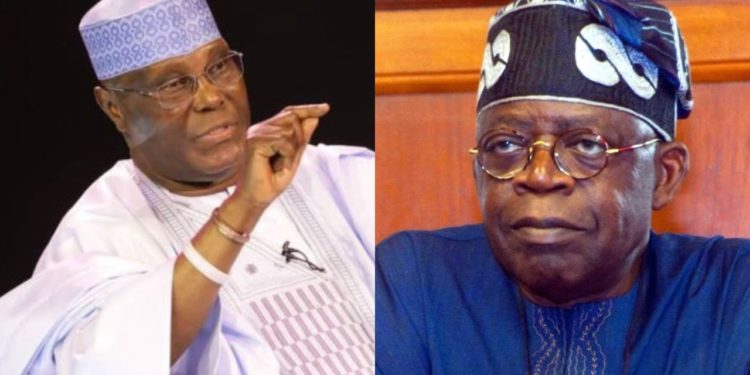 Presidential candidate of the All Progressives Congress (APC), Bola Ahmed Tinubu, and that of the Peoples Democratic Party (PDP), former Vice President, Atiku Abubakar, yesterday engaged in a credibility battle ahead of the 2023 general election.

While the PDP standard bearer said Tinubu betrayed his party in 2007, the APC presidential candidate said Atiku was the real betrayer who shortchanged Nigerians by reneging on the gentleman’s agreement of power rotation between the northern and southern part of the country.

Casting the first stone in the credibility battle was Atiku who accused Tinubu of refusing to support the Action Congress of Nigeria (ACN) in the 2007 presidential election because his demand to run on a Muslim/Muslim ticket was rejected.

The PDP candidate who stated this when he featured on Arise TV programme, The Morning Show, said the Muslim-Muslim presidential ticket caused his “fundamental disagreement” with Tinubu since 2007.

Reacting to Tinubu’s choice of a Muslim running mate, Atiku said yesterday that he severed political ties with the APC presidential candidate over the issue, even though they are still friends.

The PDP candidate said, “My fundamental disagreement and political departure with Asiwaju [Tinubu] since 2007 was due to the Muslim-Muslim ticket. Remember, I opted out of PDP because of zoning, and together with Asiwaju we formed ACN.

“Tinubu wanted to be my running mate when I was given the ACN presidential ticket in 2007, but I disagreed. And because of that, he switched his support to the late Umar Yaradua. That was the parting point.

“The Muslim-Muslim ticket has always been my fundamental disagreement. Nigeria is a multi-ethnic and multi-religious nation, and there should be a religious balance in our leadership. We are still friends, of course. But that doesn’t mean we won’t have political differences. We have been having political differences ever since we became friends; nothing unusual about that.”

On the support of his former boss, former President Olusegun Obasanjo, Atiku said he had been talking with Obasanjo, adding that he was quite sure that the former president has no better candidate to support than him.

“I have been talking to him. The only thing is that I didn’t go after I emerged as the candidate of the PDP. Why will I not need his support? He was my former boss. Of course I will need his support. I assume I have it. I don’t think he has a better person to support than myself because I have his legacy to continue,” he noted.

Atiku further justified his choice of Delta State governor, Ifeanyi Okowa as his running mate for the 2023 presidential election.

He said, “In arriving at the decision, I held wide consultations with various stakeholders in our party including our governors, the national working committee, board of trustees, and other leaders to seek their inputs and their wisdom.

“In these consultations, I made clear that my running mate would have the potential to succeed me at a moment’s notice, that is, a president-in-waiting.
“In other words, the person must have the qualities to be President. The person must have an appreciation of the deep rot which our country has been put into by the rudderless All Progressives Congress government; understands the great suffering that most of our people are going through and the urgency of relieving them of that suffering; understands the critical importance of economic growth and development to provide our young people with jobs, hope, and a pathway to wealth.”
Atiku said he didn’t reject Wike nut only picked who can deliver.
He stated: “Wike is brilliant and tenacious. Going by history, I picked an Igbo as running mate in 2007, in 2019. I still picked an Igbo as running mate for 2023.
“The committee that presented the three nominees was chaired by the Governor of Benue State, Samuel Ortom. They recommended three people, so I picked one. People should be fair to me and state the facts.”
But hitting back at Atiku, Tinubu described the PDP flagbearer as a liar who could not win the 2007 presidential poll because he was a bad product at the time.
Speaking through the director, Media and Communication of the Bola Tinubu Campaign Organisation, Adebayo Onanuga, the APC standard bearer said Atiku cannot be trusted because he brayed Nigerinas on power rotation
Speaking exclusively with LEADERSHIP Weekend last night, Onanuga said, “Check the records whether Atiku didn’t get substantial votes in Lagos. In 2007, people voted massively for Yar’Adua and Buhari in Lagos but Atiku got substantial votes.
“Atiku is a liar and Obasanjo said so. Did he address his own original sins? This man just likes shifting blame without addressing his own problems. His party reached a fundamental understanding between the northern part of Nigeria and the southern part of the country that power should rotate. When it was the time of the South to get power, Atiku and his people said ‘no, power should stay in the North’. Even though Atiku got the ticket in 2019, he failed. He should be focusing on that.
“Our country had political understanding and that is why we are what we are today. The understanding is that power must rotate between North and South, but they are not focusing on that. Rather they are focusing on what should not be. Why are they focusing on what the call faith-based? Bola Tinubu and Shettima’s ticket is not about faith. It is clear; people are not saying this is a ticket of Yoruba or Kanuri. They are not saying it is a ticket of minority Kanuri and Yoruba.”
Defending Tinubu’s choice of Shettima, Onanuga stated: “All of us were born into this world and we accidentally found ourselves with the parents that gave birth to us. If you are coming from almighty God to this world, he didn’t say you are going to be a Christian or Muslim. Did we have any choice? We didn’t. If I should be born in a pagan’s home, I should probably be worshiping my Shango or Ogun. When I was born in a Muslim home, by accident I became a Muslim. Bola Tinubu’s wife is a Christian; his wife is a Christian.
“This man (Tinubu) is not a fundamentalist. Shettima is a Muslim but he is not a fundamentalist. We have said it many times that he is going to be vice president of Nigerians and not a vice president of Muslims. Faith-based issues should be left for the Sultan and the CAN president to address.
“I believe the media should set agenda and take off all this sentiments and concentrate on the substance of governance. They should focus on what the candidates have to govern Nigeria and not their faith. Today we have a Muslim-Christian combination and people are complaining. Why must they be complaining if it is about faith?”
Onanuga further accused Atiku of overrating himself, saying he did same in 2007 but was mercilessly beaten by Yar’Adua at the presidential poll.
He continued: “In 2007 election, Atiku over rated himself, thinking he could defeat the PDP candidate, Yar’Adua. It is the same thing he is doing today; overrating himself by saying ‘I’m going to beat Shettima and Tinubu in the North East. I will win majority of the votes.’ But he is overrating himself. In 2007, even though the election was flawed, he lost Yar’Adua too was a bit not happy the way the election held but he beat Atiku mercilessly.
“Then ACN was not a national force with national spread as PDP. Atiku thought it was name; that he has political structure all over the place and he was going to beat Yar’Adua but he couldn’t beat Yar’Adua and he started blaming it on Bola Tinubu, falsely accusing him of betraying his party. That is a big lie.
“The ACN supported him but he was a bad candidate at that time and that is why he lost the election, just like he is a bad candidate now. He even lost his own home state, Adamawa to Buhari in that election. They were three major candidates in that election but he came third and now he is blaming Bola Tinubu”

Tinubu Has Lost Moral Standing – PDP
Meanwhile, the PDP has said Tinubu has lost the moral ethical standing to contest the 2023 election, following the controversy that trailed the emergence of Bishops at the unveiling of his running mate, Senator Kashim Shettima.
The party said the hiring of street artisans, fraudsters and touts and criminally dressing them in bishop’s vestments to orchestrate an endorsement for its presidential campaign is nauseating, blasphemous and unpardonable.
The PDP national publicity secretary, Hon Debo Ologunagba who stated this during a press conference at the party secretariat, also alleged that Tinubu ran to Abuja at the heat of the Osun State governorship election, with the hope of reversing his party’s defeat.
The controversy over the APC same faith ticket took a new twist with the attendance of some bishops during the unveiling of Shettima as Tinubu’s running mate.
While the Christian Association of Nigeria (CAN) disowned the said bishops as not clerics, Tinubu’s campaign organisation said they were still upcoming.
But Ologunagba said “PDP, in the strongest term, condemns this profane and highly provocative act of desperation by the sinking APC Presidential Candidate, Asiwaju Bola Ahmed Tinubu, in the face of APC’s collapsing leadership, membership and followership structure across the country.
“Nigerians were sickened by videos and pictorial evidence of known mechanics, bus conductors and fraudsters sacrilegiously being dressed in fake bishop vestments and paid to endorse the unveiling of Asiwaju Tinubu’s widely rejected running mate, Sen. Kashim Shettima.
“Such action is unacceptable and unbecoming of any individual aspiring to a leadership position at any level let alone, the office of the President. This is an embarrassment to leadership.
“With this scandalous act, Asiwaju Tinubu, who is still battling with issues of alleged perjury, non-existent certificate and allegations of extortions has become more ethically challenged and lost all moral standing to seek election as the President of the Federal Republic of Nigeria.”

The opposition party spokesman said it was ludicrous that instead of being remorseful and asking for forgiveness, the APC presidential campaign is “shamelessly posting lame denials and excuses in the face of hard and verified evidence of its involvement in the shameless venture.”

He added that PDP is not surprised by the attitude of the APC presidential campaign, adding that it is consistent with the ruling party’s character and DNA.

Unity, Security, Prosperity Of Nigerians Matters To Me Beyond 2023 – Buhari