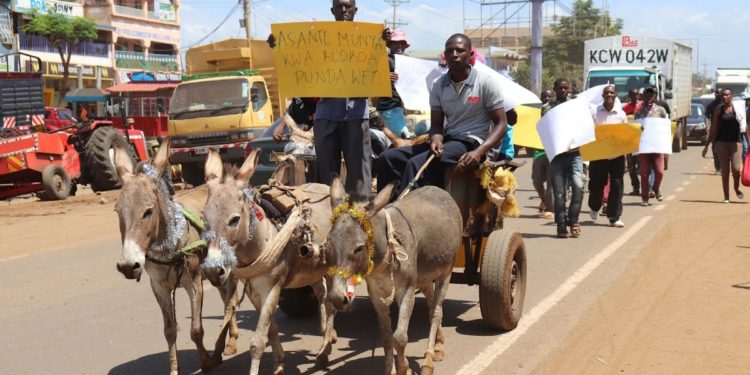 The Donkey Dealers Association (DDA) has said that the proposed ban on donkey slaughtering in Nigeria will result in loss of businesses and investments for over 3 million Nigerians.

The national chairman of the association, Mr Ifeanyi Dike, stated this at a one-day public hearing on eight bills for the agriculture sector held at the National Assembly yesterday.

The public hearing was organised by the Senate Committee on Agriculture and Rural Development chaired by Senator Bima Enagi.
The bill, titled, “Donkey Slaughter Regulation and Export Certification Bill, 2020” was sponsored by Senator Yahaya Abdullahi.
It passed second reading on July 6, 2021 aimed at mitigating the extinction of donkeys given their aesthetic, ecological, educational, historical, recreational and scientific value to the Nigerian nation.
It also sought to declare donkeys as an endangered species which as a result of indiscriminate slaughtering for the purpose of harvesting its skin, has greatly depleted the national herd of the animal.
In his submission, Dike said that the outright ban on slaughtering of donkeys was not a solution to the envisaged extinction of donkeys in Nigeria.
“We should know that the outright blanket ban as proposed by this bill will create some powerful smuggling syndicates who are bent on getting the donkey derivatives for export to China thereby sabotaging the economy.
“The blanket ban on donkey killing and export of its derivatives as a result of morbid fear of its extinction has failed to realise that regulation, ranching and breeding is the solution.
“Cows which we slaughter more than 50,000 on daily basis as meat have not gone into extinction, so how can a donkey with the same gestation period as cow go into extinction. We should encourage breeding and ranching,” he said.
Dike further said that the dealers had invested heavily over the years and have also signed a Memorandum of Understanding (MOU) with National Animal Production Research Institute (NAPRI) for the breeding and production of five million donkeys within a space of 10 years.
“We took this action to increase the local population of donkeys in Nigeria to avoid its extinction,” he added.
He said that donkey regulation, breeding and ranching policy would create millions of job opportunities starting from donkey farmers, traders, slaughter houses, logistics and export.
“Each of these segments is very important in revenue generation into our economy by way of taxation and levy collections right from the local governments to the states and to the federal government.
“It is projected that donkey businesses, if properly regulated, are capable of injecting N10 billion annually to our economy,” he said.
Dike urged the Senate to consider the plight of over three million Nigerians that would be out of jobs and businesses if the bill was allowed to pass.
A legal practitioner and a human rights activist, Mr Maxwell Okpara, said the bill was a calculated attempt to put some Nigerians out of business and from earning a living adding that the business of donkey slaughtering had been in existence for 70 years.
He said the dealers were more worried about the extinction of donkeys, hence had resorted to breeding more donkeys through establishment of ranching systems to keep them in business. Okpara said he was not against having a legal framework to regulate the business of donkey, advised that the act should be framed to protect Nigerians in the business of donkey value chain.
A member of the House of Representatives, Muhammad Datti in his remarks said the bill sought to prohibit entirely, the killing and export of donkeys to China saying that China was using the donkey skin for their traditional medicine.
“This animal is facing extinction and it’s an animal you cannot breed in large number because of the very low rate of fertility.
“The major beneficiary in this trade is the donkey breeding merchants in China with a profit of 293 million dollars in 2016 to the detriment of the rural people of Africa and Caribbean.”
Earlier, the chairman of the committee, Enagi said the public hearing was designed to receive inputs from stakeholders and the general public in a bid to come up with relevant legislations that would promote agriculture in Nigeria.
“You will recall that these important bills were read first and second time in the Chamber of the Senate as per the practice.
“Cursory look at the bills would reveal to us that they are out to serve similar goals and purposes: ensure food security and healthy diet for our citizens, create jobs, develop the sector through various value chains and to reposition the agricultural sector in our economy,” he noted.
He said the committee through the Senate leadership repositioned the agricultural sector to increase its contribution to the Gross Domestic Product (GDP) and achieve the objective of the global food organizational policies.
Other bills considered at the public hearing included Nigerian Research Institute of Fisheries and Aquaculture Bakassi (Establishment) Bill, 2022 and National Food Safety and Quality Bill, 2020 and National Veterinary Research Institute, Gombe (Establishment) Bill, 2021.

7 Incredible Health Benefits Of Strawberries And Why You Should Eat More... Click Here For Details
Tags: Donkeys
SendShareTweetShare
Previous Post