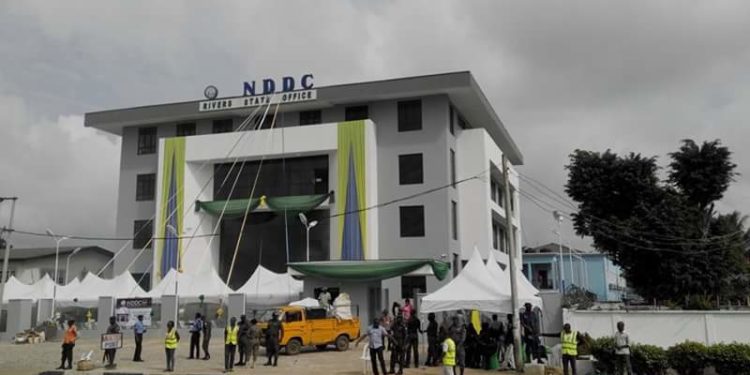 The Pan Niger Delta Forum (PANDEF), has blamed top politicians’ wrong attitude over the years for the lackluster impact of the Niger Delta Development Commission (NDDC) to the region as some political gladiators in the ruling party, All Progressives Congress (APC) from the South-South zone are still battling to influence the appointment of their cronies into the board of the Commission.

In a telephone interview with LEADERSHIP yesterday, the national publicity secretary, PANDEF, Ken Robinson, said the problem of the Commission has been the attitude of those who have been appointed over the years to run its affairs and that of government towards the Niger Delta region.

LEADERSHIP gathered that top political gladiators, who lost out in the last presidential primaries of the ruling party, are re-strategizing and fighting hard to gain control of the NNDC. President Muhammadu Buhari recently hinted that the much-awaited board of directors for the commission would be appointed soon, in apparent response to popular agitation from stakeholders.

There have been misgivings from stakeholders in the Niger Delta over speculations that the government might again extend the tenure of the agency’s Interim Management Board that has been piloting its affairs since 2019.

According to Robinson, ‘‘NDDC is seen as a place to compensate people for party loyalty. There was a report that one of the board chairmen of the Commission once said that he was appointed to reward members who worked for his party. That is the attitude, they see themselves as proxies of those in Aso Rock to enrich themselves and accumulate money for the next election.

‘‘Development of the region has not been the desire of those who occupied positions in the Commission. If we have to see the dynamics in the NDDC change, the government and those appointed should change their attitude. The people of the Niger Delta should also be more demanding and concerned.

‘‘Lack of cooperation of political leadership is also another problem of the NDDC, they are not working together in the overall interest of the region. Everyone is trying to boost political war chest.’’

Politicians are said to be individually backing different candidates for juicy offices in NDDC. Two former ministers, Rotimi Amaechi and Godswill Akpabio, as well as the minister of state for petroleum resources, Timi Sylva, are understood to be engaged in fierce jostling to influence the appointment of a new managing director and the strategic finance director for the body which has been run by a care-taker since 2019. Also deeply involved in the high-stake game is deputy senate president, Ovie Omo-Agege.

According to sources, Amaechi, strongly believed to have influenced the appointment of Umana Okon Umana as the new Niger Delta minister, is said to be leveraging his access to Aso Rock to get his nominee from Rivers State appointed as managing director. Amaechi was said to have influenced the appointment of the two immediate past substantive managing directors of NDDC, Mrs Ibim Semitari and Mr. Nsima Ekere who was arrested by Economic and Financial Crimes (EFCC) over alleged N47b fraud in NDDC.

Akpabio, on the other hand, is said to be rooting for Denyabofa Dimaro, 76, who also reportedly enjoys the backing of Umana. The age factor, according to some people, could work against Dimaro.

Amaechi and Akpabio failed to clinch the presidential ticket of APC after they had resigned their portfolios as minister of Transport and Niger Delta Affairs respectively in April. Also, Akpabio’s subsequent bid for the senatorial ticket for Akwa Ibom north-west currently hangs in the balance.

Already, the council of Traditional Rulers in Bayelsa have declared that it is the turn of Bayelsa to produce the managing director for the agency. Meanwhile, the minister of state for petroleum resources, Timipre Sylva’s move to impose Maxwell Oko, his Bayelsa kinsman is said to be facing strong resentment among stakeholders, who complained that he already has his cronies in juicy appointments. They said the recently appointed substantive Executive Secretary of the Nigerian Content Development and Monitoring Board (NCDMB), Engineer Simbi Kesiye Wabote, is said to be the minister’s cousin and the chairman of Nigeria Liquified Natural Gas (NLNG) board, Chief Edmund Daukoru, appointed in July 2020, is also widely known to be his mentor and was his boss during the Obasanjo administration.

On the other hand, Omo-Agege is said to be unrelenting in his bid to influence the emergence of Sam Mgbuku as the managing director despite his ongoing legal entanglement over “a serious case”.

In the face of mounting opposition to Oko, the Sylva is said to have worked out a Plan B by seeking an alliance with Omo-Agege, who hails from Delta State, such that Oko would be considered as finance director for the agency while Mgbuku would be managing director.