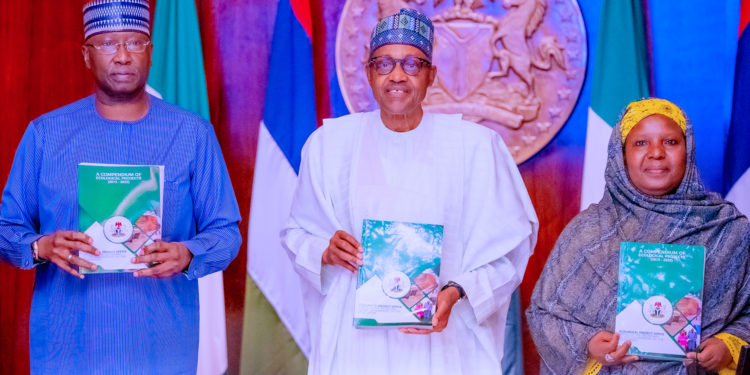 A total of 266 ecological projects have been completed across the country in the last seven years (2015-2022), President Muhammadu Buhari declared Wednesday in Abuja.

Speaking at the launch of a compendium of ecological projects undertaken by this administration, the President in a statement by presidential spokesman, Femi Adesina, said 332 ecological projects were approved during the period in review, out of which 266 were accomplished while the remaining 66 are at different stages of completion.

The President, who launched the publication before the commencement of the weekly Federal Executive Council (FEC) meeting, commended the Secretary to the Government of the Federation and the Management Team of the Ecological Project Office (EPO), for the judicious use of available resources for the effective implementation of approved projects, as well as the initiative for the publication.

In order to leverage the benefits accruable to government from the commendable efforts of the EPO, and the effective communication of these efforts through the publication, the President directed Ministries, Departments and Agencies (MDAs) which have not done so to showcase their performance and achievements to the public.

‘‘It is against this background that publications like the one being launched today, become very important and a useful tool in correcting the negative public perception, that government has not done anything in addressing these challenges.

‘‘The documentation and publication of these achievements in our modest effort to tackle ecological problems is therefore predicated on our quest to improve communication in governance, as a tool for keeping citizens well-informed and helping them to hold government accountable.

‘‘This is the most significant implication of the Ecological Project Office’s initiative in publishing this compendium,’’ he said.

The President noted that the compendium, which is for the reading pleasure and knowledge of Nigerians, would bridge the information and communication gap between Nigerians and the real-time performance of this Administration by portraying the specific locations of ecological projects, with pictorial evidence as well as proofs of handing over the projects to the beneficiaries.

Secretary to the Government of the Federation (SGF), Boss Mustapha, told the President that the 554-page publication supervised by the Permanent Secretary, EPO, Dr Habiba Lawal, is aimed at keeping the public abreast of the efforts of the administration in addressing verified ecological problems in ‘‘all the nooks and crannies of Nigeria.’’

He thanked the President for promoting the culture of accountability and for approving the change of name of Ecological Fund Office to EPO, for its mandate not to be misconstrued by the public.