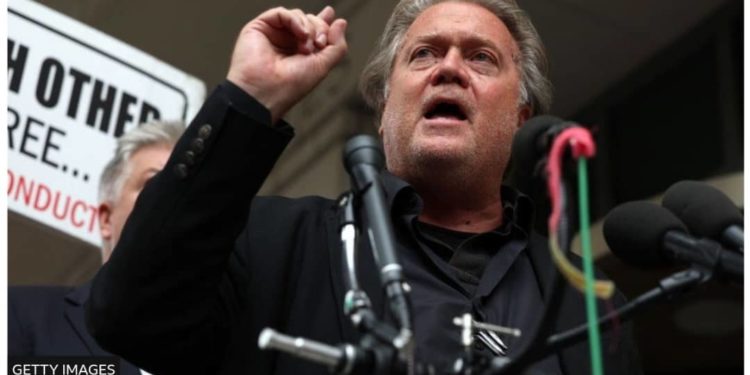 A US jury has found former  President Donald Trump’s strategist, Steve Bannon, guilty on two counts of contempt of Congress.

Mr Bannon, 68, was indicted last year over his failure to co-operate with the congressional committee probing the events leading up to the Capitol riot.

The former White House chief strategist is said to have been an unofficial adviser to Mr Trump at the time of the insurrection on 6 January 2021.

Mr Bannon will report to probation officers before leaving the court on Friday.

His sentencing hearing has been set for 21 October.

Lawyers with the US Department of Justice had argued that Mr Bannon felt “above the law” by ignoring a “mandatory” legal summons from the congressional committee investigating the 6 January breach of the US Capitol.

“The defendant chose allegiance to Donald Trump over compliance with the law.”

Despite vowing to go “medieval” on his enemies, Mr Bannon’s defence team rested its case on Thursday without him testifying and without calling any other witnesses.

Attorneys claimed the trial against Mr Bannon was an act of political retribution.

They asserted that rather than ignoring the subpoenas, he believed he was negotiating on them, and also believed the deadlines in the summons were flexible, not fixed.

In closing statements, lawyer Evan Corcoran told the court the path his client Mr Bannon took “turned out to be a mistake” but “was not a crime”.

The 12-member jury panel deliberated for about three hours on Friday before reaching its verdict.

Mr Bannon was a key player in former president Donald Trump’s 2016 election win, serving first as his campaign chief and later taking on the role of chief strategist at the White House.

He left that position amid political fallout from a violent far-right rally in Charlottesville, Virginia, in August 2017. But the podcaster is still considered a top ally of Mr Trump.

The House of Representatives select committee investigating the Capitol riots first issued a legal summons to Mr Bannon in September 2021.

The panel has long believed Mr Bannon was involved in efforts by Trump supporters to storm Congress and challenge the outcome of the November 2020 presidential election.

It is particularly interested in Mr Bannon’s communications with Mr Trump ahead of the incident, as well as “war room” meetings held at a nearby hotel with other key figures, allegedly as part of a last-ditch attempt to thwart the certification of President Joe Biden’s election win.

But Mr Bannon proclaimed his innocence and defied the subpoenas, saying he would turn it into a “misdemeanour from hell” for the Biden administration.

He also maintained his conversations with the former president were covered by executive privilege, a legal principle that holds communications between presidents and their advisers to be protected from disclosure in order to allow for candid advice.

A judge, however, ruled he could not claim privilege in this case.

7 Incredible Health Benefits Of Strawberries And Why You Should Eat More... Click Here For Details
Tags: Trump
SendShareTweetShare
Previous Post