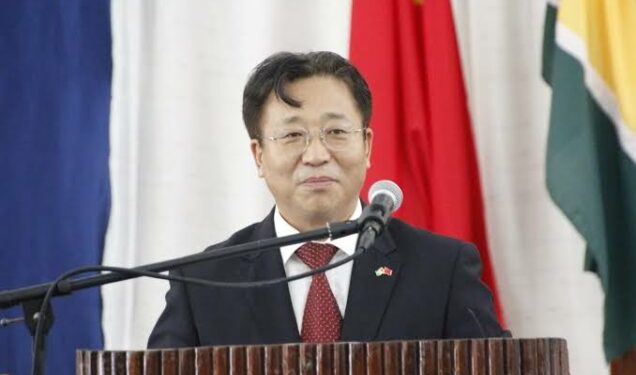 The Chinese government has expressed its preparedness to partner with Ekiti State in the utilization of nuclear science and technology in developing critical sectors of the state.

The Chinese Ambassador to Nigeria, Mr Cui Jianchun stated this when he led experts from China National Nuclear Corporation (CNNC) and other Chinese  delegation on a courtesy visit to Governor Kayode Fayemi in Ado- Ekiti, the state capital.

The Chinese Ambassador who noted that the partnership will include the development of the state knowledge Zone project was accompanied by the Director General, Nigeria Atomic Energy Commission (NAEC), Professor Yusuf Ahmed.

The partnership with CNNC, according to him, is a technological collaboration that would promote understanding on how to peacefully apply nuclear energy to serve the people of the state.

Jianchun was in the state for a three day feasibility study of the Ekiti Knowledge Zone and how to apply nuclear technology in the development of agriculture, health, biotechnology, education and other critical sectors of the state.

In his remarks, Governor Fayemi explained that his administration was passionate about knowledge generation, knowledge development and knowledge transmission as well as wealth creation for the benefit of the people of the state.

Governor Fayemi expressed the readiness of the state to explore nuclear energy in the development of agriculture, education, health, biotechnology and a whole range of other sectors to the advantage of the entire people of the state.