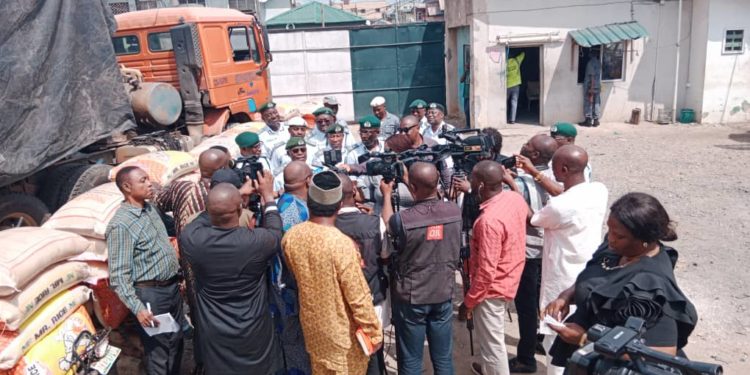 Due to the federal government’s ban on the importation of Tiger generator, popularly known as ‘I better Pass My Neighbour’, due to air pollution, importers now smuggle the generating sets through the porous nation’s borders.

LEADERSHIP reports that in 2015, the Federal Government placed a ban on the importation of small generators popularly known as ‘I pass my neighbour’ due to pollution and risks to the respiratory system, which are dangers associated with all engines that use hydrocarbon energy to operate.

According to him, the unit has renewed its vigour to fight the menace of smuggling, saying it has re-strategised its operations to block revenue leakages and curb the importation and exportation of prohibited goods.

He, however, disclosed that the Duty Paid Value (DPV) of the seized items is N818.1million

Other seizures are, 812bags of 5Kg and 120 bags of 2kg  basmati rice; 41,950 litres of Premium Motor Spirit (PMS); four 20ft containers of unprocessed wood; 1,041 bales of used clothes; 5 units of vehicles; 8,500 pieces of used tyres were also intercepted from the porus borders in the South-West.

Ejibunu said, “These seizures were made from various locations within the Zone South-western States with 14 suspects arrested in connection with the crimes. The cumulative Duty Paid Value (DPV) of the seized items is N818.1milliion. Prominent among the goods seized within the month under review are 16 trucks load of 50kg bags of smuggled rice; 812 bags of 5Kg and 120 bags of 2kg of basmati rice; 41,950 litres of Premium Motor Spirit, also known as, petrol; four by 20ft of containers of unprocessed wood; 1,041 Bales of used clothes and 5 units of vehicles.

He also disclosed that the unit generated N64.3million from Demand Notices (DN) on cargoes that exited the port without paying accurate duties to federal government.

He said, “consequent upon painstaking documentary checks on some already released cargoes, duties found to have been under paid were reviewed and demand notices issued in the the sum of N64.3million was paid as revenue into the federal government coffers.”

“High desire by majority of Nigerians to consume foreign parboiled rice, has a nexus with the number of smugglers scrambling to import the product in large quantities. Citizens are once again, reminded of the need to support and key into the federal government’s policy aimed at supporting the growth of its local product.

“During the preceding month, officers of this Unit were on high alert along the port and the border corridors to ensure that, the national economy is protected from the activities of recalcitrant importers and traders. In the course of duty, various goods were intercepted for different Customs offences, ranging from inaccurate duty payment evasion, concealment, under declaration, false declaration, transfer of value, to smuggling.”