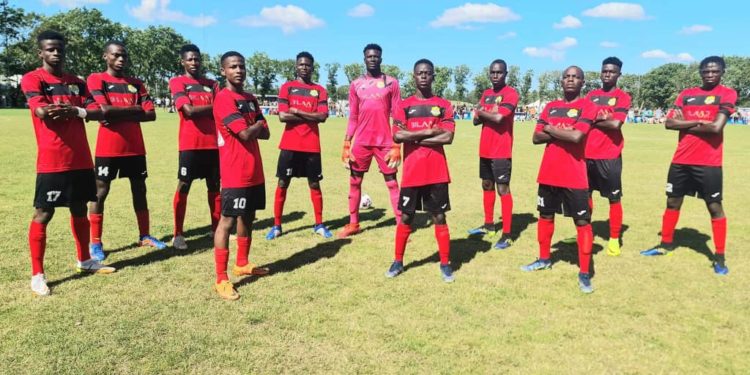 Abdul Maiyadi and Miko Dalha’s strikes in each half ensured the only Nigerian club in the International Youth Championship Denmark qualified for the final fixture of the 2022 edition in the sports city of Hjørring.
The game proved to be harder for unbeaten Mailantarki Boys in the first quarter of the encounter as the game traffic moving from either side and of course Varbergs forward forced our goalie Edward Ameh for an early safe after diving to his right to push away the goal-bound effort.
In a swift response, the Amazon Kayakers from Nigeria embarked on an impressive attacking run masterminded by Ibrahim Sani Dembele to the part of Miko Dala who blasted an effort just for the goalie to make a brilliant safe but he can not stops Abdul Maiyadi’s curling effort few minutes later as he got beaten into his far post from the edge of the box to give Mailantarki boys the lead at the break.
Both teams resumed from the locker rooms with much vigor but our boys were much better as they took many shares of the possession courtesy of the 4-3-3 formation with Hamza Sani, Ibrahim Sani and Abdul Maiyadi in the middle of the park.
The club president Honourable Khamisu Mailantarki who is with the team at the tournament was highly impressed with the masterclass performance of his boys for being unbeaten coupled with the record-breaking 39 goals so far ahead of the final game tomorrow against Vidar FK of Norway.
“I thank Almighty Allah for the huge success we achieved so far, we still need to take this display to the final and we are very much confident we will bring the trophy to Nigeria”.
The final fixture will take place tomorrow (Saturday 30th July l, 2022) by 2:15 pm (1:15 pm Nigerian time) at the main Nord Energy Arena Stadium in Hjørring, Denmark, and it’s going to be streamed live via a dedicated DanaCup22 channel.