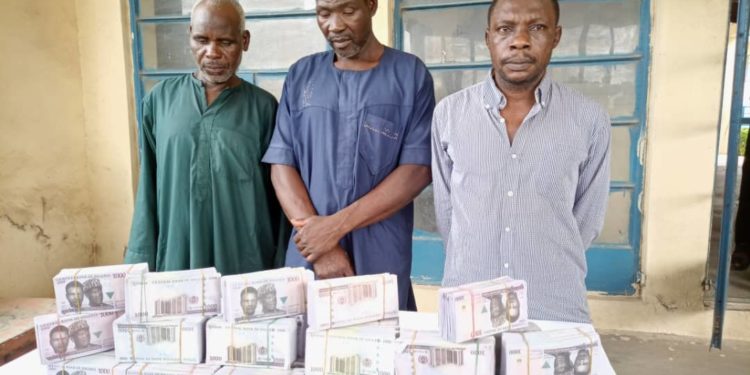 The Police in Delta State has arrested three suspected child traffickers and a suspect in possession of fake naira notes amounting to N80,000.

The suspect was alleged to have made a POS transaction with fake naira notes with the intent to defraud the POS operator.

The Eagle-Net Special Squad sighted a mob, attacking the suspect at Oko New International Market in Asaba, and the team while on routine patrol along Asaba/Onitsha bridge rushed to the scene and rescued the suspect named Michael Ozor age 45 years.

He was arrested with the fake naira notes to the tune of N80,000 which was recovered from him.

Also on 24/6/2022, the Command received a complaint via petition to the Area Commander, Asaba, written on behalf of a victim of child trafficking (name withheld) age 13yrs, a native of Izza North LGA of Ebonyi State, who was to be taken to Onicha-Ugbo for prostitution.

According to the statement, a combined team of Policemen and vigilantes embarked on an intelligence-led operation, which led to the arrest of three suspects namely; Ado-Obi Oguguo ‘f’ age 38 years, Chidima Osita age 36 years and Nkirnka Ikechukwu ‘f’ age 30 years, all residing at Omerigboma Village Oko, Oshimili South, Delta State.

“Preliminary investigation revealed that, suspects were into prostitution and on 22/6/2022, they arranged for a girl named Chidima surname unknown age 16yrs to be taken to Mali for prostitution.