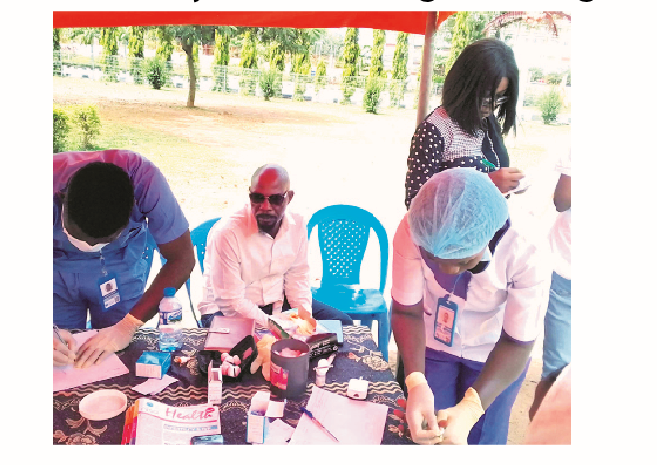 As Nigeria struggles with the rising prevalence of diabetes and other non-communicable diseases in Nigeria, coalition of health organisations have advocated for policy implementation towards improved access to care.

This is because SSBs are known as the main sources of added sugars in diets, which increases the risk of diabetes.

According to the National Action on Sugar Reduction (NASR), a coalition of health organisations, “Nigeria is the 4th highest ranking soft drink consuming country in the world. As at 2019, Nigeria was ranked 7th highest per capita consumption of carbonated soft drinks globally with 498 ounce servings consumed annually.

“38.7 million litres of soft drinks are sold yearly, contributing to the prevalence of NCD related diseases. $4.5 million Is spent yearly by Nigerians on the treatment of Diabetes – only one of a number of NCDs. 29 per cent Of deaths in Nigerians are NCDs related (diabetes, obesity, cardiovascular diseases).”

Also, a recent data estimates that about six million of adult Nigerians are living with diabetes. Meanwhile, experts have opined that this figure may be far from reality as estimated two-third of diabetes cases in the country are undiagnosed, resulting in increase in the burden of diabetes complications and deaths.

To this end, the coalition has called for implementation of the enacted SSBs tax, saying this is critical given the rising Non-communicable Diseases (NCDs) prevalence in the country.

Meanwhile, as part of activities to ensure effective knowledge and awareness among citizens and stakeholders,  the health organisations used the 2022 World Diabetes Day commemoration to launch a comprehensive campaign to raise awareness about the need for the  government to successfully implement the new tax and increase resources to develop a national response on diabetes and other NCDs.”

World Diabetes Day is commemorated every 14th of November to raise awareness on the growing burden of diabetes and strategies to prevent and manage the threat. The theme of this years is “Diabetes: Education to protect tomorrow”.

Speaking during the event in Abuja, the president, Diabetes Association of Nigeria, Dr Alkali Mohammed, said reducing the burden of diabetes requires education regarding accurate diagnosis and risk factors for NCDs”.

He noted that  8.2million Nigerians were at risk of diabetes even as about 6 million people were already living with the disease, adding that inline with this year’s theme, “We are passing the appropriate education to people living with diabetes so that they take proper action to manage their disease and also prevent complications.

“To the health workers on the need to manage the disease correctly and also to actually update their knowledge so that patients can manage based on current available practices and also to educate the policy makers to take the appropriate actions that will allow the control and management of the disease so that we stop the current widespread of the disease in the country.”

On diabetes treatment, Alkali said the cost has more than doubled mainly because of dollars and also because of the general inflation in the  country.

“Most of the commodities that are used in managing diabetes are imported and as a result, any change in dollar will affect it and that has contributed. In Nigeria, treatment is mostly out-of-pocket,. We are happy that government is expanding the scope of National Health Insurance Authority (NHIA) coverage and we hope that attention should be given to diabetes. We also feel that government should subsidise the treatment in terns of the drugs and also the commodities,” he said.

Also speaking at the event, the communications coordinator, Nigerian Health Watch, Thelma Chioma Thomas-Abeku, said the campaign was to tell Nigerians what they needed to know.

“Recently, the coalition was able to ensure that we get tax on Sugar Sweetened Beverages and we are still advocating that the money coming from that tax should be use to treat non-communicable disease in the country.

“These are some of the communications that we are bringing up this morning to ensure that Nigerians are up to speed with testing, eating right, exercising right and further to what we have done so far, we will continue to advocate for Sugar Sweetened Beverages, making sure that Nigerians know that this is harmful to their health,” she explained.

Sharing his experience of living with diabetes, the secretary general, Diabetes Association of Nigerian, Comrade Bernard Enyia, lamented the cost of managing diabetes presently in the country, saying he spends about N75,000 monthly.

“The treatment is just one side, then for you to diet properly as a diabetic patient, you must spend a lot of money. So it has cost me a lot of expenditure because even the policies of government do not favour us 100 per cent but I ensure I safeguard my life.

He called on government to pay attention to diabetes. “At the level of policy, there is an improvement but the level of implementation is what is still a problem.

“There are some states that don’t even have a desk officer for non-communicable diseases. So it’s difficult  to implement any diabetes activity in such states, like we are marking this World Diabetes Day, there are some states that are not even aware of it. they are living everything go private organisations that are limited with funds. The government should support organisations that are doing intervention on diabetes and support them, he added.

On his part, a medical doctor at the Nisa Premier Hospital, Dr. Amuta Wilson, said  diabetes is a fast rising non-communicable disease, adding that type 1 is not preventable but can be managed by adherence to medications,

Amuta noted that life style modification remains a cardinal key in the control of blood sugar. “Lifestyle modification ranging from your diet, reducing the calories, eating appropriate protein, taking adequate water, eating vegetables and then exercise,  brick workout one hour everyday because this exercise helps to drive the glucose inside the muscles.

“I want to encourage Nigerians that it is a battle that we can win but we have to play our part, it’s not all about drugs, lifestyle modification is very important,” he urged.

Meanwhile, the minister of health, Dr. Osagie Ehanire, has reiterated governments commitment to providing leadership for control and prevention of non-communicable diseases by strategically pursuing the elimination of risk factors, improving access to clinical care for the diseases as well as preventing their complications.

He expressed the optimism that with  partnership and collaborative efforts particularly in the rural areas, diabetes would be reduce to its barest minimum.

Why People Should Not Panic Over Hair Loss – Otubanjo