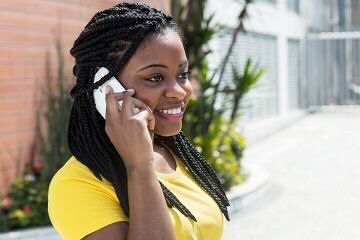 As of the time Ajayi was saving for the phone and SIM card, he was single but was dating his university sweetheart, who lent him some of the money he used in purchasing the SIM card.

Today, Ajayi and his wife have three children, who all have the smartest smartphones in town and are using more SIM cards and internet services than their parents.

“These children don’t know how we suffered to get these things back then,” Ajayi sighed. “These days, everything is within their reach, at almost no cost.”

Unfortunately, Ajayi’s three children do not reason or believe in their father’s stance on “at almost no cost”. And they are not happy when their mother laments that all they know is to get glued to their gadgets and waste money on calls and texts.

Ajayi’s first child, Kemi, is eighteen years old and at the university. She wishes her mother understands that the pocket stipend she gives her is not enough for the number of calls and data she uses every week for her studies and social media engagements.

However, a month ago, Kemi stumbled on an app, Dingtone, while surfing the internet for a better solution to her call and text cost challenges. She read about the app and regarded it as one of those regular apps he had used with nothing better to offer.

The next day, she asked her classmates if they had heard about the app, and they said no. Only one person, a boy, who has been using the app for some weeks, said yes.

“Are you sure it’s not one of those ‘Yahoo Yahoo’ apps?” one of Kemi’s classmates sighed.

“No,” the boy replied. “In fact, it makes my calls and text usage cheaper, or even free by watching ads.”

Kemi raised her eyebrows. “No way.”

She downloaded the app immediately in Play Store and witnessed it herself.

Founded in 2012, Dingtone has become a renowned phone services provider that helps people stay connected and lower phone bills with its reliable services. The company currently serves more than 100 million users in more than 200 countries and regions in over 30 languages worldwide. Dingtone has built a strong case for itself by establishing itself in North America, Eastern Europe, Southeast Asia, South America, and African markets. With a solid market foundation and a wide range of users, Dingtone has been one of the leaders in the VoIP telephone industry in the world.

Currently listed among top grossing apps in Nigeria, Dingtone wants to convey the messages that they are striving to provide reliable and affordable phone services for Nigerians as a solution to cut down phone bills, promote the economic growth of international trade, and bring closer connections for immigrants and their family members.

According to Tiger Liu, Vice President of Product at Dingtone, Nigeria is the first choice for Dingtone to open up the African market. He noted that Dingtone has been recognized by Nigerian users and is currently listed 2nd in Nigeria’s Google Play Store best-seller list of social apps and the 39th on the free app list of social category.

“In the Apple App Store, Dingtone is also listed the No. 1 on the Top Grossing Social Apps and 34th on the Free Social Apps List. We aim to constantly improve the user experience at every touchpoint,” Liu said. “We are dedicated to offering flexible and affordable phone services for everyone to help relieve the financial burden, protect the privacy and create closer connections.”

Janie J. has been using Dingtone services for a while now. She stated that starting a business is challenging, and juggling business processes and childcare responsibility is a constant struggle.

“Easy-to-use and cheap online tools on the market provide increased opportunities for me to jump-start the process of launching my business,” Janie J said. “I found and built connections with my early customers through a Dingtone phone number, which truly helped me through the rough initial stages.”

Describing Dingtone’s app and services in an article, Forbes noted that it offers a solid set of telephony features along with basic texting and calling, adding that “in addition to your free phone number, Dingtone lets you make conference calls and send faxes at no cost. Getting more business features will make your burgeoning business look even more professional.”

According to Uzomadozie, with apps such as Dingtone, communication in Nigeria has seen massive growth over the last few years and this has become part of people’s lives.

“Now one doesn’t have to depend on phone connectivity or fear paying huge bills. These apps have made communication much more effective as they are easily accessible, facilitate instant conversations and charge less money.

“This has been an enabler for the Nigerian economy and its positive effects are definitely becoming more evident across industries, businesses and most importantly improving personal relationships,” he stated.

Like Kemi, there are tens of millions of Nigerians who are frustrated on a daily basis by the unreliable call and text services offered by the major telecommunication companies and are looking elsewhere for a stable and cheaper alternative.

Kemi and her classmates, since they discovered Dingtone, have been using the platform for all kinds of things ranging from calls, texts, virtual meetings, social media registration and interactions, among others.

“My mother even uses the app,” she chuckled. “I don’t worry her about money for calls and texts anymore.”

Kemi believes that Dingtone App is the future of call and text message services for Nigerian students and youths from underprivileged backgrounds.

Unicaf signs Memorandum of Understanding with She Works Africa