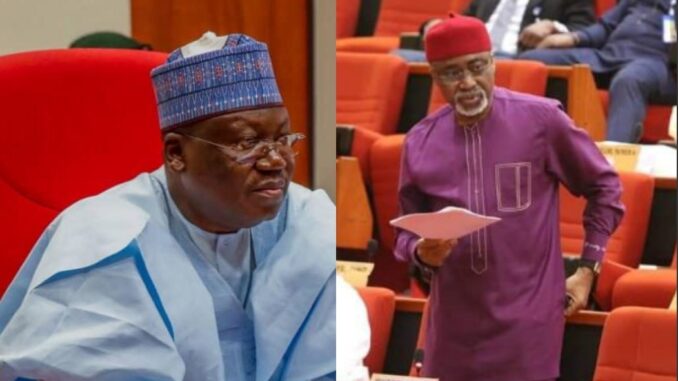 There was a mild drama on the floor of the Senate on Wednesday as the Minority Leader, Senator Enyinnaya Abaribe (Abia South), was unable to formally defect to the All Progressives Grand Alliance (APGA) for a technical reason.

The development was occasioned by the inability of the Senate President, Ahmad Lawan, to come with his defection and resignation letter to plenary.

Although an announcement to that effect was made by the Senate President, it was, however, agreed that Abaribe’s letter be formally read on the floor before his exit as Minority Leader, after a point of order was raised by Senator Gabriel Suswam.

In the same vein, two prominent members of the All Progressives Congress (APC), Senate Majority Leader, Yahaya Abdullahi, and Adamu Aliero, have officially defected to the Peoples’ Democratic Party (PDP).

On the other hand, the formal defection of Senators Yahaya Abdullahi and Adamu Aliero  from Kebbi State, were conveyed in two separate letters addressed to the Senate President and read on the floor during plenary on Tuesday.

The defection of the APC Senators brings the total number of PDP Senators to 39 from the previous 38, with the exclusion of Abaribe who is set to formally defect from the opposition party to APGA on Wednesday.

It also cuts down on the number of APC Senators from 71 to 69 in the upper chamber.

The Senate Leader, in his letter titled, “Defection From APC to PDP And Resignation As The Majority Leader Of The 9th Senate”, said his decision was informed by the democratic challenges and deficits faced by the APC in Kebbi State.

He explained that all attempts to remedy the situation through the intervention of North-West Zone Governors’ and the defunct Abdullahi Adamu-led National Reconciliation Committee failed.

The letter reads, “I write to inform you of the withdrawal of my membership of the All Progressives Congress (APC) and consequently resign from my position as the Majority Leader of the 9th Senate.

“I came to this decision after a very hard struggle with my conscience and emotions. It is either to remain on the side of my people, or to selfishly look the other way. All politics is local. I cannot therefore in good Conscience, continue to work for the success of this administration at the centre while the people of my state, my primary constituency, continue wallow in abject poverty and destitution under the misrule and manipulation of a despot.

“I have therefore decided to pitch my tent with the Peoples Democratic Party (PDP) in order to join forces with my compatriots at home who are struggling against incompetence, imposition and violation of democratic norms, principles and practices.

“The democratic challenges and deficits in my state, Kebbi State, did not just start from the last congresses, but right from July last year when the governor illegally decapitated the State Leadership of the Party, imposed unelected ward, Local government and State executives of the Party.

“This matter was brought to the attention of the caretaker Committee of the Party who failed to bring the Governor to order.

“Efforts by all well meaning individuals including Your Excellency, Mr. President, were equally spurned. The North-West Zone Governors’ entreaties were ignored. The defunct Abdullahi Adamu-led National Reconciliation Committee’s intervention to find amicable resolutions failed. All primarily due to the manipulative intransigence of the Governor.

“At a point I thought of resort to the courts, but decided against that course of action after realizing that political challenges require political solutions in the democratic arena where it is the people and not the judges who are the final arbiters.

“So, after having failed to get justice in my former Party, the APC, I have jumped ship to the PDP together with our teeming supporters in a struggle to democratically bring to an end the misrule and tyranny currently gripping Kebbi State.

“Mr. President, I appreciate and will continue to support your leadership. I cherish and remain eternally grateful to you and all my colleagues for the unconditional support and cooperation rendered to me in the last three golden years of our tenure.

“A tenure that witnessed unprecedented unity, productivity, sense of purpose and patriotism in the conduct of our legislative responsibilities. l also plead with any of my colleagues whom I have offended in the course of our interactions to please forgive me.

“While praying for Allah’s guidance and peaceful journey to the forthcoming elections, please accept the assurances of my highest respect and esteem.”