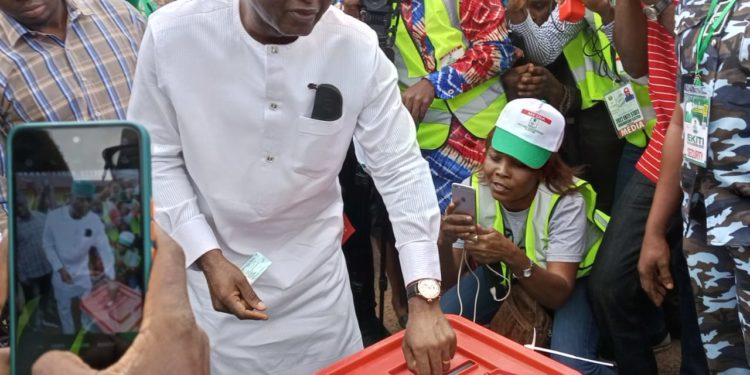 The duo said the technology has improved the credibility of the poll and has given the voters confidence in the electoral system.

The PDP candidate, who spoke with journalists in Efon Alaaye, Efon local government area of the State after casting his voting around 8.35am at Ward 008, Unit 001, said: “There is great improvement with the application of BVAS. The accreditation and voting were done simultaneously. 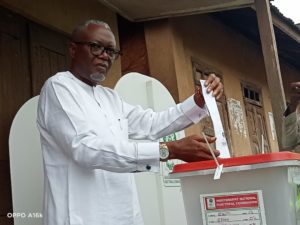 “The process has been accelerated by this. There is an improvement by INEC.

“I am not saying there won’t be manipulation, but the security is doing fine, so as of now we are having a peaceful process.

“My fears are the general ones that people can become violent as reported in some cases in the past. Though the security men are on ground to respond to such situation,” Kolawole said.

Also, speaking in Ikogosi-Ekiti, Ekiti West local government area of the State after casting his vote at Okelele ward 06, unit 003, APC’s Oyebanji said INEC has made the process faster and credible.

“This is an improvement and my expectation is that I will win. I am happy that there was no case of apathy. The security build up has also been impressive. So, the process has been good and fine.

“I am coming with a change agenda and my manifesto is clear about the changes I am bringing,” Oyebanji stated.

He hailed the voters for enthusiastically trooping out en masse to cast their votes, saying there wasn’t any case of apathy with the reports he had been getting across the 177 wards.

Also, the Commissioner for Local Government Affairs, Prof. Adio Folayan, who voted at ward 04, unit 004 in Efon Alaaye, praised INEC for the exercise.

“You could see people exercising their voting rights unhindered. The situation is calm. There is efficiency in the application of BVAS.

“I voted within five minutes. But in ward 7, the machine was not working and we are seeking replacement and we believe INEC will respond to this,” Folayan said.