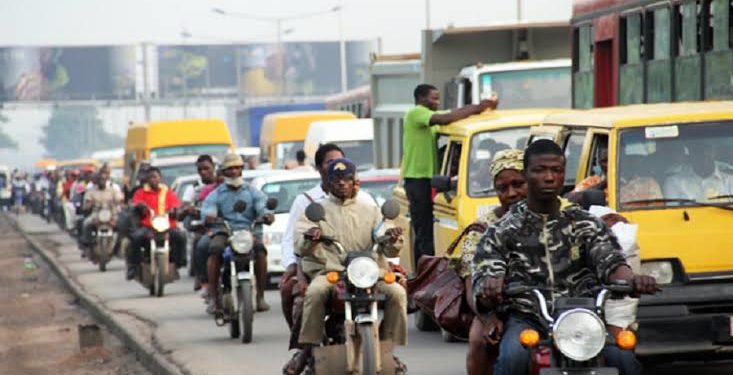 There is no doubt motorcycle riders popularly called Okada riders are a clear and present danger to society.

Recent events show that their excesses need to be curtailed before they turn the law on its head.

Nigerians were outraged recently In Lagos, when a sound engineer, identified simply as David, was allegedly beaten and set ablaze after a scuffle with Okada riders in the Admiralty area of Lekki, Lagos State.

Also in Abuja, Okada riders in their numbers went on a rampage at the Timber market in Dei Dei and set it ablaze, following altercations between the traders and the motorcycle riders after a woman was killed by a trailer driver.

An eyewitness account said the crisis started after a motorcycle carrying a woman ran into a trailer and the trailer crushed the woman to death, that after killing the woman, the driver of the trailer refused to stop and he drove off but was later caught at Deidei junction.

“That was the beginning of the crisis, the motorcycle riders who were visibly angry went back and mobilized themselves from every direction they could penetrate and decided to set the timber shades on fire.

Also recently in Abuja, over 100 motorcyclists attacked an estate in the Lokogoma area of Abuja to avenge the death of two colleagues. The Okada riders set fire to two buildings in the estate.

The incident happened after a motorist reportedly hit two Okada riders on Sunday and ran into the estate for safety.

This madness by the Okada riders needs to stop. I don’t know where they got the notion that they are above the law.

Again, I ask, what gives them the temerity to take the laws into their own hands. They burnt two houses in the estate in Abuja making people lose millions of investments.

No matter how aggrieved any individual or group is, no one has the right to take laws into his hands. We have the security agencies and the judiciary to take care of that.

The problem with the banning of Okada is that most of the states don’t have an efficient transportation system. The truth is as long as we don’t have an effective and robust mass transit system this okada ban in most states will never work. That is why most states like Lagos have banned and unbanned Okada countless times with no result. As long as there are users of the services rendered, the government will only ban them in vain

You don’t even need enforcement when people see they don’t need okada service because there are better options to commute at their beck and call.

Besides, Okada is also a means of livelihood for a lot of these folks so what alternatives are they left with. A total ban will lead to an upsurge in crime and other deviant behaviors.

I say it consistently that crimes continue to surge in this country because there is no punishment for bad behavior. The excesses of Okada riders have continued unabated because there have not been punished for their bad behaviors.

The security agencies need to wake up from their slumber. I think we need a total overhaul and orientation of our security agencies, especially the police. The military has practically taken over police duties in the country because of the inefficiency of the police. We need to fund and equip our police force to function effectively.

The police should swiftly arrest and prosecute Okada riders who take laws into their hands. There should be stiffer punishments for mob actions and jungle justice. If bad behaviors are consistently punished, the Okada riders will have “a reset of their brain” as we say in local parlance.

Public Vs Private Schools: Plan To Join The Education Marathon 1.0