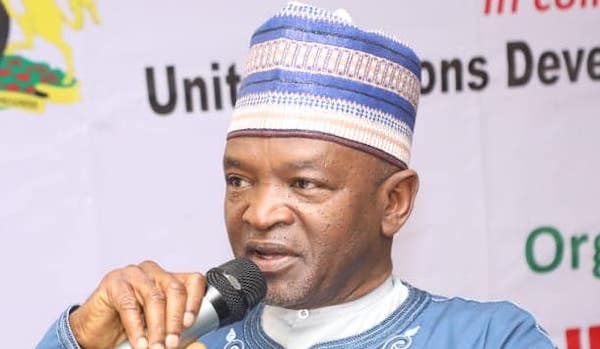 Minister of agricultureand rural development, Mohammed Abubakar, has disclosed that 60,000 metric tonnes of grains are currently domiciled in silos, under the national strategic grain reserve.

According to him, the grain reserve stood at over 79,277 metric tonnes, part of which was distributed by the federal government to cushion the effects of the COVID-19 pandemic on the most vulnerable Nigerians between 2020-2021.

He explained that through an aggressive agricultural policy, about 3.6 million indirect jobs were created from $1.113 billion (about N461.9billion) worth of externally funded projects being implemented by the present administration.

He revealed that $538 million was approved for special agricultural processing zones to support inclusive and sustainable agricultural development in Nigeria.

According to him, another project worth $575 million is being implemented to improve rural access and agricultural marketing in participating states while strengthening the financing institutional base for effective development, maintenance, and management of rural roads network.

Additional Financing (VCDP-AF) 2020- 2024 to enhance, on a sustainable basis, incomes and food security of poor rural households engaged in the production, processing, and marketing of rice and cassava.

He revealed that the project is currently being implemented in nine states including Niger, Benue, Ogun, Ebonyi, Taraba and Anambra, Nasarawa, Kogi, and Enugu “to scale up the achievement recorded in the original VCDP states.”

But responding to speculations of soaring food prices despite these spirited interventions of government, Abubakar said they were not peculiar challenges to Nigeria, rather it was a reflection of the global economic value chain system.

He said Nigeria being part of the international community is exploring ways to manage the situation to suit its peculiarities as a nation.

“We released about 70,000MT(2,333) trucks of Assorted Food Commodities (AFC) approved by Mr. President to cushion the effect of COVID-19 pandemic, in 2020 to the vulnerable populace in the 36 States and FCT.

“This was followed by the release of 5,000MT of maize to the Poultry Association of Nigeria (PAN) to stabilize the hike in the price of maize in the open market and to ensure that PAN members remain in business, in 2020. Then there was also an emergency release of 1,480MT of assorted food commodities to support IDPs in Kaduna and Katsina states in 2020.

“Currently releasing 40,000MT of assorted food commodities approved by Mr. President to the vulnerable populace, IDPs through Federal Ministry of Humanitarian Affairs, Disaster Management and Social Development, Religious Bodies and Poultry Association of Nigeria (PAN) to cushion the effect of the high price of food commodities, currently, the National Food Stock balance is 60,000MT of Assorted Food Commodities after the releases”.

Commenting on the impact of the war between Ukraine and Russia, the Agriculture Minister noted that even though COVID-19, and insecurity in some parts of the country are posing threats to the agricultural sector, the short-term mitigation measures and medium-term plans of the government are yielding the desired results.

He explained that FMARD is adopting a multi-stakeholder approach in designing and implementing its mandate; with enhanced private sector involvement in agriculture and sustained efforts to reduce drudgery and enhance value addition. Nigeria can deepen the production of its basic food requirements and create more jobs in the process.

“The success of any agricultural policy and interventions, however, rests on synergy among federal MDAs, and between federal, state, and Local governments.

“Nigeria is not immune from the current situation in Europe. I hope that the recent agreement between the UN, Turkey Russia, and Ukraine on the export of grains through the Black Sea Ports of Ukraine will lead to a drop in the price of grains in the international market, which will, in turn, ease the inflationary trend on the price of food in the country,” he noted.

The Minister also explained that about $35million is being expected from the Mexican government from the export of hibiscus flowers used in zobo production.

“Under this phase about four hundred officers will be trained across the 36 States of the Federation and the FCT. For ease of participation, the exercise has been decentralized and will be held in centres across the six  geo-political zones of the country from 4th – 31st August, 2022. The centres comprise of Abuja for North Central; Benin-City for South South; Borno for North East; Enugu for South East; Ibadan for South West, and Kano for North West. “

Speaking at the function, the National Security Adviser, Major General Babagana Monguno, rtd, said the president has directed the security agencies to tackle the current insecurity across the country in order to ensure the success of the 2023 general elections.

Also speaking, Chief of Defence staff General Lucky Irabor, said the Nigeria military will work with the NPF to ensure the success of the 2023 elections.

He also pledged that the military will uphold and defend the Nigeria constitution during and after the elections.

Also, the Independent National Electoral Commission, INEC, chairman, Professor Mahmood Yakubu said they will participate in the training and work with the police and other security agencies to ensure free, fair and credible elections.

The workshop titled “Enhancing national security capacity for a secure and credible electoral process in Nigeria”, is being organized by the Nigerian Police force and Solar security and consult limited.