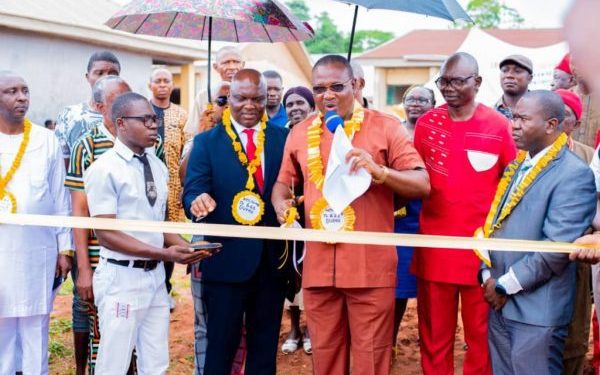 Ezeugwu carried out the charity through his ‘Ikechukwu Ezeugwu Foundation’ as his contribution as an old boy of the school.

The event was graced by government officials, Igwes of all autonomous communities and other traditional rulers in Ovoko, as well as lovers of education who came to witness the commissioning ceremony of the project by the Enugu State Commissioner for Education, Prof Uche Eze.

The lawmaker in his address commended the governor of Enugu State, His Excellency, Rt. Hon. Ifeanyi Ugwuanyi for his innovative mindset and unwavering passion for education.

“From the years I have been with the former administration, I have come to understand and appreciate why Gov. Ugwuanyi has invested so much in education. Education requires enormous funding and Enugu state is ranking high when it comes to promoting science and technology.
As I speak, Enugu State Basic Education Board (ENSUBEB) is set to commence another round of infrastructural projects in our primary and post-primary schools, the Enugu State Scholarship and Education Loans Boards (ESSELB) has recorded immense success too in supporting intelligent but less privileged students in both local and overseas institutions of higher learning” he hinted.
He took time to encourage the students of his alma mater, stressing that education remains the only key to success. He briefly narrated his experience during their time in school and advised that students should take their studies seriously. “Ovoko Boys has produced elites and we will reach out to them so that all hands will be on deck as quality education does not come cheap and the government cannot do it alone” he concluded.
The state Commissioner for Education, Prof. Uche Eze while commissioning the project expressed his heartfelt gratitude towards Hon. Ikechukwu Ezeugwu’s humanitarian contributions to the education sector, he went further and advised the students of Ovoko Boys to remain resolute in pursuing their academic goals.
The senior prefect of Ovoko Boys Secondary School, Master Iheanacho Obetta who began his appreciation note with avalanche of praises ignited by excitement, extolled and prayed for the founder of Ikechukwu Ezeugwu Foundation, “this kind of gesture has never happened since my entry into this school, Honourable Ikechukwu Ezeugwu has given our science laboratory blocks a face lift and we are very grateful to God for his intervention. We pray that God will continue to repay him in double folds, may his cup never run dry, may it continue to overflow with God’s blessings” he prayed.
In his vote of thanks, the principal of Ovoko Boys Secondary School, Mr. Titus I. stated “Today is a remarkable day that cannot be forgotten in the history of Ovoko Boys, I can still remember vividly the day the majority leader of Enugu State House of Assembly, Hon. Ikechukwu Ezeugwu, one of the members of the Old Boys Association came to this school a few months ago to ask me about our problems in Ovoko Boys.
“I answered him, Honourable, our school laboratory needs a total overhaul, he said, this is almost three blocks, but I will do my best. He also noticed that my office was not painted and he painted it swiftly. Today we are here to celebrate the successful completion as this project is being handed over to the Enugu State Government. My teachers and I cannot thank you enough, only the Almighty God will reward you.”

7 Incredible Health Benefits Of Strawberries And Why You Should Eat More... Click Here For Details
Tags: Enugu
SendShareTweetShare
Previous Post

SUBEB Blows Hot Over Razing Down Of School In C/River