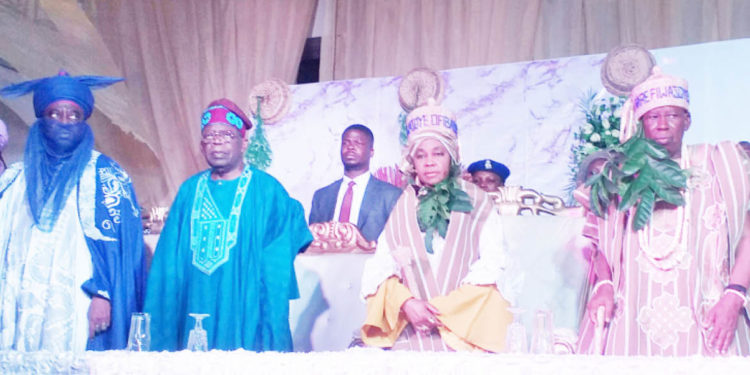 Olubadan of Ibadan land, Oba Lekan Balogun,  Alli Okunmade ll on Saturday said chieftaincy titles, either traditional or honorary, are not for sale in the kingdom.

The monarch while speaking at the installation of Kano State governor, Dr. Abdullahi Umar Ganduje and his wife, Professor Hafsat Umar Ganduje as Aare Fiwajoye and Yeye Aare Fiwajoye of Ibadanland respectively, declared it was not induced financially.

While noting that the event was the first of its kind under this dispensation, Olubadan said, “The factors that came into play for their choice, you would agree with the choice. I want to put it on record, but for our brother, Oba Yoruba Kano, Alhaji Engr. Muritala Alimi Otisese (Adetimirin-1) mine and the paths of today’s Chiefs might have not crossed. It was this brother of ours, who is also a ‘son of the soil’ that introduced the Kano State first couple to the palace.

“From the Oba Yoruba Kano, we got to know how detribalized the Kano State Chief Executive is alongside his wife. We were made to know how supportive our guests were to the aspiration and eventual emergence of our brother as Oba Yoruba Kano about two years ago.

“A man of peace, His Excellency, Dr. Ganduje, it was who came down to Ibadan when there was a clash between Hausa traders and the people of Sasa at Sasa Market the other time to calm the frayed nerves and peace was restored.

“An alumnus of the University of Ibadan, the new Aare Fiwajoye is currently building an auditorium for the University, a project said to have reached 70 per cent completion.

“What is more, if one of Yoruba proverbs that says whoever gives his/her daughter in marriage has got to the zenith of good deeds is anything to go by, then the Gandujes, being our in-laws in Ibadan through their daughter that got married to our son, Idris Ajimobi have done it all.

“Let me sum up it up with two paragraphs from the letter of recommendation by Oba Yoruba Kano thus: Bestowing a befitting Chieftaincy title on the hardworking and amiable governor with his wife will be a reward for a man who has been compassionate to us as a people and who believes that any Nigerian can stay and work in any part of the country without molestation or denial of basic things of life”, the monarch said.