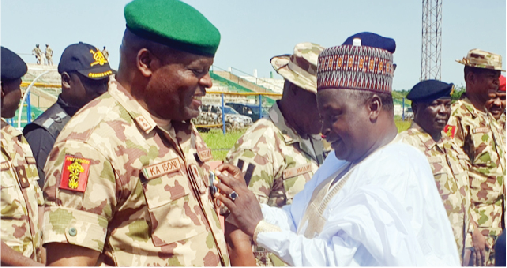 As part of activities marking the celebration of the Nigerian Army medal presentation parades, governor Hon Mai Mala Buni, has decorated officers and personnel of the Yobe State Sector 2 Operation ‘Hadin Kai’ with the army medals over their gallantry and sacrifices in the counterinsurgency operations.

Buni, represented by his special adviser on Security, Brig Gen. Abdussalam Dahiru, while decorating the troops said the performance of the Nigerian Army in Yobe State, has helped in stabilisation of peace in the polity and revival of socio-economic activities in the North East as a region.

The governor stated that despite complications in the war against insurgency, the Nigerian Army has been striving to carry out its operations with extra caution, to ensure that the law-abiding citizens do not suffer damages due to activities of the insurgents.

“It is therefore, a matter of pride to note that in spite of the new challenges associated with the execution of the war against insurgency, the army has continued to demonstrate commitments and resilience towards ending the threat.

“In the process, a lot of army and para-military personnel have paid the supreme price while many others were injured or incapacitated. I pray, may their souls rest in perfect peace and also pray for the quick recovery of the injured.

“I wish to commend all the personnel of the Sector 2 Operation Hadin Kai for their patriotism and being the backbone in executing the war against insurgency in Yobe State from 2014 to date,” Buni said.

The commander Sector 2 Operation Hadin Kai Major Gen. K.A Isoni while speaking said the medal awards was part of moral booster to officers and soldiers of the command in accomplishing assigned mission to their fatherland and contribute towards the attainment of the chief of army staff’s vision of having a professional army in the country.

“We are determined as members of the armed forces to remain focused, disciplined and loyal to the constituted authorities while ensuring that we professionally defeat all the adversaries.

“To the troops of Operation Hadin Kai, I urge you to maintain the spirit of patriotism and continue to give your best in the discharge of your assigned duties and responsibilities.”

Decade Of Insurgency And NEDC’s Interventions In Yobe