1,552 miss out as NAHCON apologises for inconveniences 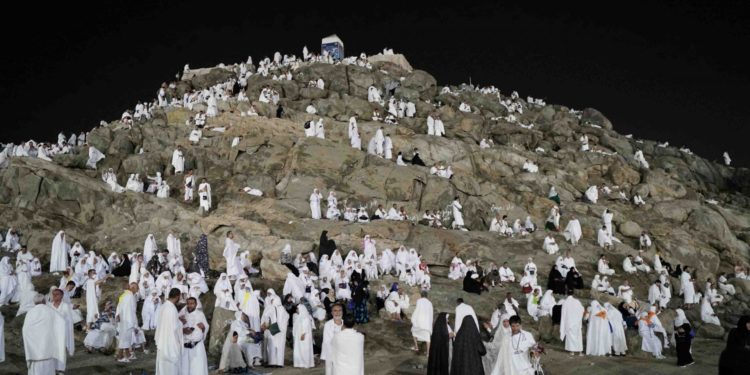 No fewer than one million Muslim pilgrims including a total of 42,000 from Nigeria, have converged on Mount Arafat for the 2022 Hajj rituals on Friday.

The pilgrims will spend the whole day on Mount Arafat as one of the high points of Hajj rituals before moving to Muzdalifah, where they will spend the night, and then return to Muna in continuation of the hajj exercise.

Standing on Arafat is an essential part of the Hajj because it is a site where all supplications by pilgrims are automatically accepted by Allah.

Pilgrims are expected to use the day for prayers for themselves, families, friends, communities, nations and the whole world.

The Hill of Arafat is also known as Jabal ar-Rahmah, meaning Mountain of Mercy.

On the ninth day of hajj, pilgrims leave Muna for Mount Arafat where they stand in contemplative vigil and pray and recite the Qur’an.

It was at the Mount Arafat that Prophet Muhammad (S.A.W) gave his last sermon to the Muslims, who had accompanied him for the Hajj towards the end of his life.

A pilgrim’s Hajj is considered invalid if they do not spend the whole day on Mount Arafat.

Meanwhile, the National Hajj Commission of Nigeria (NAHCON) has tendered unreserved apology to the entire Nigerian pilgrims to the 2022 Hajj for the hardships and disappointments experienced during outbound airlift operations to the holy land in Saudi Arabia.

The Commission offered similar apologies to the federal government of Nigeria, State Pilgrims’ Welfare Boards, Private Tour Operators, and the general public for any embarrassment the situation of the past few weeks might have caused them and the country.

The commission specifically apologised to 1,552 intending pilgrims of Bauchi, Plateau and Kano States as well as those under the Private Tour Operators who could not make this Hajj due last-minute setbacks that frustrated its plan to conclude airlift of pilgrims before the closure of Jeddah Airport.

The Commission in a statement by its assistant director, public affairs, Hajiya Fatima Sanda Usara, assured all the affected pilgrims that they will be refunded their Hajj fares while NAHCON will work towards improving its deficiencies in the 2023 exercise.