As the national and local economy bite harder and Nigerians are feeling the brunt, CHRISTIANA NWAOGU ponders religious charities as the way out of the problems. 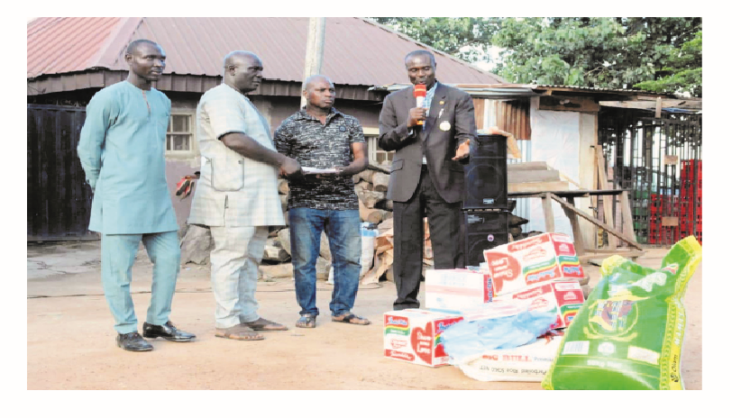 A characteristic element of Christian social engagement in the early church was the care shown for fellow believers as well as those outside the church. In the fourth century, the Roman emperor Julian the Apostate, complained that Christians “support not only their poor, but ours as well; all men see that our people lack aid from us.” From the beginning, Christian presence in the world has been defined by sacrificial service, which remains true today.

This is true because Jesus Christ told his followers that the greatest of all his commandments is to love God and to ‘Love your neighbour as yourself’. Following this teaching, many religious organisations are involved in charity work where they can put this into action.

In fact, the parable of the ‘Sheep and Goats ‘strongly encourages Christians to take action to help those in need. In this parable, Jesus makes it clear that a life worthy of the reward of Heaven must involve actively helping people in need. Jesus explains that helping a person, no matter how low in status the person may be, is just the same as helping Jesus himself.

This weekend, in imitation of the early Christians, the Mountain Of Fire and Miracles Ministries (MFM), Tent Makers Pastoral Ministries (TMPM), Nyanya zonal headquarters, located at Area A, last road, a full gospel ministry devoted to the revival of apostolic signs, Holy ghost fireworks and the unlimited demonstration of the power of God to deliver to the uttermost, demonstrated this love in a care outreach ‘Take Them A Meal’, themed; ‘Christ Love And You’. Their target area was the Nyanya Community in the Federal Capital Territory (FCT) Abuja.

The senior Pastor, Tent Makers Pastoral Ministry, MFM, Nyanya, Abraham Terence Terlumun, said the gospel charity, which included bags of rice, a heap of tubers of yam, cartons of noodles, various other food items and several ‘Get –back-to school materials’ to its target community was inspired by the church tradition of corporate social responsibility.

The cleric, who further explained that the rescue missions  was also aimed at winning new souls for Christ expressed the confidence that the outreach programme will help in restoring believers who have stumbled into sin, wrong doctrine, and potentially from the faith.

While explaining that the Nyanya branch of the TMPM of the Mountain of Fire Ministries  is committed to spreading the gospel of the grace of God as revealed in the word of God said, he said their goal, consist of taking the Gospel and sometimes; aid, relief, or other services to another place that needs it more desperately than where we are currently located.

His words,’It is the vision of our General Overseer, Dr. Daniel K. Olukoya. that the host community wherever the church is located must be cared for. Since we came to Nyanya ,  there has been no crisis since we arrived and we have had peace. So, we decided to come visit the Palace and show our own Christ love to the community like Christ our role model did”

The pastor also announced that the church had since commenced a 70-Day prayer and fasting programme to commit the entire community to God as a cleansed people.

Pastor Terence said, “The church is here to give back to the community in celebration of the love of Christ. We brought the gospel and incidentally, it was a family deliverance programme. The moment Christ locates the family which is the hub of the totality of human beings, peace will be witnessed in every sphere of human endeavour.  We hope to achieve peace in this place by bringing Jesus to them”.

The outreach programme “Take Them A Meal” which was tagged ‘Christ Love And You’, came after a power packed healing and deliverance session in the community.

The associate Pastor, TMPM, MFM, Nyanya 11,  Solomon Yakubu , said such an outreach has become a commonplace in the church because people are living these days without adequate awareness of the demonic forces from their ancestors.

He stated thus;“It has become mandatory that this kind of crusade should be held so that people become aware and come out of the predicaments they are in. This is because it is only the name of Jesus Christ that can deliver people from their ancestral bondages,” he said.

Accepting the items, on behalf of the traditional ruler of the Nyanya community, Prince Afa Dalandi, assured that the charitable donations will have a significant impact in the lives of the community people in the face of the dire economic situation experienced in the country.

The Prince said, “I thank MFM in Nyanya for remembering us at this critical time. We are grateful. It is a deep message of love and we appreciate it. This is timely considering the fact that there is hunger in the land and times are really hard.  We particularly appreciate the church for considering our children with these School materials.

He said, “The truth is that Jesus is the Prince of Peace. Nothing can be achieved outside of peace and the transformation that the nation is also desiring can only be achieved when Jesus set-in in a community,” he said.

Indeed, the example from the early Christians stand as a laudable model of responsible and faithful social reform. As Nigeria has grown more complex, the basic posture of Christians remains the same. As Pastor Daniel Kolawole Olukoya put it, Christians in antiquity “devoted themselves to philanthropy” and work to meet human needs.

The same remained true for MFM’s efforts at effective compassion through charity and the gospel. It is good to know that today’s Christians can find good examples and models for faithfulness in the Christian past. Our great calling is to be faithful in the present age.

According to the MFM General Overseer, “As a believer, our love for God should not be mere lip service or untrue but genuine, unfeigned and profound. Also, God expects us to prove our love by requiting and showing it to Him and others. As He has amply and convincingly proved His love to us, He wants us to do the same to Him and others, Prince Danladi added.