It is no longer news that the collapse in oil prices, coupled with COVID-19 related disruptions, expectedly plunged the Nigerian economy into severe economic recession, with most households facing increased economic precarity. CHRISTIANA NWAOGU writes on the need for local NGOs to assist those in need, and provide food for starving Nigerians.

by Christiana Nwaogu
in Feature
0 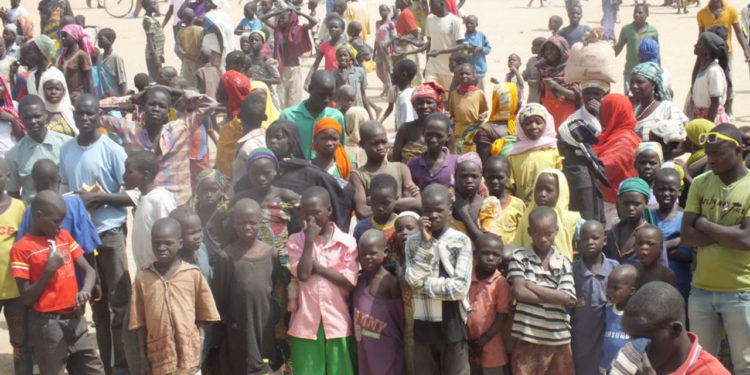 While the COVID-19 pandemic crippled livelihoods in many households across the country, it left in its wake children and adults suffering from hunger across several communities. In fact, hunger in Nigeria remains an immense problem that has put many states and families at risk in the country.

The ugly sight of the masses toiling under excruciating economic condition and the rate at which poverty has eaten deep into the country is not only frightening  but heartbreaking.  This devastating national situation has left over 70 million unemployed and has thus, forced them to venture into the battle and cry for survival.

No doubt, the COVID-19 pandemic has been a critical contributing factor in the ongoing rise in hunger in Nigeria. Records even has it that one-third of the population does not even  have a job. Additionally, 70 per cent of Nigerians lost at least one form of income because of the pandemic between 2020 to date.

Sadly, food inflation also skyrocketed, worsening the state of hunger. Food inflation reached a 15-year high in 2021, rising to 22.95 per cent in March. Import restrictions on rice and rising fuel costs have both contributed to this inflation. Overall inflation and poverty levels have been on the rise, further compounding the hunger crisis

Regrettably, in the midst of this hunger, Nigeria, the once admired tourism hotspot has been enmeshed in a firebox of

Insecurity which has led to scores of deaths of innocent civilians, some members of the nation’s  security personnel, elected officials and many  overnment workers.

The insecurity challenge has  assumed formidable dimensions forcing the country’s political and economic managers and, indeed the entire nation, to rue the loss of their loved ones, investments and absence of safety in most parts of the country.

This is even as the number of violent crimes such as kidnappings, ritual killings, carjacking, suicide bombings, religious killings, politically-motivated killing, violence, ethnic clashes, armed banditry and others crimes has increasingly become the new normal in the country.

The thirst for blood and the preference for violence in expressing  pent-up frustration and disenchantment with the state, its citizens and nation is no doubt overwhelming too.

For many economists and security experts, conflict in Nigeria has contributed to the current hunger crisis. The impact of conflict in Nigeria is especially apparent with food inflation. Food costs have risen due to conflict between farmers and herders in the agricultural sector, as well as the ongoing insurgency by the Boko Haram terrorist organisation.

Further, the ongoing conflict has made the state of hunger in Nigeria even worse by displacing many Nigerians. The states of Borno, Adamawa and Yobe for instance, which are at high risk of widespread hunger, have also seen mass displacement due to conflict. In recent years, 8.7 million people have experienced displacement in these states due to the violence that “non-state armed groups” instigated

These large numbers of displaced persons often move into host communities that are ill-suited to the task. Such communities end up under the tremendous strain, as they have insufficient resources to carter for the IDPs.

In fact, a large part of the nation’s wealth which would have been to the rescue, is simply stolen through inflated contracts, fraud and other dubious methods by those at the corridors of power.

Conventional wisdom dictates that insecurity rises with poverty because; poverty impairs the people’s ability to pay their bills and provide basic necessities for their house-holds and dependent relatives. Poverty constitutes a major threat to national security and development. This is because the poor people, especially the youth could be manipulated to undermine national stability and cause violent disorder in the country at any point in time, thereby making it difficult if not impossible for any meaningful development to take place.

Interestingly, respite , however came the way of some households across 28 states as  children and adults suffering from hunger across several communities benefited from the intervention by NEAR Foundation, an outreach, which most of them described as ‘the best move.

The foundation, a Non-Governmental Organisation (NGO) during the  just celebrated Eid-el Kabir celebration donated 1,763 cows (packed in pieces of 4kg meat ) to the less privileged in 28 states across Nigeria.

Established in February 2021, NEAR Foundation aims at providing service to humanity in order to minimise the level of hardship in the society. The foundation provides humanitarian aid in affiliation with its stakeholders. The aid provided by the foundation spans across four major relief categories, which are health, hunger, water and education.

By tradition, the meat distribution was done to make not only Muslims who cannot afford meat happy, but also Christians to celebrate on the festive day.

President of the Foundation, Behlul Fatih Basaran, said the initiative was conducted in affiliation with its stakeholders to serve humanity irrespective of religious or cultural background.

According to him, they also distributed over 28,000 hunger relief packages across 24 states in the country, during the Ramadan period.

He said, “The hunger relief packages were distributed to the less privileged families during Ramadan, El Kabir and also in times of need especially now that COVID-19 has sunken the economies of many nations.

“Apart from the Ramadan relief packages, we have also distributed over 15,000 provision packages to the less privileged families to alleviate hunger and lessen the level of hardship in communities. In addition, we also sacrifice about 100 rams every month and distribute the meat as sadaka (charity) in different states in Nigeria,” Basaran said.

On health, he said the foundation had done 13 health screening programmes in different states.“We have done 13 health screening programmes, where we diagnose and treat patients together with our volunteer doctors. This has been done in different states, including Abuja, Kaduna, Yobe, Kano, and Lagos. We have been doing it in collaboration with Nizamiye hospital, Jabi, Abuja.

“The health screening is being carried out in IDP camps (Internally Displaced Persons), orphanage homes, rural villages and government owned school in collaboration with the FCT Universal Basic Education Board,” he said

He said the foundation performs different surgeries to patients who need it urgently in a situation of life or death and the patient cannot afford the said surgeries.

“To complement the healthcare delivery system in Nigeria, the foundation raises money to procure drugs and surgical equipment to be donated to public schools and rural community’s clinics and dispensaries,” he said.

Basaran said the foundation had been giving scholarships to indigent students with academic excellence in public secondary schools and universities, respectively.

He said so far 552 students have been enrolled in the scholarship programme.

According to him, the foundation had drilled a total number of 71 boreholes in government public schools in Nigeria.

“Water is life, as such, everyone has a right to clean water, safe and clean community. Clean water plus good hygiene practices are essential for the survival and development of people especially with the emergence of new social protocols which dictates that keeping good hygiene and washing of hands is an important means of curbing the spread of COVID-19,” he added.

He continued: “What we did differently from the past fasting period, this year we collaborated with the Nigeria Defense College (NDC) Alumni. We organized our fallen heroes from the army, navy, airforce and chief of army staff and also police. We called 400 widows from each department.

“We have been celebrating together with them and giving them the packages which we have and gifts for their own children because they sacrificed their life for our country. And that is why we want to just remember them and honour them. It was very honourable for us also to be together with them.

“And next activities by the grace of God all these things will be repeated again with our fallen heroes and second activity, which we have done with the FCT Emergency Management Agency (FERMA), what we did in studio we have organised during the lunchtime, 11 Different IDPs were brought 50 People from each camp.

He said the feedback they had been getting has been motivating them to do me.