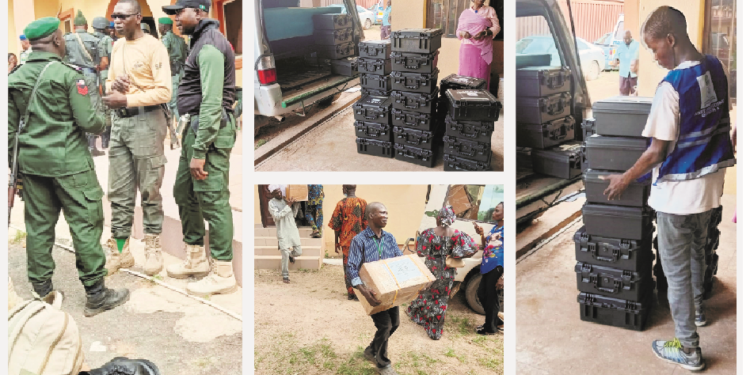 Security operatives yesterday took over all the nooks and crannies of the state to ensure a hitch-free exercise in the governorship election billed to hold in Osun State today.

The police had on Thursday evening exhibited their strength through road shows round the state capital to send signals to whoever may be planning to foment trouble.

It would be recalled that the Inspector General of Police, Baba Alkali, had disclosed during a stakeholders’ meeting with the Independent National Electoral Commission (INEC) that no fewer than 21,000 police officers would be deployed to the state for the exercise.

Also, the NSCDC had disclosed that 11,226 of its men and officers would be deployed for the exercise.

No fewer than 15 political parties would participate in the election today, including the incumbent, Governor Adegboyega Oyetola, who is the All Progressives Congress (APC) candidate; Ademola Adeleke of the Peoples Democratic Party; Akin Ogunbiyi of Accord Party; Lasun Yussuff of Labour Party; Goke Omigbodun, Social Democratic Party; Kehinde Atanda of Action Democratic Party, and Adebayo Elisha of Action Peoples Party.

The resident electoral commissioner for Osun, Prof Abdulganiy Raji, disclosed that out of 1,955,657 registered voters in the state, 1,335,298 voters have collected their permanent voters card and are eligible to vote at the 3,763 polling units in the 332 registration areas across the state.

Meanwhile, INEC has commenced the distribution of sensitive materials to the 30 local government areas and Ife East area office.

The exercise which started late yesterday had in attendance security operatives and electoral officers of the local government areas who took charge of the materials amidst tight security.

Speaking, the REC said the materials were distributed early to ensure a hitch-free commencement of the exercise on Saturday.

A visit by our correspondent to Olorunda local government INEC office revealed that the allocation of insensitive materials to packed buses for onward delivery to the polling units at the appropriate time had commenced.

A statement by the secretary to the state government, Prince Woke Oyebanji, enjoined citizens of the state to conduct themselves peacefully.

According to the statement, adequate security is guaranteed for law abiding citizens, as all the security operatives are on ground to ensure there is no security breach.

Yesterday, the chairman, National Union of Road Transport Workers (NURTW), Oroki, Osogbo, Kazeem Oyewale, aka ‘Asiri Eniba’, was arrested by soldiers at old garage motorpark in Osogbo at about 1:00 pm.

It was gathered that when the soldiers swooped on the motor park to arrest Oyewale, his boys, in an attempt to resist arrest, tried to block them.

After his arrest along with about four of his boys, the remaining boys started throwing stones at the vehicles of the soldiers, sparking sporadic gunshots in the air by the soldiers.

The Peoples Democratic Party (PDP) had dragged INEC and the state government to court asking for the ban on Amotekun from participating as security operative during the governorship election.

Justice Ayo Emmanuel, in his ruling, restrained the security outfit from participating as security operative during the election pending the determination of the suit as he adjourned the case till July 20, 2022.

The party alleged that APC has deployed billions of naira to compromise some security and electoral officers to intimidate voters, manipulate the electoral process to favour the APC candidate, Governor Gboyega Oyetola.

The PDP further claimed that it is aware of how huge sums of money have been funneled to certain compromised security and Independent National Electoral Commission (INEC) officials to execute the alleged scheme.

National publicity secretary of PDP, Hon Debo Ologunagba, said INEC and security officials are reported to have been bought over to among other things, “assist and provide cover for APC agents to prosecute a well-oiled vote buying and violence-triggering scheme.”

Ologunagba, in a statement, said, “Our Party has information on how two prominent APC Governors from the South West, a former APC National Chairman from the South South, certain federal Minister and a particular member of the House of Assembly from Lagos State are coordinating the release of billions of naira to bribe electoral and security officials as well as fund heavily armed thugs imported from Lagos, Ondo, Ogun and other South West States to unleash violence and help the APC to rig the election.

“Our Party also has further reports of how the APC released the sum of N10 million per Local Government Area for INEC officials in all the 30 Local Government Areas in Osun Steta, N7million to thugs masquerading as Amotekun officials and a huge sum of money for propaganda to a certain compromised media outfit.

“The PDP has however been made aware that some patriotic INEC and Police officials vehemently rejected the poisonous offer by the APC.  Our Party salutes the courage and patriotism of such officers who resisted the APC for the love of our country.

“The PDP calls on the Inspector General of Police and the Chairman of INEC, Prof Mahmood Yakubu to take immediate decisive steps to check the activities of police and INEC officials deployed to Osun State so as to avert a breakdown of Law and Order, especially given the manifest determination of the people of Osun State to resist the APC on its evil scheme.”

The PDP demanded that the Police and INEC immediately rejig their formations in Osun State as a step to assuage, reassure the electorate and prevent an impending crisis in the State.

The PDP however urged the people of Osun State to remain undeterred and focused in their determination to free their state from what it called the misrule of the APC.